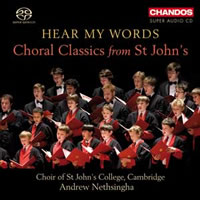 
As exclusive Chandos artists, the Choir of St John’s College, Cambridge here presents its second release. The first CD, of choral music by Howells (CHAN 10587), was released to rave reviews in March this year. Choir and Organ wrote: ‘There is musicianship here of a rare and moving kind.’ This new release of popular choral classics should meet with a similar reception while at the same time appealing to a wider audience.

Established in the 1670s, the Choir of St John’s has a distinguished tradition of performing religious music. Its main duty is singing the daily services in the College Chapel during the University Term. During the University vacation the Choir carries out engagements in the UK and overseas, as well as undertaking a busy recording schedule. This particular release was recorded in the College Chapel in full surround-sound. The disc not only sounds spectacular, but recreates to an uncanny degree the experience of listening to the Choir perform in the chapel. The music itself represents a time span of nearly 500 years of choral music. The earliest piece dates from the first half of the sixteenth century, and the newest was composed as recently as 2007. The styles and genres are varied, but there are clear links between the works throughout. For example, several are based on texts from the psalms, and the works by Pärt, Parsons, and Rachmaninoff offer three radically different interpretations of the Ave Maria. Some of the works also add a solo instrument to the familiar mix of voices and organ. But perhaps most importantly, all the pieces recorded here sit comfortably under the heading of ‘Popular Choral Classics’.

Allegri’s Miserere is counted among the great classics of church music. Part of its mystique stems from its origins; for many years the work was performed only in the Sistine Chapel, and as with other works tied to a single place it became an object for pilgrimage. In this case the pilgrims included Mendelssohn, as well as Mozart who famously noted down the work from memory after leaving the Vatican, thereby risking excommunication by the Catholic Church. This new release also features Stanford’s Jubilate, which was written for Trinity College, Cambridge.

Intended as part of the service of Morning Prayer, it has long been one of the most popular canticles in the Anglican repertoire. In keeping with the text, Psalm 100, the tone is festive throughout.

A great disc of singing, although those not firmly committed to the English choral tradition may find some of the compositions a little too Victorian to hear on a repeated basis.

At last, on SACD we have Allegri's masterpiece "Miserere". In multichannel, it is truly presented in the cori spezzati style, with the solo group placed behind the listener - a truly special effect and highly evocative of what is often executed in cathedrals. The solo group of Julius Foo, Peter Hicks, Thomas Mullock (trebles - who, it sounds like, take it turns to tackle the tortuously high melisma); Leo Tomita (counter-tenor); Tristan Hambleton & Basil MacDonald (basses) are very well matched and give a seamless beauty to their contributions. The rest of the Choir of St John's College, Cambridge under Andrew Nethsingha is suitably reposed and the experience is something that anyone with the faintest love of good music (of any sort) should have, for the tingle that goes up & down the spine is as strong on the first hearing as the hundredth with a performance this good; this alone is worth the price of the disc - bravo!

Next up is Grieg's setting of "Ave, marie stelle", which will be familiar from Grieg: Choral Music - Grex Vocalis and Grieg: Choral Music - Pedersen. Nothing is lost on these "foreigners" and certainly compared to the 2L disc, the St John's performers have less exacting recording that is beneficial to both performers and listeners alike. A pairing of contrasting settings of "O virgin Mother of God" follows from Rachmaninov (part of his Vespers) and Part; in both, Nethsingha draws eloquent sounds from his choir but in impassioned passages, the trebles lack the Slavic bite that one hears from Paul Hillier's ensemble in Rachmaninov: All-Night Vigil (Vespers) - Hillier. A setting by Robert Parsons (c.1535-1572) of "Ave, Maria" rounds off the quartet of songs written in honour of the virgin Mary nicely although the work itself is not of the highest distinction, as is made abundantly clear by the "Exultate Deo" by the contemporaneous Palestrina that follows on directly. In both, the massed voices lack the clarity of The Sixteen or the Tallis Scholars in this repertoire but the performances are still good - just not, perhaps, excellent. Interestingly the "Agnus Dei" by Tallis does not suffer so greatly from these characteristics and the effect is meltingly beautiful and sends the spirit soaring to heights almost as great as in the Allegri.

The second newest (1997), but the most modern sounding composition is now heard, "A New Song" from James MacMillan in which verses 1, 2 & 13 of Psalm 96 are set. This is one of many songs that MacMillan has written for his local parish church and marks the first item that requires an instrumental accompaniment - in this case the organ, played by Timothy Ravalde. Highly evocative of the text and highly contrasting even though the choir is only in 4 parts and the organ is far from domineering, it is by far the most dramatic piece on the disk despite its relative brevity of 5 minutes duration. The second accompanied work, Franck's sublime "Panis angelicus", follows and allows Pablo Strong (tenor) to demonstrate his beautiful singing of the solo after a touching introduction on the cello from Graham Walker; like that of the Allegri, the climax in a performance like this one touches even the stoniest of hearts. Rounding off the first group of accompanied works is Stanford's "Jubilate Deo" which is taken from the Morning Service, Op. 10. Despite the ardent advocacy that Nethsingha extols, this is hardly the musical match of other works here and it would not be surprising for many listeners to pass over this on repeated playing of this disc.

Returning to a cappella music, Vaughan-Williams "O taste and see" - written for the coronation of Queen Elizabeth II, brings into sharp relief just how pedestrian Stanford's writing sounds to modern ears. Thomas Mullock (treble) seizes his brief chance to shine with aplomb. The next composition is a contribution from one the most prolific living composers to the choral medium: Rutter's "O Lord, thou hast searched me out" (2007). This contains a lovely cor anglais melody that weaves in and out of the choral textures, most tenderly played by Helen Scarbrough. Faure's "Cantique de Jean Racine" is now heard in an arrangement for choir, organ & cello (the original can be heard here: Fauré: Requiem - Spanjaard) and is scarcely less effective in these hands. Closing the disc is Parry's "Hear my words, ye people", the longest work on this disc (just), giving a solo opportunity to Edward de Minckwitz (bass) and employing a semi-chorus in addition to choir and organ accompaniment. Like the Stanford, this is not first class music and it must surely have been possible to programmed a more inspiring choice of compositions.

The sound is in the best traditions of the Chandos house style: rich, reverberant but not cloudy - in fact, just like a fine ecclesiastical acoustic! The notes are helpful and translations into English (only) are provided together with some lovely photos.