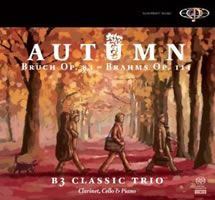 A disc that promises much in that these lovely miniatures by Bruch are far too seldom performed but the playing leaves a great deal to be desired. There tuning problems with both the clarinet and cello lines added to which their playing and that of the pianist is frequently boring from a musical standpoint. It as though one is listening to robot made performances for the markings are largely obeyed but at no point do they communicate with one iota of feeling. This will be immediately apparent to those familiar with the Brahms and they sound as wooden as their instruments. I know amateurs who could make a better fist of these works...

The sound is good but nothing like exceptional enough to redeem this release anywhere near recommendation status. For the Brahms, Brahms: 2 Clarinet Sonatas, Clarinet Trio - Fröst, Pöntinen, Thedéen, is better in every way imaginable.

Taking a calculated risk, the members of B3 Classic Trio approach Bruch’s 8 Pieces and Brahms’ chamber masterpiece with an insistence on hearing the works anew. The rewards of giving B3 a patient audition will justify the effort.

To understand the goal of this recording necessitates a careful reading of the liner notes. Explaining their decision not to sequence Bruch’s 8 Pieces Op. 83 in what has become the standard concert performance order, B3 cite the composer’s own writings in which he states that there is no set order for performance, nor should all the pieces necessarily be performed at the same time. The ensemble aims to focus attention on a work they believe has been neglected, and by reordering the conventional sequence of the pieces, invite the listener to participate more actively in the musical process. In furtherance of that goal, they have opened an interpretative space that allows each member of the ensemble room for individual expression.

Recording the trio in high resolution in the focused acoustic of a small studio rather than a concert hall or church emphasizes the stylistic tension between clarinetist Joan Borràs, whose “cool” tone avoids vibrato and exaggerated phrasing, and cellist David Johnstone, who plays very emotively and draws on the full palette of vibrato and bowing effects. In the first selection of the 8 Pieces, Op. 83 VIII, that tension becomes distracting, and is exacerbated by the clarinet playing very slightly flat in relation to the piano and cello. By the second selection (Op. 83 VI), the intonation problem has been resolved and the cello and clarinet are well balanced by the judicious performance of pianist Joanjo Albinyana.

Heeding Bruch’s own advice, and mindful of different listeners’ capacity to tolerate imperfect intonation, some may wish to skip track 1 and start the SACD at track 2. The rest of the 8 Pieces are strikingly performed, with moments of fire, insight and lyricism. Each is written in a different key, which lends diversity of tone to the work considered as a whole. This adventurous performance, even with its minor flaws, is a welcome addition to the 20th century chamber repertoire in high resolution audio.

The Brahms Trio Op. 114 is well-represented on modern recordings, including four SACDs listed on this site. The performance by Martin Fröst on BIS is consistently faster throughout, but B3’s moderate tempi allows the music to unfold and build gradually to an riveting climax in the Allegro movement. As in the Bruch 8 Pieces, clarinetist Borràs plays without vibrato. The sense of holding back generates some tension during the Adagio movement, and taken overall, shifts attention to the piano parts, which are performed with verve and intelligence. Close microphone placement situates the listener in the front row for this intimate performance. Even in forte passages, the recorded sound never becomes strident or harsh.

Whether B3’s interpretive risk-taking succeeds or fails is ultimately a subjective judgment. Intention is the prerogative of the artist; the responsibility of the audience is to participate in the experience by bringing full attention to the act of listening.