Which Honeck? Slip of the pen, I suppose. The sleeve says Rainer. 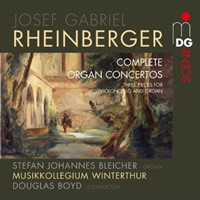 
Prime Mover
The historic Walcker organ in Winterthur may well have been the prime mover behind this production of Josef Rheinberger’s organ concertos on SACD by Stefan Johannes Bleicher and the Musikkollegium Winterthur under Douglas Boyd. The concertos are complemented by Rheinberger’s three rarely performed Pieces for Violoncello and Organ, with Cäcilia Chmel, the orchestra’s solo cellist, impressively displaying her talent.

Royal Success
Josef Rheinberger committed his first Concerto for Organ and Orchestra to paper in June 1884 within a mere seventeen days. Instead of prescribing a classical solo role for the queen of instruments, he registered the organ toward the goal of the total blending of its sound with that of the orchestra. The work’s success proved that he was right. After its Leipzig premiere the concerto made its way around the world. Ten years later Rheinberger wrote his second Organ Concerto in G minor – and it was no less successful.

Perfect Harmony
Initially only a few composers, most of them from the Baroque, ventured to combine the organ and the orchestra, two instrumental instances suggesting competition rather than cooperation. Aristide Cavaillé-Coll, who designed the first “symphonic organs” in orchestral sound during the nineteenth century, paved the way toward greater harmony. Today’s organ in the Winterthur Town Church stands in this tradition.

Swiss Confederation
The Musikkollegium has been active in Winterthur since 1629 – which makes it one of Europe’s most richly traditional musical institutions. Interestingly, the orchestra has repeatedly contributed considerable sums for the maintenance of the organ during the town church’s own long history. Its decisive redesign as a romantic instrument in 1888 was carried out by the Walcker Company. Ever since then its powerful Prinzipal-Bass 32’ and special intonation have been a perfect match for the town church’s acoustics as well as for the orchestra’s highly ambitious goals.