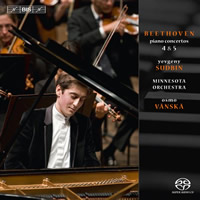 These are wonderfully satisfying performances in the grand tradition of “old school” interpreters. Let me explain. The Minnesota is a large orchestra that plays on modern instruments using normal vibrato techniques and the solo piano employed is a modern Steinway D with all of its characteristic fullness and tone. There are no odd tempo choices and no weird cadenzas are played. It’s just a good, old-fashioned romp through two of the greatest piano concertos ever written.

It seems that more often than not these days, new recordings of these oft-recorded masterpieces resort to some twist or another in order to distinguish themselves from the crowd. There is a recent example on SACD from BIS itself in the LvB concerto series from Brautigam and Parrott where the twists were the use of a smaller modern instrument band playing in a HIP manner with a modern grand piano situated in their midst for the recording. Don’t get me wrong – I praised that series of recordings because of the very committed performances of all involved and the rather unique sound made by that group of musicians that brought freshness to these warhorses. There is room for many approaches in this repertoire. However, don’t look to this present recording if you want something outside the mainstream - and that suits me just fine.

Unlike Maestro Vanska’s excellent LvB symphony cycle which to my ears sounded almost chamber-like in character at times bringing a fresh perspective to the pieces, his approach here is refulgent and large-scaled. What a fine orchestra Vanska has shaped in Minnesota! Pianist extraordinaire Sudbin easily possesses the chops for this music. He is in complete control of the keyboard and brings sensitivity and power to the music as required. There was no point throughout both performances where I sensed any lack of synchrony between soloist, conductor or orchestra. Further details of the playing are unnecessary – one could stack this up against the “greats”(whichever yours happen to be) and it would not be embarrassed by any measure.

The recorded sound is splendid. The recordings were made in Orchestra Hall, Minneapolis, MN in June, 2009 (Concerto 4) and June, 2010 (Concerto 5) by sound engineer Hans Kipfer. Everything sounds natural – the solo piano is nicely integrated into the sound picture and never sticks out like in so many concerto recordings. The orchestral foundation is well represented (this is a must for ultimate realism) and the strings never screech. There is a also an excellent balance between the direct and reverberant sound such that details are never lost amidst the wash of sound. The soundstage is large and realistic. Very well done!

For traditional and expertly-played versions of these works in top-notch sonics, I can recommend this SACD very highly. Let's hope that all concerned complete the project with the remaining piano concertos (and a special plea to include the violin concerto with Vadim Gluzman, please!) 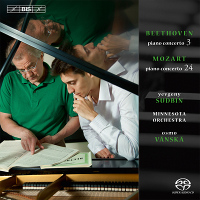 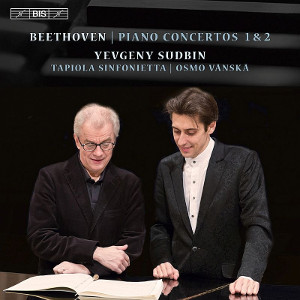