Well Graham, I am very satisfied with these performances. Individual works may not be first choices but it is a nice collection of Mozart's popular works at a fair price ... 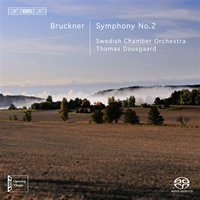 
On disc as well as in concert, Thomas Dausgaard and his Swedish Chamber Orchestra have attracted a growing international interest. The team regularly visits some of the world’s leading concert venues, and just recently their performance of Schumann’s Second Symphony at the BBC Proms made a great impact on audience and critics alike.

Precisely Schumann’s symphonies have featured in Dausgaard’s and the SCO’s series ‘Opening Doors’ on BIS, in which Romantic symphonies are performed with smaller than usual numbers – to great critical acclaim: ‘The most perceptive Schumann cycle in over three decades’ was the verdict in International Record Review. The sequel to the Schumann recordings was a disc combining Schubert’s Unfinished and Great C major Symphonies, described in BBC Radio 3’s CD Review as ‘a crisp, clean account that somehow seems to strip away layers of silt to get a clear view of the colours underneath.’

Dausgaard and the forty-odd members of the SCO now take on a composer whose symphonies often are regarded as the epitome of Romantic grandeur, not to say bulkiness – Anton Bruckner, and his Second Symphony. The recording thus becomes a sort of test of how the ‘Opening Doors’ concept can be applied to music from the High Romantic period. Thomas Dausgaard himself finds in this work ‘a feeling of a very personal prayer – as if Bruckner was meditating and improvising at the organ’ and goes on to describe the experience of performing it with the SCO as ‘a kind of collective chamber-musical improvisation with a strong symphonic undercurrent. I hope Bruckner would have liked it...’

The rebels are at it again – Bruckner performed by a chamber orchestra! I count a grand total of 33 musicians (not including conductor Dausgaard) in the booklet photo. Certainly, this HAS to be a disaster, right? Well, no. In fact, it is bracing and refreshing to hear Bruckner’s 2nd symphony in this clothing. Firstly, the Swedish Chamber Orchestra generates a lot of sound for so few musicians. The venue, the Orebro Concert Hall in Sweden, seems to be an ideal place for this group and the sound is a perfect balance between direct and hall sound. Many large orchestra Bruckner recordings are done in huge acoustic spaces (like cathedrals) where the reverberant signature is such an integral part of the soundscape. Here, however, the setting is a bit more intimate and it matches the playing perfectly.

Dausgaard employs the 1877 Version edited by Nowak which is one of the most commonly played editions of this symphony (only the Hass 1877 edition has more recordings extant). Of the three other versions I have on hand (all RBCD), Solti/Chicago use this same Nowak edition while Haitink/RCO employs the 1877/Haas and the Tintner/Naxos uses the early 1872 score. To my surprise, Dausgaard at 61:38 has a longer total time than both Solti at 55:34 (maybe not that surprising – it’s Solti after all) and Haitink at 58:21. I might have expected Dausgaard to move things along at a good clip in order to ameliorate the small orchestra size but that is not the case. Instead, we get a very well-conceived and perfectly paced vision of the music that provides plenty of grandeur where needed. The chamber-sized forces reveal Bruckner’s contrapuntal passages in great detail. The interplay between winds, brass and strings is set in high relief via this performance and sheds new light on the piece. The only thing I miss from a typical large orchestra performance is the low-end heft of large double bass and cello sections (because there are so few players – not due to any deficiency in the recorded sound).

Speaking of sonics, the stereo SACD layer sounds fabulous. Sound engineer Matthias Spitzbarth (who was also responsible for the recent and highly acclaimed Le Sacre du Printemps recording on BIS) delivers a dynamic and integrated sound stage where the instruments sound completely natural. The RBCD competition pales in comparison with violins that sound bleached out and shrill and brass that bites too hard.

If you prefer to wallow in a cathedral of sound for Bruckner, then this recording may not be your cup of tea. However, if you want a refreshing and sonically excellent alternative to the many large orchestra versions, I cannot recommend Dausgaard and the SCO too highly!