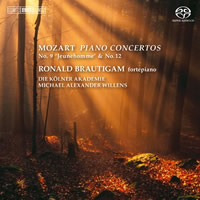 
To a unique degree, Ronald Brautigam has managed to combine highly successful careers as a performer on both the fortepiano and the modern piano. With close to fifty released CDs on BIS, his discography testifies to this, including complete cycles on fortepiano of the solo piano music by Mozart and Haydn, but also four recent discs of Beethoven’s piano concertos played on a modern Steinway.

The present disc is the first in a projected series of Mozart’s piano concertos, for which Brautigam returns to the fortepiano – a copy of a 1795 instrument by Anton Walter – and is joined by the experienced period band Die Kölner Akademie conducted by Michael Alexander Willens.

The programme includes one of Mozart’s earliest master-pieces, the ‘Jenamy’ Concerto (previously known as ‘Jeunehomme’) composed in 1777 before he had moved from Salzburg to Vienna. This is followed by Piano Concerto No.12 in A major, K 414, one of the first Vienna concertos, and a Rondo for piano and orchestra from the same period.

Ronald Brautigam’s ongoing series of Beethoven’s music for piano solo has been met with great acclaim, but his earlier traversal of Mozart’s sonatas and variation were equally well-received, as witness the following quote from a review in Gramophone upon the release of it as a boxed set: ‘Brautigam's imaginative interpretations capture Mozart's many moods, from the galant style of the six earliest sonatas to the aching drama of the A minor (K310).’

From the opening bars, it is clear that this cycle is going to be something very special.

The use of period instruments allows the orchestra to attack (with style, not brutally) the music with a level of panache that would be grotesque on modern instruments - it comes across as vital here. Brautigam's forte-piano also penetrates the textures in the tutti passages to allow the listener that he is supporting the textures as would have been the habit of the day - suggested clearly in the score for the soloist but rarely (audibly) observed by those on modern instruments.

In Mozart's first hint of his mature genius to come in this combination, the effervescent energy leaps out of the speakers in the first movement of the Jenamy (Jeunehomme) concerto. Fortunately for Mozart's music, Brautigam and Willens adopt a flowing yet never rushing tempo for the Andantino. Particularly exciting is Brautigam's use of ornamental embellishments - mirrored by the superb Die Kolner Akademie - upon repetitions of thematic material; unlike some performers who indulge in this practice they never tire upon repeated hearings. The playing is so musical that the only voice we hear is that of Mozart's inspired creations. The rapid-fire Presto is played at a speed that is barely credible that it does not sound rushed but exuberant, yet that is the magic that these master musicians achieve here.

The A major concerto is a more relaxed and sunny affair, with less of the ebullient spirit so vividly conveyed in the earlier concerto but one would be mistaken to imagine that Brautigam's choice of tempos is any less flowing than ideal. The same qualities of improvisatory decoration add touches of beauty to an already gorgeous melodic outpouring - both soloist and orchestra are "guilty" of this approach, one which most listeners will surely find winning if the smile that almost constantly creeps across my face is anything to go by! As an "encore", we are offered the Rondo in A major, K.386 which, unlike in the concertos, has cadenzas provided by Brautigam himself. Such is his musicianship that his seemingly improvisatory approach is as Mozartean as that we have heard earlier.

The sound, from both a technical perspective and also from the instrumental standpoint, is beyond criticism - every nuance is heard without difficulty (partly thanks to the projection given by the musicians) and each part of the aural landscape sits within a convincing whole.

To sum up, this disc makes one hear these well known works as if for the first time - the use of period instruments by both soloist and orchestra is so persuasive it is hard to imagine returning to the accounts of Perahia, Brendel or other giants of the modern piano and orchestras. 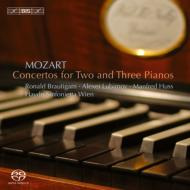 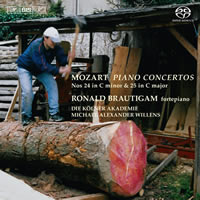 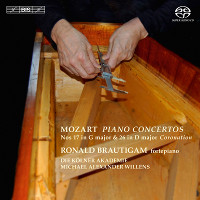 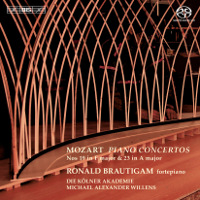 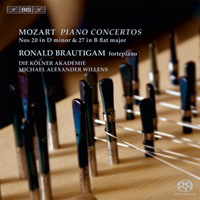 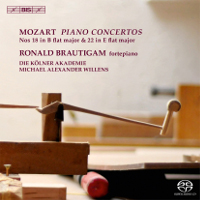 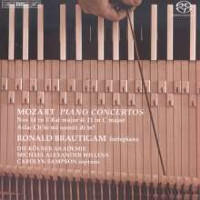 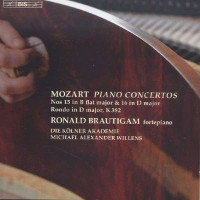 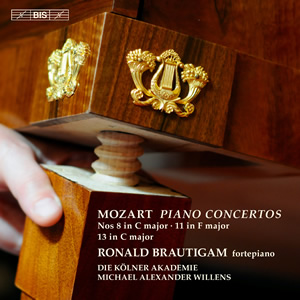 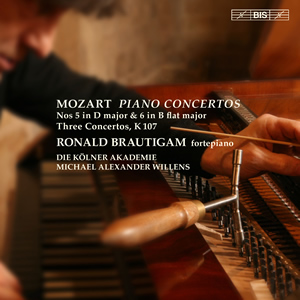 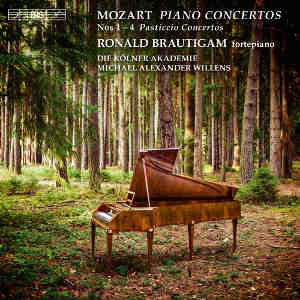