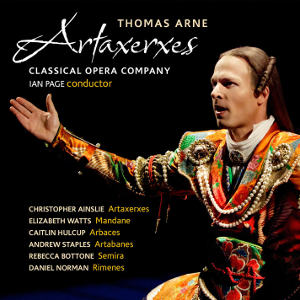 
Released to celebrate the 300th anniversary of Thomas Arne, the composer of Rule, Britannia!, The Classical Opera Company presents the first complete recording of Artaxerxes. The original scores for the opera were burned in a fire in Drury Lane Theatre - only the orchestral parts and the libretto, and some of the music survived. Noted musicologist Duncan Druce recreated the Finale and the Company's director Ian Page the recitatives for this, the new performing edition, which was premiered at the Royal Opera House, Covent Garden, in 2009. The opera contains several well-known arias, including 'The soldier tir'd', made famous by the late Joan Sutherland.

This disc could receive the shortest review ever: Wow!

However, that doesn't do this set justice in two important respects:
1) It is Linn's first ever complete opera recording
2) It is Arne's "full" début on SACD
For both Linn & Arne this is a triumphant success and even though this is the first disc that sees a 2011 release I have received, I fully expect this to be in the running for my favourite disc of the year for it is a revelation both artistically and musically.

Musically because Arne is known by most music lovers only for his patriotic song "Rule Britannia"; the score to Artaxerxes places Arne as a master of English music. It is not for nothing that, as the illuminating notes make clear, Haydn exclaimed that he "had no idea we had no idea we had such an opera in the English language". In this, Haydn was selling the music short, for prior to Mozart's mature compositions, no Classical opera of such refined yet thrilling excitement rivals this one of Arne. From the evidence presented here, it is a tragedy that so many of Arne's scores have perished in the mists of time. Even this work has needed supplements, recitatives from this sets conductor and a finale from the renowned Duncan Druce (who keeps well to the style of the rest of the music). With the exception of two beautiful duets, Arne's contributions are a series of highly diverse arias that range from contemplative and redemptive songs to exhilarating virtuoso display pieces.

Artistically, the set is a triumph for The Classical Opera Company and Ian Page's direction and marks their first complete opera recording. Hopefully this will be followed by many, many more! Whilst all the singers are young and in the early stages of their careers, it can safely be said that all of them comfortably outshine many more established figures in the opera world with singing of such fine calibre. All tailor their tones to the emotional context of the music, especially poignantly in the more reflective music. It will come as no surprise to discover that Arne's wife was the original Mandane, for the display role is extraordinary and the sheer virtuosity of Elizabeth Watts is quite breathtaking - live, this would deservedly receive tumultuous applause. The characterisation and artistry of the remaining singers is no less special but Watts' contributions stand out, even in such a strong field. The diction from all singers, even in the finale where there is ensemble singing is so clear as to make the supplied libretto all but superfluous! The orchestra gives support that is fully worthy to Arne's music and the singing present; Ian Page makes the score fizz with life where appropriate and encourages a tender restraint in the more emotionally charged numbers from all concerned. The thought that this ensemble should be recording Cosi fan Tutte kept occurring - here's hoping!

Linn wisely chose to record this in the recording studio as, live, there would have been numerous interruptions from audiences rightly applauding superb musicianship. The balance and clarity achieved at Air Studios leave no room for complaint - the sound is vivid yet with a pleasing sense of room around each musician (even in the most dense and fast passage work).

I cannot recommend this too strongly, so let me end it by saying "congratulations" all round and that this is truly a set to banish the wintry gloom!