This is the complete orchestral recordings on DG by Böhm on 70 Cds. if I understand it correctly only the Mozart symphonies are on Blu-5rqy. 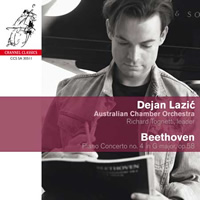 
In purely musical terms, this 'outcome', with the Australian Chamber Orchestra directed by Richard Tognetti, is a mixed form or combination, in which the well-known version for piano and (symphony) orchestra, performed as usual with a conductor, is brought together with the newly discovered chamber version for piano and string quintet.

... In Beethoven's time it was customary that the soloist, who was often a composer as well, improvised the cadenzas. Beethoven personally challenged the young Franz Liszt not only to compose more, but also generally to improvise more at the cadenzas. I have therefore taken the liberty of writing my own cadenzas for the first and last movements.

... In both sonatas, Beethoven writes the menuetto/scherzo as second movement, instead of as third as was customary. Generally speaking, the term romantic irony links the two sonatas to the piano concerto. Around 1800, Friedrich Schlegel had already formulated his concept of romantic irony, and Ludwig van Tieck employed it slightly later in his literary comedies.

From: liner notes by Dejan Lazic