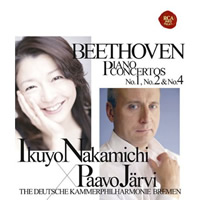 On the occasion of Ikuyo Nakamichi ‘s forthcoming visit to France, where she will be playing Beethoven at ‘La Roque d’Anthéron Festival’ (on the 14th of August, to be precise), I thought this would be the right moment to turn my attention to her and listen to ‘what she has to say’ in that respect. With Dietmar’s positive review in mind, I felt confident to fork out the necessary funds to have this double disk come all the way from Japan. I do not regret it.

The Beethoven piano concertos are now well served on SACD and (briefly) comparing different versions seems logical. I will limit myself to the complete versions of Mustonen and Brautigam, including nonetheless Sudbin, as I understand that his first disk (Beethoven 4 and 5) is part of a complete set in the making.

The most striking point for me is that they are all completely different.

Mustonen’s account may please some, giving a new, fresh insight in these so well-known concertos. However, after a couple of hearings, the novelty of his peculiar tempi and accentuations wears off quickly. One becomes aware that his approach tends more towards narcissism than a genuine attempt to reveal yet undiscovered new elements. The balance between piano and orchestra is fine, while the quality of the orchestra and the recording are well above average.

Brautigam’s set has been hailed elsewhere, but not everywhere. It is understandable that his account, with the support of a ‘period’ chef, Andrew Parrott, leads to controversial opinions. Outer movements, especially the final movement of the 1st, come off in such a rush that one almost believes as though the musicians still have to catch a late evening flight home. And for a historically informed approach, there also seems to be a miss-match in that Brautigam’s virtuoso playing breathes more Mozart on a period piano than Beethoven on a modern concert grand. As a result, the struggle between orchestra and piano in the second movement of the 4th disappears in a faster than usual pace and lack of controversial dialogue. The playing is nonetheless coherent throughout, with the piano well balanced in relation to the orchestra. There still is much to admire from soloist and orchestra alike.

Sudbin brings us Beethoven as many feel it should be. With a large orchestra, lush strings, correct tempi. His sensitive yet energetic playing commands respect. The balance between piano and orchestra is excellent. All the more reason to look forward to forthcoming issues. What I feel is missing though, is the intimacy of a smaller orchestra, where the winds can take their equal part and thus add extra colourful detail.

Where does Nakamichi stand in all this? As I said above, all the versions are totally different. If I have to characterize each in one or two words, then Mustonen’s is ego-centered, Brautigam’s is high on virtuosity but less so on substance, Sudbin’s is beautiful and largely middle of the road, whereas Nakamichi’s approach is more like a ‘love affair’.

But this is not just an affair of roses. It’s full of passion, tenderness, care, and wit. The interplay with Paavo Järvi and his Deutsche Kammerphilharmonie Bremen is perfect. As we can see on the video that has been made of this set (YouTube!), she not only looks frequently to the conductor, but also seems to be keeping in touch with different members of the orchestra.

Another noteworthy observation from the video concerns the obvious pleasure she draws from playing these concertos. And this clearly shines through when listening to the recording. She creates a feeling of happiness, sometimes tender and delicate, sometimes passionate and overwhelming.

In her tender moments, tempi are restful, taking time to carefully express every note as though she is whispering in your ear. Her passionate ‘attacks’ do not offend but draw you into her world of musical joy. It’s a wonderful mix of womanly and exquisite yet passionate Beethoven.

For me, it is not clear who inspired who and to what extent. Järvi’s Beethoven is mostly clean, precise and free of unnecessary drama. And such is the case here, too. But on the other hand, he is someone who does not easily show his emotions. Being a gifted musician, in many ways surpassing his father, one assumes that he has many emotions hidden behind his well-composed face and attitude.

Do we have here a case of mutual, platonic love, where both instinctively follow the other in musical expression? Pure speculation, of course. But one can’t help thinking about these things when listening to the beauty of their musical complicity.

But, alas, nothing is one hundred percent perfect. Although the recorded sound is excellent (guaranteed by polyhymnia), a too dominant piano puts the listener directly in front of the grand, with the mechanical noises that come with it.

All in all, highly recommended, especially for the days you need something more than just Beethoven. 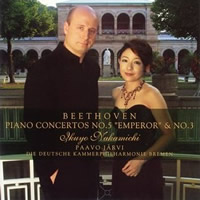 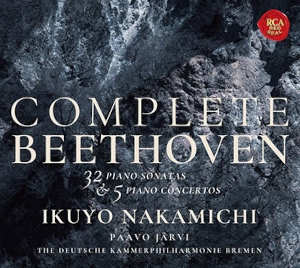