Sound The Bells! - The Bay Brass 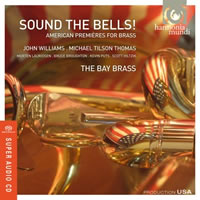 
San Francisco-based ensemble The Bay Brass presents a showcase of American music both rousing and moving with these first recordings of recent works by John Williams, Michael Tilson Thomas, Morten Lauridsen and others.

The Bay Brass formed in 1995, comprising musicians from the San Francisco Symphony, the San Francisco Ballet and the San Francisco Opera orchestras. This disc, subtitled "American Premières for Brass" offers a nicely varied programme played by the main Bay Brass complement of 4 trumpets, four horns, four trombones and a tuba. Guest artists add to the ensemble in most of the pieces, adding another three trumpets, three horns and a very large percussion department. Piano and Harp appear only in the first track.

Many of the pieces were commissioned by, or written for, The Bay Brass, by some of the most important contemporary American composers who have a particular affinity for brass. Some of the composers conduct or direct their own pieces for the recording, and each writes some notes about their pieces for the insert booklet. This must have added to the general session atmosphere, and it has certainly produced some fabulous solo playing and phenomenally tight ensemble. Even the group's just audible intakes of breath are in impressive unison!

Three fanfares open proceedings, contributed by the doyen of film composers (and Music Director of the Boston Pops), John Williams. The titular 'Sound the Bells', celebrates the announcement of the Crown Prince of Japan's engagement, of interest because the Boston Symphony has had a long association with Seiji Ozawa. It makes a spectacular opening to the programme; brilliant, clangorous and disporting a very fine bass drum in perfect balance with the brass (eat your heart out, Telarc). The auditorium at Skywalker Sound positively resounds to the glorious noise, with abundant output from the rear speakers giving the listener a real sense of presence at the venue. The following 'Fanfare for a Festive Occasion' is suitably filmic (echoes of Superman), as is 'Aloft! To the Royal Masthead' which Williams wrote for the visit of Prince Phillip, Duke of Edinburgh to a gala concert at the Boston Pops. Its rapid triple rhythms, however, didn't remind me of Columbus and his tall ships or the Prince's naval career, but rather evoked a vision of a hotly-pursued Harrison Ford galloping into the auditorium.

'Street Song' by Michael Tilson Thomas (and conducted here by the maestro) is really an interweaving of three songs, quite a substantial piece which shows off many aspects of the brass ensemble, with much antiphonal dialogue between instrumental groups on opposite sides of the sound stage. At the opening, Britten came to mind, and later Janacek, with frequent nudges of Jazz.

Morten Lauridsen, although born in Denmark, is now one of America's most famous choral composers, indeed his 'O Magnum Mysterium' setting for a capella voices is popular around the world. His arrangement of for brass is deeply moving, with trumpets carrying the melodic line above a rich carpet of tone clusters; the players truly expressing its deep inward joy. Simply gorgeous. Lauridsen's jazz-based 'Fanfare for Brass Sextet', however, makes a fine contrast - wittily sarcastic and tart.

Bruce Broughton's 'Fanfares, Marches, Hymns & Finale (2002) is effectively a four-movement symphony for brass. It has plenty of variety, but for me it is at times rather short in distinctive material, particularly in the final movement, which outlived its stay somewhat. Nevertheless, it has some excellent challenges for the players, and some beautiful effects for distant muted instruments, which sometimes sounded like human voices.

'Elegy for Brass' (2009) by Ken Puts is affecting and pleasing rather than probing the depths of grief. The memories of Dr Stanton Schwartz, a supporter of the California Symphony Orchestra sound somewhat faded but nonetheless sincere. The last item of the programme is 'Spirals', a cheerfully syncopated dance-like piece by Scott Hiltzik, which was for me rather let down by some hand-clapping at various points. This just sounded out of place and feeble, considering the sharp precision of the brass playing - a flap-stick or wooden blocks would have produced a better rhythmic sound.

And sound is what this disc is really about. Its dynamic range is huge, and so is the frequency range. In the first track, one immediately draws breath over the fantastic energy of the high frequencies coming from glittering percussion and trumpet overtones, not to mention the tuba and big bass drum as an LF complement. One can play this clean capture at high volume (if your neighbours are out) with demonstration-worthy effect - but beware, if the HF response of your speakers is not smooth, it could sound like breaking glass. One of the finest recordings issued from Harmonia Mundi USA, whose engineers should certainly be proud of themselves.

Although there are perhaps a few weaknesses in the programme, I can't take any marks away; the performances are impeccable and the sonics just wonderful. This disc certainly rang my bells; I hope it rings yours too.