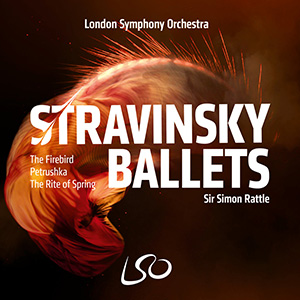 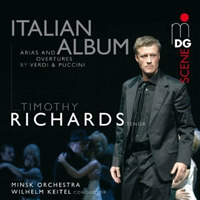 
Heroic Tenor
For ten years now a youthful heroic tenor from Wales has enchanted the European opera public, currently at the Comic Opera in Berlin and at the Semper Opera in Dresden, with his velvety soft voice soaring up to unprecedented heights. Timothy Richards has now recorded the most beautiful arias from his Italian repertoire on his first solo SACD. He is joined by the young Minsk Orchestra performing under its conductor and founder Wilhelm Keitel.

New Field
Timothy Richards began his professional career as a rugby player. Already during his early childhood he had shown talent for song and stage performance, and so his wish to become an opera singer gained the upper hand. In 1994 he received two scholarships to study voice at the Royal Northern College of Music in Manchester, where he won the Towyn Roberts National Competition, astonishing the public with a spectacular D flat in Rossini’s Stabat mater.

Italian Repertoire
Timothy Richards made his acclaimed opera debut as Alfredo in La Traviata at the Welsh National Opera, and the singer has remained true to the major roles in Giuseppe Verdi and Giacomo Puccini. Here he has distinguished himself as the Duke (Rigoletto), Riccardo (Un ballo in maschera), and Rodolfo (La bohème) and of course as Cavaradossi (Tosca). The Welsh singer is convincing as a vocalist – and more: the multichannel recording also suggests an impressive stage presence and an extremely dynamic and strong presentation of the roles.

Orchestral Color
The Minsk Orchestra and its German principal conductor profit from the artistic perfection of Verdi and Puccini. While the strings and winds merely offered an underlay with the appropriate harmonies in arias of the eighteenth century, progress in compositional technique later enabled them to supply entirely new tones colors, in order to heighten and intensify the atmosphere of an opera scene. The Minsk Orchestra is sovereign in its mastery of this task. The prelude to Macbeth is also worth hearing and in no way takes the backseat.

There is an album of worth itching to break out of its shackles here but this is not it.

Sadly for Timothy Richards and the Minsk Orchestra, the direction of Wilhelm Keitel must be some of the least inspired that has been heard on this medium. To make the overture to La Forza del Destino sound so bland is a crime against art music - why did all the expression need to be ironed out? When one hears and feels more from a pre-war Toscanini performance, something is seriously amiss. The small size of the Minsk Orchestra is not helpful but that does not excuse what Keitel obtains from the ensemble.

Against such tedium, Richards tries his best but struggles in vain for his accompanying band to follow his lead and so such arias as "Nessun dorma" fail to take flight. This album is clearly aimed at the followers of Richards and probably some impulse buyers impressed by the sultry photograph together with the obligatory Turandot aria. Such buyers will be disappointed as no texts are provided and nor is any information (beyond a general discussion of singing styles in C19 Italy) about the music.

The sound more than adequately reflects the performances here but give me Arturo any day...

Not recommended in any way shape or form (there are cheaper ways to get a coaster).