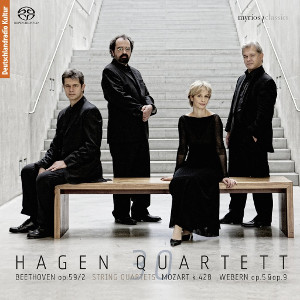 
The Hagen Quartett – unchallenged at the head of the international string quartet elite for thirty years – captivates its listeners again and again. Five years have passed since the end of the exclusive contract with Deutsche Grammophon in 2006 and now the quartet presents its first recording with myrios classics. The anniversary album Hagen Quartet 30 was produced in the historic Siemens Villa in Berlin and contains works by Beethoven, Mozart and Webern – three composers of central importance for the ensemble.

A wonderful recital from a highly regarded quartet.

As part of an answer in the interview contained in the booklet, the following summarises the Hagen's approach to playing music from the Classical era: "Paradox (sic) though it may seem, looking back in time leads to a more modern result when one processes this as an experience." One couldn't agree more nor better summarize why looking back helps one look forward.

This can be heard throughout the opening Beethoven quartet, from the dramatically attacked first chord and more focussed tone to the varying amounts of vibrato employed in every movement so that it too becomes the ornament that texts of the time describe. Some quintessentially "modern" features remain part of their playing style, most noticeably the prominent (but not as much as one might hear in a Mahler symphony) portamento that are employed in melodic and accompanying figures alike. Tempo choices are conventional - neither daringly fast (except for the Scherzo) nor slow but their dynamic range is far wider than usual from modern instrument ensembles in this repertoire to thrilling and dramatic effect. An exceptional account.

The Mozart, one of his "10 great quartets", is given a similarly dedicated and intense account (although by the very nature of the work, necessarily toned down a few notches from the Beethoven!) that is thoroughly modern in (parts) a HIP way. The Webern, although radically different in respect of the compositional language, is treated in exactly the same way as the Beethoven (allowing the very different demands made on the players). In short - this is a fabulous disc.

The sound, recorded in the Siemens-Villa Berlin, is extraordinarily life-like; one feels that they are really in the room and that one could reach out and touch the instruments/players.

Fantastic - easily the finest quartet recital on SACD in every respect.