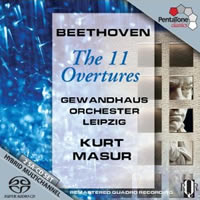 A welcome to SACD format for highly recommendable accounts of some of Beethoven's greatest orchestral writing, even if the sound is not ideal.

Surprisingly, for the amount of Beethoven release on SACD and their popularity, less than half these works have been issued in modern recordings: Coriolan, Egmont, Leonore's 2 & 3 and Prometheus. So this set is an essential purchase for those wanting, amongst others, Fidelio. Unlike some recordings from this era (the set was set down in a number of sessions between December 1972 and January 1974), Masur can not be accused of playing up the pastoral element too much at the expense of the revolutionary power inherent in these works.

As this is Beethoven pre-widespread adoption of HIP in almost any genre, it is not surprising to have a large string section, nor the use of softer timpani sticks than we would normally hear in this music (the most obvious comparison of approach for size of ensemble would be Haitink's LSO Live account of Leonore No.2 - the hard sticks really make for much more dramatic impact there). Nor is the seating of the violins antiphonal (as is well on the way to becoming a universal arrangement in music of this era) which robs some passages of interchange of their full impact despite the eloquent advocacy of the Gewandhausorchester Leipzig. Indeed much of their playing is surprisingly modern - pace what is noted earlier - and ardent HIP fans as well as traditionalists will revel in the music making. Despite a lack of raw power (particularly from the timpani and double basses), there is a drive in the performances that sweeps all before it that might cause many listeners to find themselves unwittingly "conducting" along!

The music is intelligently gathered on the two discs, with all the Fidelio related output comprising the first disc and the remaining overtures placed on the second. The actual sound is one of the less good RQR issues that have been re-released to date - mainly, if not entirely, because the overall reverberation time is excessive, the sound is not as detailed as one might expect now (it is possibly also related to the number of strings employed - ensemble is necessarily slacker and has less prominent woodwinds than modern accounts). For those who listen in MCH and were curious, the off-stage trumpet calls in the Leonore's still come from in front; the surrounds are for ambience only.

Recommendable overall, especially as Masur treats the lesser known works with the same respect, care and power as their more famous compatriots.

This Beethoven set was a delightful surprise, mostly. Unfortunately the recording (in MCH) was a little bit of harsh side. But the performances were excellent and the analytic booklet notes were a plus, too. Recommended Christmas gift for Beethoven fans and Masur/Gewandhaus admirers.

The remastering might be open to some criticism (see above); however, if you compare this Pentatone release with the RBCD version you'll be glad you purchased the SACD. The RBCD (which in 2019 is still being sold under the Philips label) contains a remastering done in the early 90's. I'm sure it was good back then. But the SACD offers a lot more detail, depth and oomph. And if you're only set up for stereo, as I am, you won't be bothered by any of the shortcomings the multi-channel mix might have. Recommended. 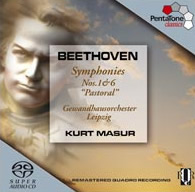 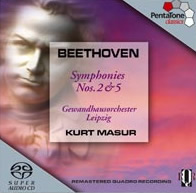 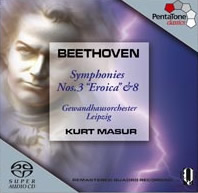 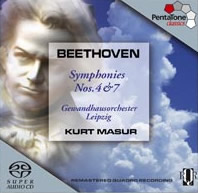 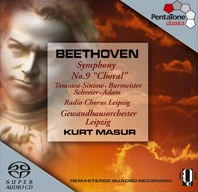 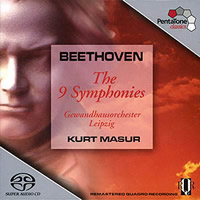