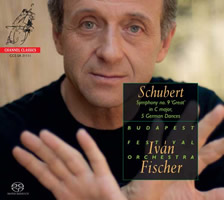 
A new dimension is added to the marvellous transition from the simple horn melody to a symphony when it is played on natural horns. Why did Schubert choose horns? Three notes sound open, the next stopped, the next stopped in a different way, like a melody roughly hewn from marble. Only when the oboe takes over is the unevenness polished away, removing limitations and barriers and transporting us into a magical realm of eternity. I must say that I find this transition most touching if the natural horn players do their best to equalize, to overcome their natural unevenness – like handicapped athletes do.

Small C-clarinets and narrow trombones give this symphony a special colour. The woodwinds have a leading role, playing all the Viennese songs, serenades, popular tunes and dances. Even if it is an orchestral work, here and there it feels like the seventh volume of Schubert’s Lieder.

When discussing any performance by Ivan Fischer and his wonderful Budapest Festival Orchestra the word ‘routine’ will never be used. All of Fischer’s recorded performances stem from his deeply considered view of the music in question, and are soundly based on the experiences he has amassed in the concert hall. The result is a very personal interpretative stance that might occasionally be controversial and sometimes idiosyncratic, but is never less than riveting for the listener at home.

For his new recording of Schubert’s Symphony No. 9 in C major ‘The Great’, Fischer has given more than just a nod to period performance practice. Though the normal sized Budapest Festival Orchestra play on modern instruments, Fischer has chosen to use natural horns, small C-clarinets and narrow bore trombones. These instruments both contrast and coalesce with the full strings (using vibrato) to produce an altogether distinctive and entrancing sound on this recording while, thanks to the orchestral lay-out (antiphonal violins etc.), one’s ear is quickly drawn to details that are often lost on rival versions of this work.

After the slow introduction Fischer launches the main allegro at a brisk but not inordinately fast tempo. As usual with this orchestra, one marvels at both the unanimity of their playing and the wide- ranging dynamics that the conductor achieves during the course of this opening movement right through to unparalleled grandeur of the coda.

The ‘Andante con moto’ that follows is again beautifully paced with the rustic sound of the BFO’s principal oboe being especially ingratiating to the ear, but, to be fair, all the woodwind solos are exquisitely phrased while the brass produce an appropriate rasping stridency when called upon to do so. A good example of this occurs in the movement’s climactic build up (from 8.52 to 9.30), where the fierceness of the brass on this recording makes for a greater contrast than usual with the tranquillity and repose of the lovely string passage that immediately follows their outburst.

Fischer’s weighty account of the scherzo is characterised by much charm and an appealing spring in its step. In the lilting trio section of this movement he gives the music an almost Brahmsian feel that seems most appropriate, while the finale has a forward thrust and urgency that belies the reputation that this work once had for excessive length and repetitiveness. The sheer energy and precision of the orchestral playing carry the listener all the way to the triumphant end of this most exhilarating performance.

Schubert’s ‘Five German Dances and Seven Trios with Coda’ (D89) composed by the 16 year-old composer make a perfect makeweight for the symphony. The strings of the BFO are in their element here, and they play these unpretentious dances, that include some delicious solos, with all the affection that one could wish for.

The familiarity of the recording engineers (Hein Dekker and Jared Sacks) with the fine acoustic of the Palace of Arts, Budapest has produced an exceptionally crisp and clean sound on this 5.0 DSD recording. Balances are exemplary and the overall sound has both warmth and presence.

Even on SACD there is no shortage of recommendable versions of this wonderful symphony, but Fischer’s fresh and bracing account should be at the top of anyone’s short-list. On both technical and musical grounds this is a recording that will be difficult for others to match let alone surpass.