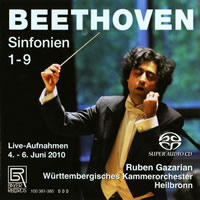 An exasperating set in almost every respect.

Recorded in celebration of the 50th anniversary of the Württembergisches Kammerorchester Heilbronn over the course of 3 days and 6 concerts (sometimes only 40 or so minutes apart). As the booklet (German only) makes clear, these are single, unedited records of these concerts with applause greeting the end of each symphony (rather brutally cut short instead of a graceful fading out).

As the name of the orchestra suggests, this is a small scale account texturally, yet Ruben Gazarian seems intent on pacing in a similar way to the past titans of the conducting scene albeit without the rubato that many were fond of in the pre-HIP era. Vibrato is almost always in evidence and every symphony loses both clarity and a great deal of the musical argument by seating the two violin sections adjacent to one another instead of opposite one another which the scores cry out for (the Finale of the seventh symphony for example is rendered largely impotent by ignoring such an obvious device by comparison with those that do observe Beethoven's clear intentions).

Sadly what is desperately missing is any sense of the longer line or indeed any form of musical personality whatsoever from the podium. The orchestra clearly do their masters bidding as well as they can but a deviant timpanist aside, there are few audible clues as to whether the players recognise the greatness of the music. Given the circumstances of the recording, it is inevitable that there are some rough edges of both execution and intonation but these are mercifully few and the audience is to be commended for its attentive listening. The chorus and vocal soloists are equally adept and free from slips.

The sound (in MCH) is far from state of the art; for some reason Bayer eschewed the standard 5(.1) configuration for 4.0 and the level of detail resulting is lesser for that decision. That said, it is a far cry from some "swimming pool" acoustics dealt out elsewhere and there is no discernable "hole in the middle" either so it's not a disaster by any means.

If one wanted (although it would be very difficult to fathom why anyone would) a set of "easy listening" Beethoven that would rudely awaken whatever trance had taken hold by the end of the symphony with a short dose of applause, this is the answer.

If one wants a more life-affirming, stimulating set of the Beethoven symphonies, one cannot go wrong with either Haitink, Jarvi or Vanska (for "titanic" large orchestra, HIP chamber orchestra, HIP large orchestra respectively - all use the latest Del Mar editions & all are superb accounts although the LSO Live sound is, well, a far too realistic recreation of the Barbican to be demonstration quality!) Depending on the mood, any movement in isolation from any one of those 3 conductors crams in more emotional punch and gravitas than this entire cycle.