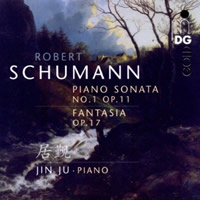 
Cryptic Message
Jin Ju’s debut album on MDG features imaginative and impassioned interpretation and a very personal and profound vision of the Sonata in F sharp minor op. 11 and the Fantasy op. 17. Drawing on the superb resources of the Steinway concert grand piano, she presents the emotionally subtle and powerfully energetic musical kaleidoscope of Schumann’s cryptic declarations of love to his future wife.

Secret Code
Op. 11 functioned as a billet-doux from Robert to Clara. He composed it during 1833-35, while regularly frequenting the Wieck home. After Friedrich Wieck at the beginning of 1836 had strictly forbidden the lovers from seeing each other, Robert’s only chance was to encode his messages of love in music. The pianist Clara responded in musical fashion: she performed op. 11 in public in Leipzig on 13 August 1837, thus indirectly accepting Robert’s marriage proposal.

Fond Absence
Schumann originally composed his Fantasy op. 17 as a classical piano sonata for the dedication of a monument to Beethoven in Bonn. Beethoven’s song “An die ferne Geliebte” was indeed fitting for this occasion, but later Schumann indicated that the work ultimately published as a fantasy had actually been yet another love letter. “You’ll understand the fantasy only if you go back to the unhappy summer of 1836, when I was denied you,” he wrote to Clara, who contributed significantly to the work’s dissemination in her concerts during the years following her husband’s death.

Prominent Audience
Jin Ju was known as an exceptional keyboard talent even prior to her performance for Pope Benedict XVI and his five thousand guests was broadcast worldwide. On this occasion this pianist born in Shanghai presented a recital on seven historical instruments from the eighteenth to twentieth centuries. Jin Ju lives in Florence, holds a professorship at the Imola International Music Academy, is a faculty member at the Peking Conservatory, and teaches at Manchester Royal College.

An obvious pairing of two wonderful works of Schumann.

From all the Fantasia's I've heard on SACD to date (Auf Flügeln des Gesangs - Tanski, Schumann, Liszt - Pedro Burmester, Schumann: Piano Works - Nicolas Bringuier), this version is easily accorded the finest sound and technical mastery of the score. Jin Ju is not short of poetry either and this is easily the finest musical account of the quartet. Her reading is fresh with plenty of character but some will find the overall pace a little slow that occasionally is in danger of lacking momentum and undermining the musical dialogue and feels a little "safe" in conception; unsurprisingly the finale pages come off best in such an approach although there is less contrasted emotional drama preceding that diminishes the feeling of release that the tranquil ending can engender.

A similar story emerges for the sonata; compared to the classic account of Gilels (now a BBC Legends release that is worth every penny, even though it is fairly poor sound) there is a lack of momentum caused largely by Jin Ju concentrating too much on detail rather the longer line. The speeds are not slow though in any way (except when Schumann calls for it) - rather, it is more about the phrasing choices. A great shame really, for when the final coda reaches its climax the effect is not the tumult of piano arpeggiated chords that it can be when the details are placed inside a larger framework.

The sound is one of MDG's best representations of the piano and cannot be too highly praised for every detail of pedalling and tone is admirably purveyed.