I have been accumulating MC SACD layers as .dsf files. I was just curious if there was any advantage to ISO

That's very helpful information for me, Mark, thank you. Now, it makes perfect sense with my observations mentioned above.

Pithecanthropus Erectus, the first album Charles Mingus recorded for the Atlantic Records label, marked a shift in direction away from the European-influenced music he’d explored in the previous decade towards a more earthy and soulful sound.

The album was recorded in a single session at Audio-Visual Studios, NYC, on January 30, 1956. The rhythm section of Mingus, Mal Waldron on piano and Willie Jones on drums, appeared on the Debut album Mingus at the Bohemia, which documented sketches of most of the material on PE. When the band entered the studio in January, tenor saxophonist J.R. Monterose and a rising young alto player, Jackie McLean, joined the three rhythm players.

This quintet was a smaller ensemble than Mingus would have employed, if time and budget had permitted. The absence of a trumpet and trombone scaled down the arrangements and limited the range of his Ellington-inspired tonal palette. As if to compensate, Mingus furiously drives the band to dynamic levels that the session engineers might not have expected.

In spite of the recording’s sonic limitations, the brilliant compositions and inspired soloing by Waldron, Monterose and McLean shine through. Waldron’s symphonic piano voicings, Monterose’s languid swinging, and McLean’s assertive hard-bop inventions bring out the resurgent soulfulness that Mingus had expunged from his earlier Jazz Composers Workshop recordings. Willie Jones, who would soon be replaced by Dannie Richmond in the Mingus band, keeps a steady beat and contributes subtle touches on cymbals, but remains in the background.

Recording engineers Hal Lustig and Tom Dowd undoubtedly did their best to capture the energy and scale of the performances, but the quality of Audio-Visual Studios’ mics and board, and perhaps also the physical layout of the soundstage worked against them. Compared to Mingus’ sessions for Bethlehem and Atlantic in the following year, PE sounds murky, imbalanced, with occasional overloading on crescendo passages. George Piros remastered the album for the Atlantic Jazzlore LP series in 1981, an improvement over an earlier Atlantic LP reissue. Atlantic Masters (Europe) issued a digipak CD with the original cover art, remastered in Switzerland. Sadly, it was normalized and probably EQ’d—an unpleasant listening experience.

While I’ve heard only a few of the many reissues, I can report that the 2011 Warner-Atlantic Japan SHM-SACD has better sound quality than expected, and is the one digital version I would recommend. For those audiophiles who prefer analogue, the Speakers Corner 180-gram LP, remastered at Cohearant Sound by Kevin Gray, would be a first choice.

Mingus revisited the composition Pithecanthropus Erectus in 1970, in a studio session recorded in Paris, and in a well-recorded live performance in February 1973, recently released on Jazz in Detroit / Strata Concert Gallery / 46 Selden, which can be auditioned and downloaded on Bandcamp.

The original January 1956 session stands as a declaration of the composer’s faith, in the teeth of evidence to the contrary, that humankind could still evolve towards a state of genuine humanity. 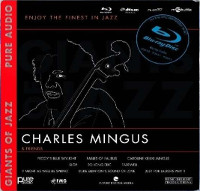