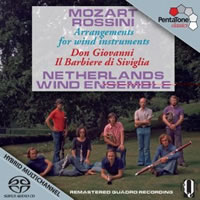 An entrancing disc of wind ensemble playing in a vintage recording that truly deserves its reissue.

The excerpts of Don Giovanni includes the Overture, "La ci darem la mano" and truncated finales and much more besides that adds up to a delightful 39 minutes of music, arranged by J. G. Triebensee (a son of a Imperial Wind Band member) that is roughly contemporaneous to Mozart's lifetime. Although there are some necessary alterations (and some stylistic quirks that don't ring true to modern ears) this is remarkably faithful to both the spirit and letter of Mozart's great score; at almost no time does one miss singers or orchestra despite only hearing a pair each of oboes, clarinets, bassoons and horns (and a solitary double bass). The Rossini is similarly well crafted both in terms of the arrangement and the selection of material - most favourites can be heard in this arrangement by W. Sedlak for pairs of oboes, clarinets, bassoons, horns and trumpets (and a contra bassoon).

In both cases, the Netherlands Wind Ensemble are musical to the core and leave the listener wanting little in the way of voices or orchestras. Just occasionally, one suspects that with a conductor, some more daring and exciting tempo choices might have occurred but they are never boring.

The transfer of the Quad recording is astonishing - it could have been made yesterday such is the lack of tape hiss. The less said about the accompanying artwork though, the better!