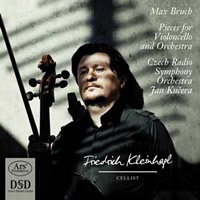 Poor Max Bruch; not only an un-reconstructable late Romantic, his G minor Violin Concerto, penned at the age of 25, became such a success that it overshadowed most of his other life works, leading to deep depression. He was vitriolic towards other more progressive colleagues, whom he saw departing the holy stream of (folk) melody - especially Wagnerites, Richard Strauss or those of the Second Vienna School such as Schoenberg and Webern. Strauss, particularly, fell victim to a stream of intemperate invective, Bruch holding that he "has made the Berlin Philharmony a great artistic pigsty".

Despite difficulties in obtaining performances of new works, Bruch had a hundred or so behind him at his death in 1920, only a few of which manage to creep into modern concert programmes or recordings, apart from "the" Violin Concerto", of course. Amongst these is Kol Nidrei Op. 47, for cello and orchestra. Every good cellist seeks to perform this, even as an encore, and there are no shortage of recordings by top performers. Subtitled "Adagio with Hebrew melodies" this was begun in Berlin and completed in 1880 when Bruch was Director of the Liverpool Philharmonic Society. It consists of two very old melodies; a Hebrew song of atonement and the middle movement of the song "Oh Weep for those that Wept on Babell's Stream". He worked with his friend Hausman, who was cellist in the famous Joachim Quartet, on developing an idiomatic solo line. Incidentally, this piece led to the wide-spread and still current legend that the Protestant Bruch was in fact Jewish!

Several other adagio-type pieces for cello and orchestra (or piano) are appropriately collected here: Canzone Op 55, also dedicated to Hausman), Adagio on Celtic Melodies, Op. 56 (with Scottish and Irish tunes), Romance for cello and orchestra Op. 85 (originally for viola, transcription by Kleinhapl) and Ave Maria Op. 61, after motifs from a Cantata of Bruch's. They are all emotional, full of curving cantilenas, and even linked by Bruchian fingerprints like an arpeggio run up to the starting note of important phrases.

Listeners will quickly hear that the cello sound as engineered is from a rather close viewpoint; in fact one would have to be sitting in the first row, just forward of Kleinhapl's feet. Some may think that this is too intimate, but there are few extraneous noises and the burnished sound, particularly in the lower reaches is gloriously sonorous, and an experience in itself. But caveat for those who prefer not to embrace the cello so much.

As a generous filler, Ars include Bruch's Suite for Large Orchestra with Russian melodies Op. 79b. Written after Bruch's Suite of Swedish dances, this makes a terrific concert item: the dances are as good as many of those by Brahms and Dvorak, and they are sumptuously orchestrated. The CRSO players are excellent here, seemingly delighted to dispense with accompanying duties and show off their prowess. The enlarged orchestra includes a double-bassoon, piccolo and a very satisfying big bass drum. Comparing Ku&#269;era's performance with those on RBCD by Honeck (Naxos) and Adam (CPO), the Czechs win hands down for stylish characterisation and sheer fun. The last movement is a wonderfully impish speeded-up version of 'The Volga Boatman'. Ars recording engineers, still in the Domovinia Studio, Prague, open up the gentle ambience of the cello pieces into a larger acoustic to fit the big orchestra, producing a clearly focussed and detailed capture, best heard in the 5.1 multichannel mode, quite a thrilling sound.

There are well-presented notes: Kleinhapl writes interestingly about his personal take on Bruch the man as well as his cello music; there is also plenty of detailed contextual material for each work in German and English for the listener's guidance.

If you can stomach a rich diet of romantic Bruch with wonderful cello sound and playing, topped off by a brilliantly presented desert of Russian spices, then this disc is for you.