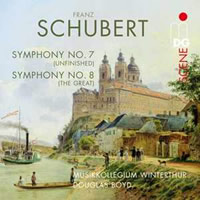 
Symphonic Staging
With this SACD the Musikkollegium Winterthur under its conductor Douglas Boyd brings after the recent release of Franz Schubert’s incidental music to Rosamunde his last symphonic works.

Earthly Toil
Beethoven was for Schubert the master of all musical things. His aim was not only to equal his model but also to develop his own individual style, and it was not easy for him to achieve this goal. He wrote his first five symphonies with youthful carefreeness, but in the sixth he found the tension between musical imagination and formal compositional norms already so oppressive that for a time he was able to commit nothing but fragments to paper. It was not until the late autumn of 1822 that he succeeded in producing two symphonic movements that he let stand as signposts along the way to his own goal: he sent the “Unfinished Symphony” to the Graz Music Society because it had named him its honorary member.

Heavenly Splendor
The “grand” Symphony in C major by Franz Schubert bears the official date of 1828. After its premiere in 1839 Robert Schumann had the highest words of praise for it: “These are human voices, all the instruments are brilliant beyond measure – and then this heavenly length.” He thus supplied posterity with the key terms that continue to be used today to describe Schubert’s symphonic music.

Tremendous Tradition
The Musikkollegium has been active in Winterthur since 1629 – which makes this orchestra one of Europe’s most richly traditional musical institutions. Today the orchestra presents approximately seventy concerts per season, some forty of which are held in Winterthur in its own concert series in the Winterthur Stadthaus built by Gottfried Semper. The ensemble also increasingly performs in leading concert series in foreign countries. It draws on a membership of fifty musicians and thus is able to focus its repertoire on works of the classical and early romantic periods as well as on music of the twentieth and twenty-first centuries. Douglas Boyd has been the principal conductor of the Musikkollegium Winterthur since 2009.

Another lovely Schubert disc from the same forces that gave us Schubert: Incidental Music to Rosamunde - Boyd.

In the "Unfinished", Boyd's Allegro moderato very much tends to the moderate tempo in contrast to Dausgaard's ear-opening one-in-a-bar approach. The phrasing is also in line with the convention that the recording era has bequeathed us but is never stale nor wanting for freshness; in common with all conventionally paced accounts, the climaxes are a portent of Romanticism (arguably Bruckner's) rather than the storm of a raging Beethovenian Classicism. At no point does the smaller string ensemble lack anything in tone nor power in comparison to their woodwind and brass counterparts. The slow movement is also conventionally paced and phrased; once again the freshness that the Musikkollegium Winterthur bring to the score prevent the account being routine although those seeking HIP performances will undoubtedly feel that Romanticism is too prominent for their tastes. Those who thrill to Dausgaard's extraordinary account may also be disappointed in the (relative) lack of electricity but this is easily the safest modern recommendation for this wonderful torso.

In the "Great" symphony, this account is a clear first choice for a chamber orchestra-sized approach, although one would not be able to recommend this absolutely before one has sampled the delights that Ivan Fischer and his BFO offer (a wonderful account in almost every respect). Somewhat unusually, the opening introduction is given a separate track - here (and in the rest of the symphony) the decision of Boyd to place the violins either side of the podium is vindicated and pays enormous dividends for the listener in aiding the clarity of dialogue within the strings and - at quicker stretches of the canvas - the excitement generated naturally by the score. Just as in the "Unfinished", wonderful playing is on display from all sections; a special mention must be made of the hard sticks the timpanist uses for these really provide a drive to the music that is reminiscent of Beethoven's seventh symphony. As with all of Boyd's Schubert, the music making has that magical, restrained naturalness that so many strive for (and don't always succeed in attaining) which is particularly evident in the handling of the first movement's coda - very well done, it neither dashes away or drags to a halt.

The slow movement is distinguished by the contributions by the woodwind (dare one say, the oboes) who are most tenderly and musically supported by the strings in both their detached and smooth figurations. The tension is admirably built to the central climax, with the careful balancing of the myriad of motifs combining in a forceful crescendo. Unlike in all too many performances, the following melodies do not sound remotely out of place and these flow at just the right pace to the (again, Beethovian) coda. Unlike his former "master", Boyd eschews the repeats of the Scherzo on their repetition following the Trio (similarly, the repeat in the Finale is also ignored). This spirited reading is full of life and wit from all concerned - the offbeat accents jump out in a way that would have made Haydn proud. The Trio is one of the crowning glories of everything Schubert wrote and the players respond as though it was the most beautiful music they had ever set eyes upon and play it in an utterly natural, unmannered way - truly delightful and almost worth the price of the disc alone. The finale is taken quickly but not so quickly that the quicksilver figurations handed to the upper instruments are unintelligible (no mean feat!) As with all of the rest of the disc, the phrasing is faultless (if not a little "mainstream"), as is the standard of playing. A worthy and contrasting companion to Fischer's large-scale account in every way.

The recording is one of MDG's very best - everything just snaps into place, the acoustic is perfect (both in terms of size and resonance) and the instrumental timbre couldn't be more truthful. 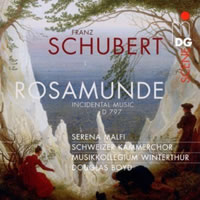