This is a great recording of a great work by Kleiberg. It's wonderful in surround. This is my first experience with any Kleiberg works. SACD is a Hybrid, with MQA-encoded ... 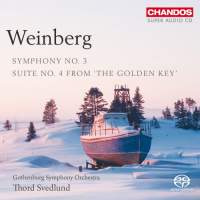 
The Gothenburg Symphony Orchestra conducted by Thord Svedlund is back with a new recording in Chandos’ ongoing series devoted to orchestral works by Weinberg. This is proving a benchmark series, one that has contributed significantly to Weinberg’s reappraisal in recent years. International Record Review described the CD of concertos by Weinberg (CHAN 5064) as ‘one of the most sheerly exciting discs to come my way in a long time… a release of first importance’.

Born in Poland into a Jewish family, Mieczyslaw Weinberg fled before the German invasion in 1939 and spent most of his working life in the Soviet Union where he was a friend and neighbour of Shostakovich who did much to champion his music. He composed his Third Symphony between 1949 and 1950, shortly after the launch of Andrey Zhdanov’s ‘anti-formalism’ campaign which exhorted all Soviet composers to produce music for the People, i.e. in a broadly comprehensible language, preferably drawing on folk material. Weinberg obliged by placing a Belorussian folksong (‘What a Moon’) as a contrasting theme in the first movement, and a mazurka-like Polish folksong (‘Matek has died’) at the corresponding point in the second; the latter then transformed to produce the main theme of the finale.

This nod in the direction of official recommendations still was not enough to ensure a performance of the symphony. The premiere which had been scheduled to take place in Moscow was postponed. Later Weinberg was said to have discovered a number of ‘errors’ during rehearsals and therefore made the decision to cancel the performance. Perhaps this was simply an attempt to cover up official pressure to withdraw the work, perhaps not. In any case, Weinberg revisited the material ten years later, and the revised version was first heard in 1960 in the Great Hall of the Conservatory in Moscow, performed by the All-Union Radio and Television Symphony Orchestra conducted by Alexander Gauk.

Weinberg composed the ballet The Golden Key in 1954 – 55 on a popular tale by Aleksey Tolstoy, which mixes elements of the story of Pinocchio with that of Petrushka, hinting too at Jack and the Beanstalk. The music itself can be heard as a gallery of the great Russian masters of orchestration, Weinberg taking us on a journey of Tchaikovskian waltzes, Rimskian brass works, flashes of Stravinsky’s Petrushka in the winds and in some of the dance rhythms, and gorgeous adagios of the sort Prokofiev’s Romeo and Juliet taught Russian composers how to write.

This release is the latest in the Chandos survey of the music of Mieczyslaw Weinberg and like the previous two, Weinberg: Symphonies 1 & 7 - Svedlund and Weinberg: Concertos - Svedlund, the performances are entrusted to the fine Gothenburg Symphony Orchestra under Thord Svedlund with predictably excellent results.

Both the Symphony No. 3 Op.45 and the Suite No. 4 from 'The Golden Key' Op. 55D are among the most immediately attractive music from this composer that I have heard. They are packed full of engaging melodies, are brilliantly orchestrated and delivered to the listener in demonstration quality sound on this recording.

Weinberg's Symphony No. 3 was composed in 1949-1950 during the final years of Stalin's rule and later revised in 1959. This was the period in which Anti-Semitism became official policy in the USSR and composers like Weinberg and Shostakovich were under attack from the 'anti-formalist campaigns led by Zhadnov and Khrennikov. In spite of such constraints, Weinberg has used them to his advantage through his use of imaginatively orchestrated folk song material.

The symphony opens with an appealing flute theme that is then taken up by the strings. The mood is carefree, almost pastoral, and sounds closer to Sibelius than anything by Weinberg's friend Shostakovich. The music progresses in a largely untroubled mood before more martial sounding music intervenes (splendid brass playing from the Gothenburgers). Eventually, after recapitulation of the main themes, the movement ends quietly with a strange, almost icy, coda.

The brief scherzo is cheerful and bouncy with many opportunities provided for all sections of the orchestra to show their mettle in the solos, which they certainly do. The playing is absolutely thrilling; superbly articulated and rhythmically taut.

The slow movement begins with a haunting and melancholy folk-inspired theme on the strings. The mood is darker than in the previous movements and it builds to a searing climax before returning to calmer waters for its hushed final bars.

Heroic trumpets begin the finale, an energetic 'Allegro vivace' driven forward with much use of percussion. It is interrupted from time to time with sardonic sounding waltzes (one of the few passages in this work that Shostakovich is brought to mind) that hint at Weinberg's Jewish heritage. There is a tumultuous build up before the symphony ends with a triumphant percussive bang.

Why this inventive and exceptionally melodic symphony is not standard repertoire remains a mystery, but one can hope that this magnificent performance will lead to the exploration of even more Weinberg on SACD.

The scenario of 'The Golden Key' ballet sounds like a cross between 'Pinocchio' and 'Petrushka' and concerns the adventures of a puppet boy called Burattino. It was composed in 1954 with its original title 'The Adventures of Burattino' and received its première, after a title change and much revision, in 1962. Two years later Weinberg extracted four suites from the ballet. The fourth suite heard here is made up of seven short lively dances and a lovely elegy. The music is quite delightful and Thord Svedlund and his orchestra relish the wit and sparkle of the score. One's only regret is that on a disc lasting 49' 53” it was not possible to add one of the other three suites as well.

As indicated above the sound quality on this SACD is all one could ask for. Sound engineer Torbjörn Samuelsson has skilfully captured the orchestra in the clear and spacious acoustic of the Gothenburg Concert Hall. The sound has great presence and impact as well as a firm bass response as witnessed by the clarity and weight of the bass drum even in quiet passages.

This appears to be the first commercial recording of the third symphony of Mieczyslaw Weinberg (though this is not noted in Chandos’s booklet notes so take that with a grain of NaCl). Written in 1949 and revised ten years later, this four movement, 32 minute symphony in B minor reminds one much of Shostakovich who was a friend and mentor of Weinberg. Some of the melodic material is taken from folk sources (both Russian and Polish) which makes for some strong and interesting melodies. The orchestration is also interesting and effective. Having heard a handful of his other symphonies (there are 21 completed symphonies in all) I would say that No.3 is my favorite to date. The expressive and melancholy Adagio third movement is especially nice. It is good to hear this music performed by the great Gothenburg Symphony Orchestra under the sure baton of Thord Svedlund. I can only hope that Chandos will continue this survey with these forces. If you are drawn to the symphonies of Shostakovich, by all means check out this recording.

The filler, Suite No.4 from the ballet “The Golden Key”, Op.55d is much less interesting than the symphony. This 17 minute, multi-movement piece lacks the drama and seriousness of the symphony. Even with this filler, the total SACD timing is under 50 minutes. Chandos ought to have ditched the suite in favor of one of the other symphonies.

The sound is excellent in stereo. I’ve always liked the sound of this orchestra in their concert hall and this one is fully up to my lofty expectations. Lennart Dehn, a long-time producer of many Gothenberg recordings, produced this one which was engineered by Torbjorn Samuelsson. The orchestra sounds appropriately large with an excellent balance between direct and hall sound. Instrumental timbres are excellent and the orchestral foundation is present in good balance with a wide and deep soundstage. Brass and woodwinds sound especially realistic and the strings are never unnaturally harsh. We need more orchestral recordings of this caliber! 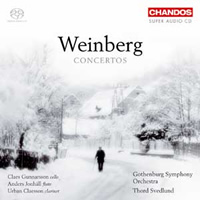 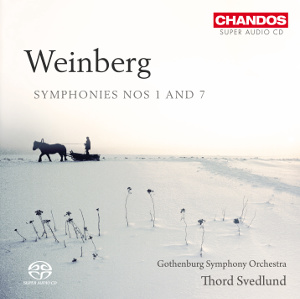 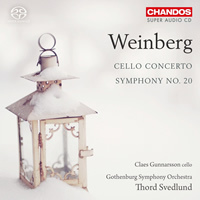 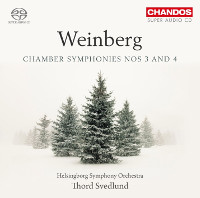