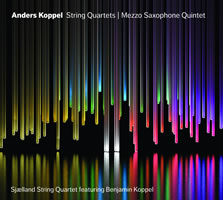 
The Danish composer Anders Koppel (b. 1947) has one foot firmly planted in the European classical music tradition, and the other in world music, rock and jazz. On this album the two worlds meet when the Sjælland String Quartet are joined by Koppel’s son, the jazz icon Benjamin Koppel. The composer has tailored his quintet to the distinctive mixture of the classical string quartet and the custom-built mezzo saxophone, which with this recording can be heard for the first time ever on CD.

The phrase "classical music for people who [insert your favorite pejorative verb] classical music" ran through my mind as I listened to this exemplary disc of contemporary—and very accessible—chamber music.

Much of the string quartet writing in the post-war era acquired a reputation—not always deserved—for abstruseness. Confronted by the mathematically rigorous and intellectually hermetic works of Boulez, Carter and Xenakis, lovers of Haydn and Beethoven could be forgiven for covering their ears in desperation.

Anders Koppel’s String Quartets Nos.1 and 2 (1997 and 2008) revel in the breadth of string sound repertoire, from the swooping glissandi and percussive pizzicato effects in Quartet No. 1, to the languorous legato passages in the Quartet No. 2. Threaded with tango rhythms and klezmer melodies, the two quartets wade but do not wallow in currents of the past. They are given first-rate performances by the Sjælland String Quartet, who regularly include contemporary music in their concert repertoire, and a close, detailed recording in the warm acoustic of the Royal Danish Academy of Music by Dacapo’s producer-engineer Preben Iwan.

The Quintet for Mezzo Saxophone (2008), the first major composition for this brand-new member of the saxophone family, veers closer into musical crossover territory. The three-movement work incorporates quasi-jazz improvisational-sounding passages, especially in the outer movements.

Benjamin Koppel, best known as a jazz musician but well-versed in academic tradition, demonstrates the pristine clarity of Peter Jessen’s new instrument. The sound of the mezzo-soprano G saxophone shares characteristics of the alto sax, alto flute and cor anglais, depending on the pitch and amplitude of the notes. The mezzo saxophone is well integrated into the quintet during much of the piece, bursting out periodically into flights of solo virtuosity. The slow second movement, inspired by Arnold Böcklin’s lugubrious iconic painting “The Isle of the Dead” (Die Toteninsel), provides ample space for first violin Anne Soø Iwan to trade poignant melodies with saxophonist Koppel, over a gentle barcarolle rhythm.

Lovers of chamber music: play this SACD for your small-ensemble-skeptical friends. You might just make a convert.