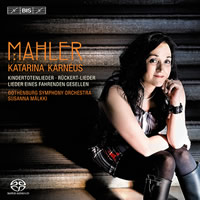 
As a composer, Gustav Mahler was absorbed by song and symphony as complementary genres deeply involved with each other. So deeply involved, in fact, that the dividing line between the two is often blurred – most famously so in Das Lied von der Erde from 1909, which is variously described both as a cycle of orchestral songs and as a symphony. But already in 1888, in his first symphony, Mahler included two themes from the song cycle Lieder eines fahrenden Gesellen, which he had recently composed to his own poems.

At the time this cycle only existed in a version for voice and piano; possibly it was the experience of orchestrating these themes in his symphony that a few years later inspired Mahler to create the version for voice and orchestra. If the Lieder… is a fairly early example of Mahler’s particular gift for merging text and voice with the symphonic medium, the two other cycles on this disc represent him at his zenith, around the time of his Fifth Symphony.

All of the songs in Kindertotenlieder and Rückert-Lieder are settings of poems by the poet Friedrich Rückert, composed between 1901 and 1904. For Kindertotenlieder (Songs of the death of children) Mahler chose five of more than four hundred poems written by Rückert in reaction to the death of his two children: poems of despair, disbelief and resignation. Only four years after the completion of the cycle, Mahler’s own daughter died, aged four. While Kindertotenlieder was conceived as a cycle, the Rückert-Lieder are more loosely connected with each other. They were originally composed for voice and piano, and the orchestral versions were published only after Mahler’s death. Nevertheless they include some of the most sublime Mahlerian moments, for instance in Ich bin der Welt abhanden gekommen.

Besides having a highly successful opera career, Katarina Karnéus is a regular guest with prestigious orchestras, and her appearances in works by Mahler have been particularly praised, for instance in The Guardian in regards to a performance of Symphony No.2: ‘Urlicht, heart-stoppingly sung by Katarina Karnéus, became the spiritual centre of the piece’. She is here supported by the acclaimed Gothenburg Symphony Orchestra conducted by the sought-after Finnish conductor Susanna Mälkki.

Since winning the BBC Cardiff Singer of the World Competition in 1995, Stockholm-born Katarina Karnéus' burgeoning international operatic and concert career is going from strength to strength. She has been awarded rapturous praise for her Mahler singing, and as a Swedish artist it is fitting that she should make this disc of Mahler's orchestral songs with the Gothenburg Symphony Orchestra. Just as fittingly, Susanna Mälkki, former co-principal cellist in the Gothenburg orchestra, returns to direct them as part of her own flourishing conducting career. The BIS production team too are very much on home ground with the orchestra and venue (the venerable Gothenburg Concert Hall). The synergy of all these creative artists is palpable, despite the disc comprising several sessions: (Wayfarer songs in 2007, Kindertotenlieder in Jan 2010 and Rückert Songs in Aug 2010). Credit goes to BIS for putting the sessions together virtually seamlessly.

The so-called "song-cycles" here were published by Mahler with unidentified 'Voice' parts, making them available to both male and female singers, although one could argue from their poetic contexts that they should be sung by men. However, the mostly low-lying vocal lines are also suitable for contraltos and mezzo-sopranos as well as baritones, and exceptional recordings have been made by both. My personal preference is definitely for the mezzos, and here we have some peerless exponents on record; Kathleen Ferrier/Bruno Walter, Janet Baker/John Barbirolli and Christa Ludwig/Herbert von Karajan - difficult acts to follow!

Katarina Karnéus evidently dearly loves these songs, and makes the most of them here with a superbly controlled and steady voice, its rich overtones allowing much subtle vocal colouration. Take the Lieder Eines Fahrenden Gesellen: she is able to float sweetly as an innocent nature-loving lass in "The morning I walked across the field" yet spring commandingly into "I have a searing hot knife" with a snarling chest-register and steel in her upper voice. In the Rückert Songs she gives her all, singing imposingly against a formidable brass chorus in the terrifying "At Midnight", yet later attaining the hushed, stark stillness of self-imposed exile in "I am Lost Unto the World".

Friedrich Rückert (1788-1886) was an influential poet who lost his only daughter to diptheria at the age of 3, and 16 days later his second youngest child, a son. In utter anguish, he penned 425 "Songs on the Deaths of Children". Mahler, gifted with being able to confront Death with his own art, must have felt compelled to express Rückert's anguish in music, being further attracted by the name of Rückert's son, Ernst (the name of Mahler's own little brother who had died in his arms). So he set 5 of the poems between 1901-04. Contrary to common belief, these songs had nothing to do with the death of his own daughter (which happened three years after the songs were completed); he was not even married when he began writing the Kindertotenlieder. Katarina Karnéus thankfully does not give way to over-ripe sentimentality with Mahler's radiant melodies, but invests them with pure, subtly shaded lines and excellent diction (which amplifies the effect of her word-colouring); she is ever the stoic mother. In the last song, she finally convinces herself, and us, that the children, having weathered a great storm are now in a peaceful haven.

In contrast to the fairly normal orchestration of the early Wayfarer songs, both Rückert sets have individually tailored orchestras for each song, pared down virtually to chamber music, anticipating the forthcoming style of Das Lied von der Erde. The Gothenburg players here excel in ensemble and fluency of expression. Soloists playing first horn, oboe and cor anglais in particular are magnificent, and should perhaps have been named in the booklet. The orchestra's rapport with Katarina Karnéus provides ravishing accompaniments, and the BIS engineers have produced sound of wonderful transparency and atmosphere. Solo instruments appear as if by magic around the singer, emerging from the black velvety Concert Hall ambience in a most atmospheric way. Near-perfect balancing places the singer in the same acoustic as the orchestra, without any obvious signs of spot-miking. Just listen to the orchestral postludes of each song; they are so deeply moving and eloquent.

This is simply a wonderful Mahler disc in every respect, self-recommending from the very first few bars.

This new recording, coupling Mahler’s three well-known song-cycles, can be confidently recommended to prospective purchasers without any reservations whatsoever.

First, the recorded sound is exceptional thanks in no small part to the superb acoustic of the Gothenburg Concert Hall and the skill of the engineers. The strings of the Gothenburg Symphony Orchestra are reproduced with a silky smoothness, and the many wind solos in each of the cycles stand out with perfect clarity from the surrounding instruments. The bass response is also very clean, and I have never heard the tuba part in ‘Um Mitternacht’ (Rückert Lieder) so clearly delineated as on this recording.

Secondly, the conducting of the young Finnish maestro Susanna Mälki is also quite outstanding. She captures, with unerring skill and a marvellous control of orchestral balance, the wide emotional range of the fourteen songs that together span twenty years of Mahler’s compositional life. Her judiciously chosen tempi always seem just right

Finally, the beautifully controlled and subtly nuanced singing of Katerina Karnéus makes each of the three cycles something special. She delivers the third song of the ‘Lieder eines fahrenden Gesellen’ with a terrifying intensity yet still never makes an ugly sound. It is inevitable that with so many competing versions on disc of these works, comparisons will be drawn with other interpretations. In the case of the ‘Rückert Lieder’, I confess to finding an even greater range of expression on the recent recording by Susan Graham Mahler: Songs with Orchestra - Graham/Hampson/Tilson Thomas, but taken as a whole this Karneus recording is not to be missed.