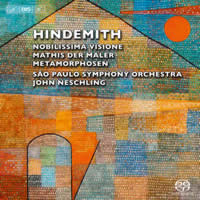 
The three orchestral scores gathered here are certainly among Paul Hindemith’s most well-loved works, and for good reason. If his style in the 1920’s at times had struck listeners as sparse and utilitarian, in Mathis der Maler (from 1934) the musical language became more dramatic and more lyrically approachable, as well as more concerned with colour and light. Possibly the subject of the symphony had something to do with this, composed as it was in parallel with the opera of the same name, inspired by the life and work of the Renaissance painter Matthias Grünewald. Conducted by Furtwängler, the symphony was a resounding success – but only months later the Nazi regime began to make Hindemith’s life difficult, for instance through an unofficial ban on radio broadcasts of his music.

Some years later the frescoes on the life of St Francis of Assisi by another Renaissance painter, Giotto, became the inspiration for Nobilissima Visione. This time the stage work had the prior existence, but Hindemith made a suite of the ballet score immediately after its triumphant first performance in London in 1938. Again there is a strong lyrical, at times elegiac, vein in the music, and as in Mathis, the historical setting offers the opportunity for allusions to music of earlier times, such as troubadour songs of the 13th century.

In the final work on this disc, the musical quotes are more overt – and less distant in time. In the Symphonic Metamorphosis – probably his most often performed orchestral work today – Hindemith uses themes by Carl Maria von Weber, but treats them entirely in his own mature manner, producing a largely good-humoured orchestral showpiece.

The various qualities in these scores are brought out with all the flair that we have become used to from the São Paulo Symphony Orchestra and John Neschling. The team's numerous recordings of Villa-Lobos have met with universal acclaim, and their recently released disc of music by Respighi was called 'the best Roman Trilogy of recent times' in Classic FM Magazine and 'an extraordinary experience' on the German website klassik.com.

This disc's programme consists of Hindemith's most popular symphonic works: 'Mathis der Maler' (1934), 'Nobilissima Visione' (1938) and 'Symphonic Metamorphoses on themes of Carl Maria von Weber' (1943). All of them were composed in his own particular interpretation of the Neoclassical Style then in vogue. Hindemith, however, favoured Bach as his model, unlike the Mozartian preferences of Stravinsky and other neoclassicists.

Mathis der Maler ("Mathis the Painter") is generally thought to have been compiled from Hindemith's opera of the same name, but as Malcolm MacDonald tells us in his insightful, very detailed and authoritative booklet note, the symphony came before the opera. Its inspiration was the life of the Renaissance painter Mathias Grünewald (whose real Christian name was 'Mathis'). The artist's supreme masterpiece is a set of paintings around the altar of the monastery at Isenheim in Alsace, and I would suggest that before listening to the music one might profitably look at these paintings on-line or from a book, as Hindemith's music is very picaresque.

The 'Mathis' symphony and opera fell foul of the Nazi Party's clampdown on "modernism" at the time, despite a notable public success, and Hindemith was vilified by the press. Nevertheless, he carried on in this new vein. Inspired once more by paintings, he fell under the spell in 1937 of seeing Giotto's frescoes representing the life of St Francis of Assisi. Collaborating with the choreographer Leonid Massine, 'Noblissima Visione, a Dance Legend' a ballet was premièred in London during the fateful year 1938, under the name "St Francis". A symphonic suite was extracted, reverting to the Noblissima Visione name. Once more it is valuable to view the paintings before listening to the music; Hindemith follows Giotto's portrayal of the chaos of Medieval life and its religious zeal in a most convincing way.

By 1940, Hindemith's position in Germany became untenable, and he emigrated to the United States, teaching mostly at Yale. Some existing ballet scores based on themes by Weber for Massine were dismissed by the choreographer, and eventually Hindemith produced the four movement orchestral piece 'Symphonic Metamorphosis on Themes by Carl Maria von Weber', completed in 1943. This and 'Noblissima Visione' are natural partners to the 'Mathis der Maler' symphony, and they all fit well together on a single CD.

In his later years, Hindemith became tired with what he saw as over-wrought, self-aggrandising interpretations of his orchestral music by recording artists. A fine and well-respected conductor himself, he set down his own recordings for posterity. Both DGG (with the BPO) and EMI (with the Philharmonia) had released re-mastered albums of these recordings, which remain the touchstone for interpreters of Hindemith's orchestral music. Neschling comes remarkably close to Hindemith in his present readings. His tempi are mostly within a few seconds of Hindemith's, but he is able to take advantage more of modern recording techniques by using a greater dynamic range, and generally he and his orchestra shape the melodic lines somewhat more expressively. The musicians and recording engineers fully exploit the composer's kaleidoscopic orchestrations with spectacular results.

Despite fierce competition in this repertoire from Karajan, Abbado and others, Neschling's superb realisations of Hindemith's scores - with the full cooperation of the São Paulo Symphony Orchestra - are amongst the best available. The playing is often spectacular, as is the pellucid sound captured by BIS. The generous ambience of the Sala São Paulo produces a very natural concert sound, with good front-back perspective and astonishing detail. The hushed opening of 'Mathis' might sound at first somewhat distanced, but avoid putting the volume too far up, because there are climaxes which nearly bring the house down. Potentially a real demonstration disc.

An unmissable addition to a music library, and a very good introduction to Hindemith for a neophyte's collection.

This collection represents three of Hindemith’s most beloved orchestral scores, their popularity evidenced by the number of recordings they have received over the years. There are currently 40 commercial recordings listed for the Symphonic Metamorphosis and 35 of Mathis der Maler while Nobillisima Visione clocks in with 18. As such, this recording by John Neschling and the Sao Paulo Symphony comes up against stiff competition. How does it fair? Well, just average I’m afraid. My favorite performances of these three works comes on a Telarc RBCD from 1989, one of the first Telarc’s documenting the fine and underrated conducting of Yoel Levi with the Atlanta Symphony Orchestra. Levi’s readings are appropriately dramatic and intense but they never lose sight of the melancholy and tenderness that arises from time to time in these works.

In Symphonic Metamorphosis, Neschling and band sound slightly disinterested whereas Levi/ASO are sprightly and energetic. Telarc’s sound (despite being RBCD ) is also superior to the BIS, with a deep bass foundation and impact that is missing from the Sao Paulo sound. Another conductor who shone in this music is Herbert Blomstedt with the San Francisco Symphony in digital recordings made in the late 1980’s for London/Decca. His Metamorphosis is even more lively than Levi but sonically, the sound is not up to the Telarc/Levi, missing the important bottom end and sounding a bit too “in your face” and non-integrated. As a performance, however, Blomstedt is superior to Neschling bringing more vigor and excitement to the work. My order of preference: Levi, Blomstedt, Neschling.

In Mathis der Maler, Blomstedt takes every movement faster than Levi who seems more adept at using rubato in certain phrases. In the final movement, Blomstedt is two minutes faster than Levi making for an exciting performance. Even so, there is something special about Levi’s slower pace that draws more emotion from the score while not eschewing drama. The wide-ranging Telarc RBCD sound is also a big advantage – gotta love that big bass drum! Neschling’s Mathis is quite similar to Blomstedt in movement timings but seems to lack a degree of flexibility with the musical line. In the final movement, the crescendo at 1:20 lacks impact compared to the other performances under discussion. BIS’s SACD recording sets the orchestra a bit farther back compared to the Decca and Telarc recordings which blunts some of the impact. My order of preference: Levi, Blomstedt, Neschling (I sense a pattern here).

The great string melody that begins Nobillisima Visione is played tenderly by Blomstedt but the RBCD digital recording hinders the effect making the massed strings sound slightly synthetic. This same section from Levi sounds truly noble and grand while the sound of the strings possesses an appropriately massive texture, with cellos and basses creating a believable orchestral foundation. Levi takes almost two minutes longer to traverse the first movement which sounds more right to me compared to Blomstedt’s brisker approach. Neschling’s tempo in the first movement is close to Levi’s and invests the music with nobleness. The only thing lacking here is the orchestral foundation – cellos and basses don’t have the body and presence they need to sound realistic. Nevertheless, I like Neschling’s way with this piece more so than the other two works on the program.

Chandos undertook a project to record Hindemith’s orchestral music with Yan Pascal Tortelier and the BBC Philharmonic in the early 1990’s. I collected several of those releases but not the ones with Metamorphosis or Mathis because I already owned the Blomstedt. However, the RBCD containing the Nobillisima Visione shows Tortelier to be an equally sensitive conductor of this work and the sound is quite good too for RBCD standard – a wide dynamic in a spacious acoustic with a very good foundation. He takes the pace of the first movement about midway between Blomstedt and Levi to good effect. Overall, I am pleased with Tortelier’s conducting and Chandos’s RBCD sound. For Nobillisima, my order of preference: Levi, Tortelier, Neschling and Blomstedt.

Wrapping up, this BIS SACD falls short when compared to just a handful of extant RBCD recordings in both performance and sound. Taken on its own, it serves the music well enough and in decent enough sound but there are better to be had. Could it be that this music just isn’t suited to the temperament of the Sao Paulo symphony and John Neschling? Perhaps so. 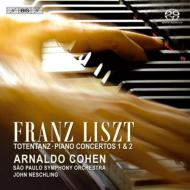 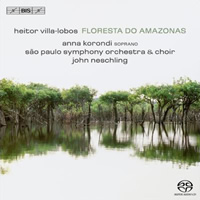