In October TowerRecords is going to release a SACD version (newly remastered by UK ClassicSound) of this 1972 recording. - The BluRay seems to be out of print, so the upcoming ... 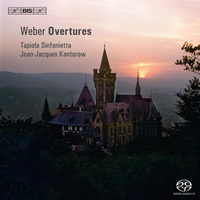 
Although celebrated as the father of German Romantic opera, Carl Maria von Weber is today generally known for one opera alone: Der Freischütz. Most of his other works for the stage – including the incidental music for several plays – are nowadays rarely performed. But their overtures have survived the test of time and are popular fillers at orchestral concerts, imbued as they are with Weber's particular mix of Romantic drama and lyricism and Classical lightness of touch.

Striking is also the inimitable, colourful instrumentation, which is given free reins in these scores for librettos and plays that are set in China and Arabia, and among Spanish gypsies and knights in 12th-century France. The present disc includes ten of these gems, from the overture to Weber’s first surviving opera Peter Schmoll und seine Nachbarn – composed at the age of fifteen – to that of Oberon, written in London for Covent Garden less than two months before his death from tuberculosis, aged 39.

The team of Jean-Jacques Kantorow and the Tapiola Sinfonietta have recorded numerous discs for BIS, by composers as diverse as Saint-Saëns, Mozart, Shostakovich and Rautavaara. Acclaimed releases have also been dedicated to the music of Weber, most recently his symphonies on a disc which was described as ‘without doubt among the finest additions to the Weber discography in recent years’ by the reviewer of the German magazine Fono Forum. His French colleague in Diapason was equally enthusiastic, remarking upon the dramatic qualities of the recording: ‘Kantorow stages a theatre of sounds in which each instrument is an actor…’

A time there was when collections of concert and opera overtures would appear on disc with great regularity. Nowadays this is something of a rarity, so this superbly played and recorded disc of ten Weber Overtures is to be especially welcomed.

The overtures to Weber's operas 'Der Freichütz', 'Euryanthe' and 'Oberon' are probably the most familiar to the majority of listeners, although the first is just as likely to be encountered today in performances in the opera house as in the concert hall. Nevertheless, each of the other seven works on this recording that span the last quarter century of the composer's regrettably short life, are minor masterpieces, illustrating the range Weber's unique genius.

Jean-Jacques Kantorow favours generally brisk tempi throughout, and the Tapiola Sinfonietta respond with characterful playing and crisp articulation. The smaller complement of strings allows woodwind, brass and particularly percussion to make quite an impact. Occasionally one misses the richness and depth of sound that a larger string section would have brought to these accounts, but this is more than compensated for by the attack and precision of the playing.

This BIS recording made in the Tapiola Hall, Finland is exemplary, possessing both an excellent spread and depth. In short, this delightful and exhilarating SACD can be unreservedly recommended.

A collection of Rossini Overtures from these artists would also be most welcome – how about it BIS? 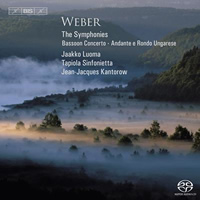 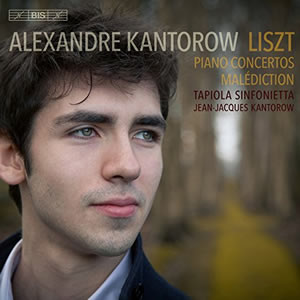