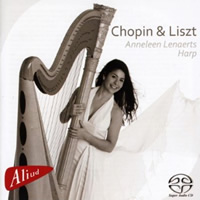 
Chopin & Liszt are both hailed as composers who belong, above all, to the piano. Liszt is perhaps the greatest technician the instrument has ever known, and Rubinstein described Chopin as the “soul of the piano”. Why, then, play these composers on the harp?

In December 2010 Anneleen Lenaerts was appointed Principal Harp of the Vienna Philharmonic.

Most recorded harp recitals these days tend to be compilations of pieces originated for harp - often the "usual suspects" from the harp repertory, which is much less voluminous than that for the piano. Naturally jealous of this other store of music by the great composers, harpists have at times adapted piano works to their own instrument - but this is not as easy a feat as it seems. Far from being a "grand piano frame stood on edge", the harp is fundamentally different in its mode of sound generation, of course; plucking the strings rather than percussion with felt hammers. This makes the harpist directly responsible for making sound with his or her fingers, rather than being at the other end of a complex mechanism.

Adapting piano music to a Grand Concert Harp, for example, has to overcome the following issues: plucking a string is a slower process than pressing a piano key; the harpist's right arm is wrapped around the instrument and cannot reach the lower strings (while the pianist sits comfortably in the middle of the keyboard); only four fingers are used per hand (no little fingers); in order to play chromatic notes, the pedal harps have 6 pedals, each of which has three positions (and these positions also affect the timbre of strings when plucked); once plucked, the strings continue to vibrate, with the bass strings sounding for many seconds and thus usually require stopping, while the topmost strings stop vibrating almost instantly (giving a cut-off sound not unlike the upper register of a wooden-framed fortepiano). There are a number of other issues too, but it is clear that considerable skill is required, first in choosing appropriate piano pieces and then carefully arranging them for harp.

Belgian-born Anneleen Lenarts is already one of our fore-most young European harpists. She has won a number of international harp competitions and already has worked with many well-known orchestras and conductors. In 2010 she was appointed as the solo harpist to the Vienna Philharmonic. She is thus eminently qualified to make her own arrangements of most of the Chopin and Liszt pieces on this disc (see track listing below); indeed her arrangements are amazingly true to the original texts. Although I have loved and played most of these pieces myself, all her harp renditions were revelatory in their lucid clarity and tonal allure.

The Liszt pieces come mostly from his early period, and apart from being tuneful and elegant salon-ware, they have technically daunting virtuosic sections, particularly in cadenzas. Lenarts tackles all these difficulties as though they didn't exist, with a fluency and natural ease which is breathtaking. Even the tricky Liszt concert study 'Waldesrauchen' (Forest Murmurs) comes off as if written for the harp, with a delicacy of touch in the passage work which is magically sprite-like. It is only in the fff passages in the bass, marked "strepitoso" (noisy) where one misses the sustaining power and pure "grunt" of a piano. That old warhorse "Liebestraume" comes newly minted, being given narrative flow which is usually neglected. Led by Lenart's dynamically-shaded singing tone to a spectacular climax with scintillating fireworks in the fizzing cadenza, this is an interpretation to treasure.

The carefully chosen Chopin works too are a wonder, from the passionate and wayward early Polonaise Op.26 no. 1, to a fragrantly perfumed Nocturne Op.9 no.1 and a simply superb rendition of Chopin's finest nocturne, Op.48 no 1 in C minor, which is as good as any I have heard from the great piano masters. Another hoary old Chopin piece, the Fantasie-Impromptu in C# minor, is presented as if new. The speed and clarity of articulation in the whirling notes would make any pianist green with envy, and the dramatic ebb and flow of the piece is superbly realised, with the full rich sonority of the harp brought into play at climaxes. I was left feeling that I might well prefer her harp version over the usual piano ones.

Anneleen Lenarts shines new light on the two featured composers with her compellingly idiomatic arrangements and spontaneous musical communication which goes from her nimble fingers (and feet!) straight through to the listener's heart. The Aliud recording captures every nuance of her playing, including some breathing and pedal-changing noises. For me, this adds to the sonic picture of a real musician playing in one's room, not too close and with an attractive resonant bloom to the sound in both stereo and MC. I did however, have to pull the volume back quite a bit from my normal listening setting; it seems that the disc was mastered at quite a high level, which took me aback at first. It was easy to find a level at which the proportional size of the harp's sonic image was sharply focussed and appropriate for my listening room.

This disc held me spell-bound, and I would love to hear some more from Anneleen Lenaerts; she is without doubt a musical enchantress. Enthusiastically recommended.