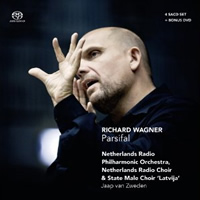 
Philosopher Ernst Bloch once referred to the ‘Bühnenweihfestspiel’ or consecrational stage festival Parsifal as ‘a metaphysical adagio’. In these few words he summed up the story line and the musical purport of Wagner's last opera – that is, if such a thing is at all possible in his operas, because as a composer Wagner was never at a loss for words when it came to bandying about statements artistic and non-artistic about the world in general and the universe in particular. Wagner’s musical theatre revolves around fundamental questions of human existence. Tristan und Isolde is about an all-consuming love, but also about the implications of the longing for love and the death wish. The work is about defining an identity through love and the loss of that identity through that same love. Der Ring des Nibelungen is about the incompatibility of love and the pursuit of power; it is also an in-depth exploration of the question of whether man has a free will, and it is about the eternal cycle of destruction and renewal which holds mankind captive on this earth.

Parsifal is about all of the above and much, much more. Wagner himself defined the theme of his swan song as ‘Das große Leid des Lebens’, the great suffering of life. Everything he still wanted to say at the end of his life about life, love, sex, psychology, politics, society, nature, art, Christianity, Buddhism, Judaism and anti-Semitism was mixed together in a grail chalice (poisonous, according to some) to form a ‘metaphysical adagio' of four hours of consecrational musical drama. Consecrational in the literal meaning of the word. Wagner’s own name for the genre, ‘Bühnenweihfestspiel’ means a consecrational stage festival. The plot of Parsifal refers implicitly and explicitly to Christianity and religious rites. Indeed, it was one of Wagner’s many ambitions to replace European Christianity by his own ritual art.

The Ring Wagner had to resolve the ‘problem’ of love in a new work. That work was Parsifal. The essential difference with all his prior works is the fact that there is no love in Parsifal. All the characters live in a loveless universe in which only the urge to reproduce – desire, lust – remains. Although Wagner's answer to this remains to be seen for the time being, one thing is important here. With Schopenhauer, Wagner does not view the urge to reproduce as morally reprehensible. He situated Siegfried, who suffered from the same fault in the Ring, in an amoral universe, not an immoral one – in a world where morals are not violated, but where all moral is absent. This is also the case in Parsifal, and it is part of the secret of Wagner’s huge success in the nineteenth century. (Part of the programme information written by Willem Bruls)