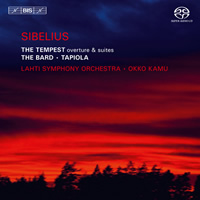 
To many, the Lahti Symphony Orchestra has become synonymous with excellence in Sibelius repertoire. Its numerous recordings with the previous chief conductor Osmo Vänskä have received countless distinctions and awards, and the orchestra is universally regarded as having a very special affinity for the music of their great compatriot.

On the present disc it is Okko Kamu, Vänskä's successor as chief conductor, who wields the baton. Kamu has been a presence on the international scene ever since the early 1970s, when he made a highly-acclaimed set of Sibelius symphonies in partnership with Herbert von Karajan.

Here three other works by Sibelius make up the programme, which opens with music for Shakespeare's play The Tempest, for which the composer in 1925 wrote the most ambitious of his several theatre scores. For concert use he later selected the Overture and two Suites recorded here.

In 1926, a year after The Tempest, Sibelius again turned to the realm of magic in his masterful evocation of the forest, the symphonic poem Tapiola. The title can be translated as ‘the domain of Tapio’, god of the forest in Finnish mythology, and according to Walter Damrosch, who conducted the first performance, the audience was ‘enthralled by the dark pine forests and the shadowy gods and wood-nymphs who dwell therein’.

From the start the work has been regarded as one of the greatest masterpieces from Sibelius’ pen. These two large-scale works are here separated by the seven-minute long symphonic poem The Bard from 1913, a work which in its treatment of the thematic material and the chamber-music-like quality of its scoring invites comparison with the Fourth Symphony of two year’s earlier.

In 1925 Sibelius wrote the incidental music for a performance of Shakespeare’s ‘The Tempest’ to be given at the Royal Theatre in Copenhagen. The full theatre score, consisting of 34 musical numbers, included parts for soloists, mixed choir and a large orchestra. In 1927, following a performance at the Finnish National Theatre, the composer extracted an overture and two concert suites from the full score and these are what we have on this marvellous new BIS recording.

The Tempest music is vintage Sibelius, coming as it does towards the end of his main compositional life, and there can be little doubt that Shakespeare’s play inspired him to produce some of his most pictorially vivid and imaginative music. The ‘Overture’ that precedes the two suites is one of the most terrifying depictions of a storm imaginable and Okko Kamu and the Lahti Symphony Orchestra unleash its power gradually in a way that adds an extra sinister dimension to its violent and dissonant character. Its repeat, in shortened form, as the last movement of the 1st Suite is here even more menacing.

The two Suites that follow are quite different in their overall mood. Both are made up of short contrasting individual movements, each one rarely more than a couple minutes in length yet such is the variation of style, scoring and mood painting that there is never any feeling of musical fragmentation in either suite. Suite No.1 is made up of nine movements and is scored for a much larger orchestra than Suite No. 2 and, on the whole, contains more dramatic music than its gentler ten-movement companion. Kamu takes a thoughtful unhurried approach to the first suite that allows movements such as the haunting ‘Oak Tree’ to register with maximum poetic effect, while his tempo for ‘Caliban’s Song’ perfectly suggests the oafishness of the character. He adopts marginally swifter tempi for each of the ten movements of the second Suite but nowhere do they seem anything but absolutely right.

‘The Bard’, one of Sibelius’s shortest and least often heard tone poems comes next. This is a masterpiece of great subtlety that only yields its secrets to the finest Sibelius interpreters. Kamu’s captivating performance, in which the finely balanced harp playing of Leena Saarenpää must be mentioned, shows him to be just such an artist.

The final work on this SACD is the symphonic poem ‘Tapiola’ from 1926, the composer’s last completed major orchestral work and one inspired by the legends and atmosphere of the vast Finnish forests. This much-recorded masterpiece has received many exceptionally fine interpretations in the intervening eighty-five years since its première in New York to which this one must surely be added. Kamu’s gripping performance has tremendous energy yet he never short-changes the listener in any of the reflective, desolate and icy passages in this music.

The recorded sound that engineer Fabian Frank has achieved in the clean acoustic of the Sibelius Hall, Lahti, Finland could hardly be bettered. The sound has tremendous impact and presence, with both a wide spread and depth. Balances are exemplary and the textures remain clear and uncongested even in the most heavily scored climaxes.

This SACD deserves an unqualified recommendation for both performance and sound quality.

The Tempest, Op.109, gathers together Sibelius’s incidental music for the Shakespeare play and was written late in his compositional life (which, unfortunately for all of us was a good 30 years before he died). The ghosts of the sixth and seventh symphonies haunt this material though the disparate nature of the various themes prevents it from being seen as a symphony itself. It is that disconnected nature that prevents this work from becoming more than a curiosity in the composer’s oeuvre. I much prefer works that follow an overarching symphonic plan and as a result this is not something I would listen to very often. Nevertheless, the performance here seems very good. Kamu and his orchestra (he became principal conductor of the Lahti’s this autumn) invest the music with passion and commitment. If you prefer tone poems and suites over symphonies, they could be your cup of tea.

The Bard, written 12 years earlier, is a concise (7 minute) tone poem written after the fourth symphony. The harp adds significantly to the orchestral texture here though the musical ideas are somewhat bare. A pleasant but hardly consequential work from this composer that has the composer’s fingerprints all over it. The performance does justice to the music.

Lastly, Tapiola. This is Sibelius’s last major orchestral work and, like the Tempest, is reminiscent of this late period in his composing life. Nearly as long as the seventh symphony (here, 17:36), it is a brooding and atmospheric piece that depicts the god of the forest in Finnish mythology. It has been recorded many times and this performance holds its own with any I’ve heard. Kamu builds tension appropriately and handles the whimsical portions with elan.

The recorded sound (stereo tracks) is splendid. Captured in Sibelius Hall in Lahti and engineered by Fabian Frank, the excellent Lahti orchestra sounds wonderful. A perfect blend of hall and direct sound makes the orchestra come alive. Add to that a good low-end foundation and wide dynamics and you have a realistic picture of the Lahti orchestra. Recommended to those who enjoy Sibelius’s tone poems. Those who prefer his symphonies (like me) may want to put this a little further down their SACD want list. 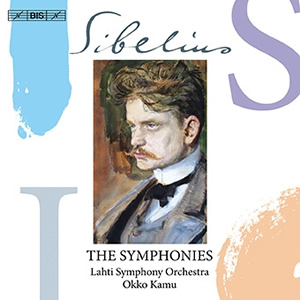