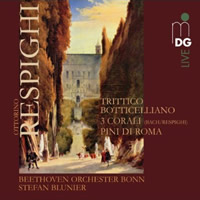 
Rhine Orchestra
The Beethoven Orchestra of Bonn is rapidly expanding its discography under its conductor Stefan Blunier. The orchestra’s outstanding live recordings also reflect carefully considered program planning. On this SACD the Bonn musicians dedicate themselves to the symphonic poems of Ottorino Respighi. In addition to Pines of Rome and Three Paintings by Sandro Botticelli, the highly successful orchestra presents Respighi’s rarely heard arrangement of three organ chorales by Johann Sebastian Bach.

Renaissance Impressionism
Like an impressionist painter, Respighi sketches Botticelli’s three most important works: Spring, The Adoration of the Magi, and The Birth of Venus. Early baroque stylistic quotations pervade these atmospheric pictures, which are rendered musically with a small orchestra’s fine brushstrokes.

Romantic Baroque
We encounter a completely different compositional facet in the arranger Respighi, who adapted a whole series of organ works by Bach for symphony orchestra and with them produced top-quality orchestral compositions. Amazing but true: Bach’s baroque and the romantic era are a perfect match!

Roman Atmosphere
Respighi’s four Pines of Rome is one of his most famous works, and these highly appealing musical atmospheric pictures fully exploit the tone colors of the large symphonic orchestra. Here MDG’s 3D recording technique is employed to perfection when the nightingale prescribed in the score is heard above up front on the left, the faraway trumpet position on the neighboring hill is heard up on the right, and the fluegelhorn part completely surrounds the listeners from behind.

The latest in MDG's fine series of live recordings by Stefan Blunier and the Beethoven Orchestra of Bonn is an intelligently chosen programme of three of Respighi's orchestral works that illustrate the many and varied aspects of this master orchestrator's compositions as well as his homage to music of the past. It is also pleasing to see two of the works making their first appearance on SACD.

The delicate 'Trittico Botticelliano' of 1927 was conceived while the composer and his wife were touring the United States and is representative of his interest in, and study of, the Renaissance and Baroque music of his native country. Respighi chose to depict both the atmosphere and spirit of three of the most celebrated of Botticelli's paintings, 'Spring (La Primavera)', 'The Adoration of the Magi' and 'The Birth of Venus' using small orchestral forces. Each of these three tiny tone poems is exquisitely scored, and thanks to Blunier's relaxed tempi, the players of his cultivated Bonn orchestra have time to relish each of the individual solo opportunities provided. The sound is both diaphanous and crystal clear.

Like many 20th century composers Respighi made arrangements of the music of earlier masters, and the 'Tre Corali' is one such example. His arrangement for orchestra of three of Bach's most well-known organ chorales may be anachronistic, but few could fail to marvel at Respighi's imaginative scoring and respectful treatment of them. The three chorales are 'Nun komm der Heiden Heiland', 'Meine Seele erhebt den Herren' and 'Wachet auf, ruft uns die Stimme'. The manner in which the luxurious and glowing string sound has been captured on this recording is particularly arresting.

The final work on this SACD is the much-recorded 'Pini di Roma', the second part of the so-called 'Roman Trilogy' and a piece beloved of many audiophiles. Blunier is not a conductor who rushes his fences and his tempi in all but the first section of the work are slightly more measured than is often the case, but are nevertheless quite convincing. The first part of 'The Pines near a Catacomb' is wonderfully atmospheric as is the balancing of the distant trumpet and nightingale song in the section that follows. Unfortunately the total absence of deep organ pedal notes at any point comes as a major disappointment. Blunier's steady pace does pay dividends as the army of the Consul traverses the Appian Way accompanied, on this recording, by exceptionally thunderous drums. It is, however, a pity that the use of the surround channels for the extra brass is a mite cautious and consequently the work's final bars fail to make the impact found on the recent thrilling Neschling recording Respighi: Roman Trilogy - Neschling. An enjoyable performance then, but not a first choice for this work in an increasingly crowded field.


MDG's 5.1 recording is of high quality, possessing a wide dynamic range, an excellent sense of depth and tonal veracity, but it is important to stress that this disc does need to be played at a high volume setting or the sound can seem somewhat lacking in presence. Though these are live recordings, extraneous noise is minimal and there is no applause.

Not withstanding the reservations outlined above, this is a most enjoyable SACD.

The Trittico Botticelliano is scored for a relatively small orchestra but supplemented with a reasonable array of percussion instruments. This choice of instrumentation aides Respighi's oft-used glistening sound and the Beethoven Orchester of Bonn respond with audible enjoyment to this triptych. Despite being a recording of concert performances, there is remarkably little audience noise and nothing that one could fault in the orchestral response. More enchanting still are the 3 orchestrated chorales of Bach - it is relatively rare to hear a modern orchestra of any size & stature perform Bach these days (let alone in such extravagantly orchestrated versions as Respighi's) and for those younger listeners who have only heard HIP & period-instrument performance, this is obligatory listening for discovering the "romantic" mind-set towards Bach (and other composers). Blunier is unashamedly un-reconstructed and produces glorious sounds from the Beethoven Orchester in all 3 chorale preludes.

The most commonly performed of all works on this disc concludes the programme: the Pines of Rome. Whilst the playing is good, at no time does it approach our modern classic: Respighi: Roman Trilogy - Neschling nor more time-honoured treasures such as Respighi: Pines of Rome, Fountains of Rome, Debussy: La Mer - Reiner. Neschling's great theatrical device is to place the off-stage brass around the listener & it makes for a thrilling effect when they combine with the rest of the forces on the Appian Way; Blunier though has not placed his players comparably (and this may be his only option in Bonn) but it is sorely disappointing as a spectacle (which is surely a major element for which this composition was intended). I also found his choice of rather hard timpani sticks leading to a curiously light-weight climax on the Appian Way; disappointing.

Sonically, this is one of the stranger Beethoven Orchester/MDG releases - the level is unbelievably low and yet the playing doesn't seem to have a huge range in dynamics. Otherwise, most of the detail in the scores is audible but by no means does it challenge the BIS release in this regard either.

A shame for both Blunier, the Beethoven Orchester & MDG for they have had the opportunity to present an engaging and well thought-out programme squandered.