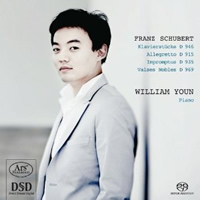 Korean pianist William Youn's debut piano recital disc (2010: Chopin / Schumann / Wolf - Youn) was an impressive introduction of his art. It demonstrated his approaches to Chopin, Schumann and Wolf, in particular his clear articulation and expressive phrasing. Similar skills are employed in this programme of Schubert's domestic music. Youn's experience in also playing fortepiano with HIP styles has no doubt contributed to his work here on a Steinway, in that he shows and applies knowledge of the Viennese Classical style from Beethoven's and Schubert's day. Beethoven was of course a significant influence on Schubert, and in these intimate domestic piano pieces the echo of Beethoven's spirit is hard to miss.

This is particularly so in the charming and nostalgic Allegretto in C minor (D 915). Written in April 1827, the year before Schubert's death, it marks the departure of a friend, Ferdinand Walcher, to Venice. One is immediately struck by the opening motif in bare octaves as being unmistakably close to the main theme in the scherzo of Beethoven's Fifth Symphony. Schubert takes the theme and weaves it into a clever sonata form, which combines his feelings about missing his friend and also saluting Beethoven, who died on the 26 March 1827. Schubert apparently visited Beethoven on his death-bed, and he was one of the pall-bearers at the composer's funeral. Youn's interpretation is compelling, particularly because (on this occasion) he carefully observes Schubert's dynamic markings, which are so critical in this piece.

Schubert wrote two sets of four pieces entitled "Impromptu". The model for this "form" was derived from Bohemian composer Vláclav Tomášek, transmitted to Vienna by his pupil, who took up residence in the city. Most of these short pieces have a generally ternary structure, and some have a processional style which echoes the "wanderer" theme of many Schubert works, especially in Lieder. Youn chooses the first set, D 935, also from 1827, which was published postmortem as Op. 142. He clearly depicts the Beethovenian influences in the first Impromptu in C minor, and also has clear references to Schubert's youthful "Wanderer" Fantasy in C. There are some exquisitely played alternating high and low voice question and answer phrases in the closing pages of the Allegretto sempre legato in Impromptu no. 2. In places, however, Youn can be cavalier about fully obeying Schubert's dynamic markings, with too little difference between p and pp, f and ff. Also, the first repeat of the Trio in this movement is omitted. This habit of Youn for omitting seemingly randomly-selected repeats appeared in the Schumann piece on his first disc.

There are also several missing repeats in the divine third Impromptu, a masterful set of variations on a theme from Schubert's 'Rosamunde' incidental music. However, Youn plays the famous tragic variation in B flat minor with a tender nobility which is very endearing but never over-done. The first repeat of the playful fourth Impromptu is also ignored, although Youn's inspired idea of showing how close this music is to the popular Viennese "Turkish" mode is excellent.

Very little of Schubert's music was published in his lifetime. Schumann and Brahms published what they could find in the composer's belongings lodged with his family. Not all of his works were finished or properly labelled, so Schumann and Brahms often had to rely on their own notions. A case in point is Brahms's publication of "Drei Klavierstücke" (D 946) in 1868. He considered that the three separate autograph MSS might have belonged to another sonata, but in the end simply called them "Three Pieces". Certainly the autographs are not fully complete in many details; certain tempo markings are evidently missing. Youn responds very well to these 'al fresco' works with the zest they command. The leading Allegro assai is full of nervy tension, its middle section richly chorded, and the prominent dissonance at the return of the main theme is projected as are Schubert's wonderful key changes. Once more however, the dynamics are too smoothed-out: here he does not have is enough difference between ppp and pp. The lieder-like Allegretto is flowing and sympathetically phrased, but a repeat in the second section is ignored. The final Allegro is rhythmically exciting with its comic scherzo style twisted from 3/4 to 2/4 time, brought to a virtuosic conclusion.

Another important part of Schubert's domestic music was for dancing. The Waltz, derived from the 3/4 rhythm Austrian country Ländler, was becoming all the rage in Vienna. Schubert would improvise chains of waltzes and other dances to entertain his friends at their gatherings (often called "Schubertiads") and wrote these down for others to play. The Valses Nobles (D 969) was the favourite concert-set of his circle. The dances rarely appear in recital or on recordings, so it is enterprising of Youn to include one set in his programme. As the waltzes are mostly comprised of two short sections, each being repeated, I worried at first that Youn would skip over many repeats. However, as far as I could tell, only the second repeat in the seductive No. 3 was omitted. Youn makes the most of the more rugged and louder waltzes, rather than just suggesting their Ländler origins, and perhaps some of them are more forceable than danceable, the recorded dynamics once again being less controlled than is ideal.

Youn is awarded a fine representation of his Steinway by the Ars Production team. As the piano sound was set down in the Immanualskirke, Wuppertal, I would have welcomed some more of the ambience of the church acoustic, to give the listener more sense of scale and to focus the piano in its setting. As it is, the sound is intimate, even in 5.1 Multichannel. Booklet notes are informative and in German and English, but I'm not enamoured of its spidery Courier typeface which looks, well, like a typewriter, not having proportional spacing to carry the eye along.

These are on the whole thoughtful, emotively wrought and (mostly) played with a light Classical touch, rather than the later Romantic style preferred by some senior Schubert interpreters. I enjoyed the recital very much, despite the problems with dynamic range and omitted repeats. If you listen without a score, and do not know these pieces intimately, you will find this a memorable Schubert experience. Indeed, it would be a good choice for those building a new collection in SA-CD, as the programme is a good start before moving on to the more problematic and inventive sonatas. Still in his 20s, William Youn has the flair to be an excellent and sympathetic Schubert player, but he has yet to attain the finesse and subtle control of dynamics possessed by players such as Brendel, Perahia and Lupu, to name but a few. The technique is there, however, as listening to his sparkling and perfectly articulated ornamental roulades with which Schubert garnishes his some of his Impromptus and 3 Pieces will demonstrate.

Recommended, but with reservations for connoisseurs, concerning inexplicable omission of some repeats and sometimes cavalier ways with dynamic markings - Youn is not the only young pianist who exhibits this trait.