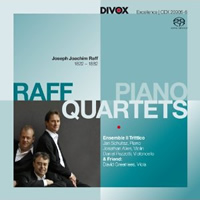 Raff composed two piano quintets late in life. Both were composed in 1876 and denoted as Op. 202 No.1 and Op.202 No.2. One could say that these works represent the culmination of his chamber music experience and they are indeed an excellent example of the genre and of late romantic music in particular. I will go so far as to say that they are fully the equal of Brahms’s piano quartets and in some ways even surpass them. The best I can tell, this is the only available recording of them. What took so long?

Opus 202/1 (G major) is in four movements with a duration of 38:37 in this performance. From the opening of the first movement Allegro, the listener is in for a treat. An explosion of sound launches us into the main thematic material with lots of inventive piano writing and harmonies. The elan is carried through the entire movement. Then, the allegro molto second movement takes off with some fancy piano writing into a scherzo-like bustle that eventually calms to a brief period of stasis only to erupt again for the final measures. Things take a more serious turn in the succeeding andante quasi adagio with a transition to minor key and plaintive melody from the first violin. The dynamic ebb and flow of the ensemble is tantalizing while the various strings take their hand at the melodic material. The cello theme accompanied by block chords on the piano and pizzicato strings is especially nice. The allegro finale begins back in G major with what sounds like a hunting call – piano declaration with strings answering. The exposition begins apace with a lively theme that is developed and shared between piano and strings. This culminates in a convincing coda. The performance of the Ensemble Il Trittico with violist David Greenless is simply amazing.

Opus 202/2 (C minor) is also in four movements with a duration of 39:22. And, as one might expect for two works conceived in such close proximity of time, they are in many ways clones. This is not to say that there is any redundancy of material but rather that both quartets share the same high level of inspiration. The minor key casts a darker shadow over the beginning allegro movement. However, it is not long before Raff’s playfulness inserts itself in the thematic material only to be slapped down by the minor key theme. The movement ends in a hectic rush with two slashing final chords. The second movement is also marked allegro and also launches in the minor key as if the composer wasn’t quite done with the ideas in the first movement. There are strong reminders of Brahms piano quintet here with the rustling low notes in the piano. The movement ends with a playful, mezzo-piano interplay between piano and strings. The ensuing larghetto is an autumnal song in A-flat major. The theme is first introduced by the piano and them taken up by the cello. Lovely. The lyrical theme is developed over the course of its 10+ minutes – a serene island in a stormy ocean. The calm of the larghetto is rudely interrupted by the concluding allegro which returns to the minor key. The movement builds to an exciting climax. The performance is once again excellent.

The sound is excellent (in stereo). This was recorded in the music hall of La Chaux-de-Fonds in Switzerland where many chamber music recordings have been made in the past on the Philips label (the Beaux Arts Trio’s Brahms piano quartets released on SACD by Pentatone were done here). The recording engineer is Stephan Schellmann. The ensemble is captured in a very realistic balance with wide dynamic range. Instrument tonality is terrific and the low end foundation of the piano and cello are properly accounted for. The balance of direct and hall sound is also nigh on perfect.

What a great and enjoyable surprise this SACD was! This is among the very best SACD’s from 2011. High praise to all involved – Ensemble Il Trittico, David Greenless and the Divox recording team. Don’t miss it.