A Bridge of Dreams - Hillier 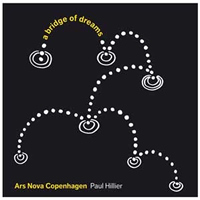 These days, commerce may well be considered as global, yet the Arts, and 'serious' music in particular, remain stubbornly Eurocentric. Although there is a plentiful flow of excellent performers from East to West, the media moguls relatively rarely treat music lovers in the West to composers who are less Eurocentric. However, as one of the premier international chorus-masters, Paul Hillier frequently encounters composers with Eastern origins or orientations, and in this album he brings some of them together, producing a disc of 'a capella Music from the Pacific Rim', the subtitle of the album.

The project has been quite a while in development and execution. Ars Nova Copenhagen is a peerless chamber choir, directed and conducted by Hillier, with the necessary technical and musical skills to adapt to a myriad of contemporary vocal styles. After the planning stages in which Hillier prepared scores he had been collecting for some years, recording sessions took place in 2006 and 2010. The programme represents a wide range of forms, influences and philosophies with music which is very approachable (often involving a variety of melds between European musical traditions and Eastern ones).

Lou Silver Harrison (1917 – 2003) was born in Oregon but spent most of his life in and around San Francisco, musically looking eastwards across the Pacific. He was particularly influenced by Gamelan music, adopting its tuning and microtonal harmony. In his 'Mass for St Cecilia's Day' (1983) he blends these influences with the melismatic melody of European Gregorian Chant. Andrew Lawrence-King, the nominal specialist in ancient harpistry, uses a medieval harp, psaltery and droning hurdy-gurdy to realise Harrison's accompaniments, which are improvised according to directions in the score. This is a full Mass, not just the usual Ordinary of the Mass (Kyrie, Sanctus etc) but also with the Proper, including all the extra sections specific to the Feast of St Cecilia. Using alternating male and female choirs as well as mixed voices, this is a most beautiful, glowing work. Moving from the softest intonations to billowing tiers of sound which fill the wonderful church acoustic, Harrison brings both religious fervour and drama to the Mass in celebration of Music itself. I was constantly reminded of the free-wheeling, ecstatic chants of Hildegard of Bingen, so successfully are the Balinese and Chinese harmonic schemes built into the ancient Latin chants.

Ross Edwards (b. 1943) is one of Australia's best-known and most respected composers. He seeks to connect music with the elemental forces of his country's landscape and Aboriginal heritage. 'Sacred Kingfisher's Psalms' (2009) is, as Hiller puts it "a stunning virtuoso work for chamber choir". Previously very much a Modernist, Edwards has returned towards pulse and tonality, but is still rooted in the Australian landscape, and in this case, its bejewelled night skies. He uses Latin Vulgate texts from Psalm 1 and 130, which are interiorised contemplations of goodness, seasonality and purity of soul. These are followed by a remarkable chorus. It features polyphonic and polyrhythmic ceremonial chanting of Aboriginal bird names (such as binit - the tawny frogmouth, garrangangabumarri - the pelican; gulina - the rufous night heron and dyramak - the sacred kingfisher). Ars Nova respond to this stirring piece in a performance which is both dramatic and technically dazzling.

Jack Body (b. 1944) is a New Zealander who writes in a wide range of music forms and is also captivated by the music of the Pacific Rim. His 'Five Lullabies' (1989) fit the Ars Nova choir very well, given their expertise in medieval polyphony. Body bases the lullabies on his studies of ethnic minorities in China with the Dong and Hani peoples, who sing in seconds - about as far as one can get from Western Polyphony. Not all the music is soft and gentle (the vibrant seconds make the music seem to shimmer); there are two lullabies sung by fathers, who have rather boisterous dreams about what their child might become. There are no texts as such, just melodic and rhythmic vocalisations which hint at African, Turcic, Latin and a hint of Japanese.

The most eclectic work of the album is 'The Seafarer' by Liu Sola (b. 1955) & Kevin Crossley-Holland (b.1941). Briefly, Liu Sola wrote and performed a xiqu (café opera) in Beijing about her famous mother's after-life. Andrew Lawrence-King extracted some of the instrumental interludes of the opera to make a solo suite which he could play on his psaltery. He then had the idea of adding a recitation of 'The Seafarer', an Anglo-Saxon poem translated into English by Crossley-Holland. The thinking here is that the poem is about life as a journey, with remarkably similar moods and imagery as found in Japanese medieval culture. So east and west meet again in words and music. I am usually very dubious about the effectiveness of music with spoken recitation, but in this case I was surprised how well the marriage works. Paul Hillier (himself a yachtsman) speaks the fine words of the poem quite naturally, in resonant tones but without too much attempt to make them sound epic, and King's underlying emulations of Japanese string instruments in Liu sola's music are very atmospheric.

The final track is the signature one, Anne Boyd's 'As I Crossed a Bridge of Dreams' (1975). Another Australian composer, her music is "based on the intersection of Christian Love with Buddhist silence". The choral piece was written after she read in translation an ancient diary (now a popular book in Japan) which details the life of a nameless woman, her journeys and dreams. Again Ars Nova use wordless vocalisations which Boyd bases on the sho (a Japanese mouth-organ). They sing very softly at first, with vibrant gently-dissonant harmonies and slowly moving melody. Gradually the layers build up in volume to a resonant climax with high bird-like calls from a soprano, some voices being spatially separated from the main chorus, adding another dimension. The reflective hard walls of the church venue in Copenhagen amplify and add to the resonance and rich overtones of the singing voices, a marvellous effect if you have multichannel sound, where the music truly surrounds one in a timeless, dream-like fashion. Unforgettable.

I can sum up the recording quality on this disc in a single word: magnificent. Originated in DXD, the realism and perspective of the choral sound is simply breathtaking, and one is very aware of how well the singers exploit the very responsive church acoustic. Presented in a single gate digipak with its booklet in a pouch, this is a very well presented disc; even to its front graphic, an aboriginal-like glyph which is intriguing (if slightly disturbing). Paul Hillier writes the booklet notes in terms of the chronology of his collecting material: interesting, but somewhat inconvenient for the listener, as the pieces are not discussed in track order. Full texts are given (mostly Latin with English translation).

Lovers of choral music should not miss this inspiring programme, given a typically superlative performance by Ars Nova Copenhagen; their sharp focus, immaculate precision in tuning and ensemble, complete commitment and virtuoso technique is second to none, and we can now add their skilful exploitation of a venue's acoustic. Unmissable.