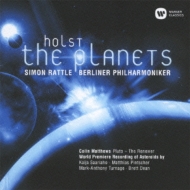 The four asteroids (Saariaho's "Asteroid 4179: Toutatis", Pintscher's "towards Osiris", Turnage's "Ceres" & Dean's "Komarov's Fall") formed the first part of the concerts from which these recordings are taken. Whether it is the brutal ending of Ceres or the emptiness of the opening to Komarov's Fall, the playing (and conducting) is electrifying. Here, Rattle fully transmits his passion of supporting and championing new music and the Berliners respond in kind. Although very different in their use of musical form and (dis)harmony from the Holst, these four miniatures are conveyed with complete conviction and hold this listeners attention from beginning to end.

The second part of the three concerts that were taped for these discs comprised Holst's The Planets immediately followed by Colin Matthews' "Pluto, the Renewer" which is written as a companion piece of the Holst. Matthews is clever (and kind to those wishing to preserve the Holst on its own) by beginning in complete silence, which allows us to choose whether we want the "traditional" 7 solar system or an expanded 8 celestial bodies by programming our disc players. The interpretation treads a fine line between a "traditional" approach and finding something "new" to say. For the most part, the newness comes in getting the Berliners to bring a more disciplined response to their characteristically gorgeous timbres than they did for Karajan; Rattle is mercifully sparing in his interventions in this score. Where he does explore a (slightly) different approach to Holst's evergreen piece, Rattle is careful to tread lightly: there will be few who find much (if anything) to grumble about and there is much that tickles the ear in delight. From the woodwind solos to the solo strings to some very focussed brass and percussion playing, this account has most (if not everything) that one could wish for; the only notable absence is a spotlit organ obliterating all around it that marrs so many a recording - a studio account would however correct the inability to hear the organ at all.

After such a powerful and unrelenting climax to Mars, the gossamer violins at the end of Venus are transformed just as much as they are in the central section of Jupiter. Similarly miraculous is the blend of celeste and wind in Mercury; this is fleet of foot playing with such delicate tone from the Berliners seldom heard on disc prior to Abbado's arrival that is exquisite to hear. Jupiter is arguably the trickiest to bring off, if only because of the familiarity of the music. The cello & horns grand statement shortly before the great lyricism of the central section is allowed to treated as if coming from the Austro-Germanic tradition of music - this is one of the few interpretative decisions that sticks out from the whole, even on repeated listening. The centrepiece of Jupiter is played with incredible passion after starting with noble restraint; few manage such a dramatic change of emotion with complete conviction as Rattle does here. The close of Jupiter is very impressive, with greatly disciplined playing but not necessarily the outpouring of joy that others have found.

The expressivity of the Berlin strings in the opening of Saturn is beyond reproach and is matched by the brass. The sustained & gradual crescendo is just as powerful (if not more so) than that delivered earlier in Mars but just as importantly, Rattle persuasively releases the tension as sensitively as it was ratcheted up. Saturn brings a real sense of menace to it and Rattle makes a firm case for positioning it alongside Dukas' L'apprenti sorcier. As ever, the key to a really satisfying performance of The Planets is the concluding Neptune. When done well, the voices can almost literally sound as though they are coming from another world. This account was done well. As a planned (and semi-compulsory) encore, the collective forces follow immediately with Matthews' "Pluto, the Renewer". As with the four "asteroids", the response is deeply committed and beyond criticism which in such close proximity perhaps highlights a certain reserve in the Holst.

The sound, recorded in concert March 2006, is better than many from the Philharmonie. Perhaps to (very successfully) minimise noise from the audience, the microphones give slightly less "air" to the proceedings than might be ideal but the clarity of textures is very good considering. One must be honest and recognise that it is not in the same league as a first rate studio recording from the likes of BIS, Chandos, Channel Classics or PentaTone but it is one of the best examples of this orchestra on disc; the immense depth from the double bass section is often tangible and seldom captured this well. Despite all the labelling to the contrary on the disc, the booklet and the casing, this is a hybrid MCH/stereo disc.

This is a highly recommended purchase for all Berliner afficionado's as well as fans of Rattle's conducting. There are few examples of their collective work in promoting new music and it is illustrative to hear how fiercely committed all concerned are to every new note (5-stars) but slightly less so if they're old notes (4-stars, Holst).

If anyone out there actually has a copy of this one, can you please tell me two things: Is the logo on the front EMI or Warner, and what is the barcode? I'm trying to track a copy down, and the listings I've seen are a bit confusing. Thanks!

Like many of the early Japanese EMI SACD's this was issued first by Toshiba EMI in Japan with the EMI Classics logo on the front cover. However, when EMI folded worldwide and Warner gained the rights to the old EMI Classics catalogue it was reissued by Warner Japan with the Warner logo on the front. It's now not possible to link to the old EMI issue from this site as the catalogue numbers were changed to the Warner ones and the links changed likewise. For the record, the barcode number of the original issue with the EMI logo was 4988006887534. There's no difference other than cosmetic between the two, though I have to say it slightly offends me to see the wrong record company logo on the front of these re-issues.

Thanks, to both of you, for the reply and info. With the barcode, I can save a search in Ebay that won't bring up oodles of wrong things. I think this one is going to be a tough find.

If anyone else is looking for a copy, it appears to be back in stock at HMV Japan. I ordered one on 7/23/19 and just got the notice two days later that it had been shipped. It was fairly expensive, though.

Re-mastered in DSD but puzzlingly lacking in detail, dynamics and expression and not a version that can be recommended. I wondered if this really was a very suitable repertoire for SSR?

The composer ascribed characteristics to each piece... Mars, The Bringer of War and so on and it is the conductor's job to colour in these outlines in a convincing way. IMHO SSR does not rise to the occasion and one is left with a somewhat over polite and distracted set of interpretations which do not capture the moods effectively to one's satisfaction.

In such a crowded field this is very much an 'also ran' and bearing in mind the not inconsiderable cost of importing the disc not good value for money.

PS We have the original EMI marked disc.

Yep, when this one came out, over a decade ago, the reviews were about as mixed as imaginable. BBC Music Magazine gave it 5 stars, while Classics Today only gave it 5/8 (and that was Victor Carr Jr writing, not David Hurwitz).

As a collector of Planets recordings, I had to have it for the extra "asteroid" pieces. I would rate this version of The Planets about the same as Andrew Davis' recording for Chandos, well played, but not terribly engaging. If you only need one recording of the Planets (or Elgar's Enigma Variations), get the new Litton on BIS.