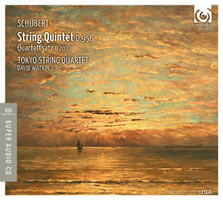 
Cellist David Watkin, formerly of the Eroica Quartet, joins the Tokyos in this distinguished reading of Schubert's 'Quintet in C' - the last and perhaps the most haunting of all his chamber works, in which light and shadow, serenity and drama are presented in constant alternation. The programme also includes the 'Quartettsatz' of 1820 with its fragmentary slow movement.

To stand in the tiny windowless box room of his brother's apartment where in 1828 Schubert spent the last few months of his life, increasingly bedridden, is a deeply moving experience. It prompts meditation on his indomitable spirit. Coping with the dissolution of body and mind by the tertiary stage of syphilis and mercurial poisoning, the young composer was none the less able to pen some of his greatest masterpieces, including the String Quintet, completed only 6 weeks or so before his death.

Schubert's music is always prone to slip between major and minor keys, representing light and darkness, but in the String Quintet these contrasts are more frequent and more intense. In its outer movements, the Biedermeyer gaiety of Vienna prevails in song-full mood, but the listener is tugged frequently into the darker shades of reality for a stricken composer. The Quintet's inner movements, too, have their lyricism but here overwhelmed by episodes of violent anger and sustained despair.

Schubert augments the usual string quartet with another cello, being particularly fond of the warmth and vocal nature of its lower registers. In this he followed Boccherini, rather than Mozart and Beethoven, who preferred an additional viola.

Recorded performances of the String Quintet come in two forms. Ad hoc gatherings of stellar soloists may sometimes be dominated by competing egos, but an unmissable example is from the 1952 Prades Festival which fielded a dream team of Alexander Schneider, Isaac Stern, Milton Katims, Paul Tortelier, and Pablo Casals. Regular string quartets also play the work by recruiting a guest cellist, and there are many fine expositions from these sources. A particular favourite of mine is a period performance by the Smithsonian Chamber Players, using Stradivarius instruments in the museum's care. One of the cellos used has survived unmodified (most early cellos were cut down in length during the C19th to increase brilliance for orchestral use). The entry of this noble cello, with its remarkably deep overtones, gives one a real frisson.

The Tokyo Quartet is without doubt one of the best in the world, and has moved from their long-standing housing within DGG to Harmonia Mundi USA, a boon as they can now record in SACD. They too play on Stradivarius instruments, this time from the Paganini's personal collection. Their appointed second cellist is David Watkin, a remarkable musician who manages to star in both the period and modern musical scenes, both as conductor and as cello soloist. He has led cello sections in many of the international period orchestras, as well as for the Philharmonia, and conducted these organisations too. I suspect that he has also discussed his research on Classical and early Romantic Viennese string playing practices with the Tokyo group, whose playing seems marvellously in tune with late Schubert's style. Their vibrato, for example, is noticeably more controlled that that of the Prada ensemble mentioned above, and there are frequent expressive hints at portamenti.

Immediately impressive is this ensemble's richness and beauty of tone and their wonderfully flexible internal balance. They are aided by a distinguished recording, realistically intimate but at the same time airy. The virtual presence of the players just beyond one's speakers is totally convincing. Their take on the first movement of the Quintet presents a warmly contented yet potentially fragile Viennese lyricism, with melting transitions and adroitly built crescendos, yet giving way to outbursts of sterner rhetoric. As with most recordings, including the Prades one, all of Schubert's repeats are taken, and sensitively varied; this makes for a first movement over 20 minutes long (the Tokyo's movement times are surprisingly close to those of the Prades ensemble).

In the sublime E major slow movement, their gently flowing pace seems to make time end, as the lovely melody unfolds on the inner instruments and the outer players decorate with caressing, wistful short interjections seemingly from unspoken poetic lines. The players next plunge into the almost violent F minor central section - desperation followed by desolation - but, unruffled, resume the E major melody with even more radiant tone and rich embellishment, the second cello murmuring consolatory phrases. The Tokyo's Scherzo begins Presto with terrific attack worthy of an angry Beethoven, relaxing into a genial Viennese dance which is several times dispatched with ferocious dissonances penned by any Second Viennese School composers. Thus we have a clear impression of a man who goes seriously off the rails at times. As usual, Schubert regroups and offsets the darkness once more in his Trio, where a rich and resonant partnership of viola and cello present a glorious melody, upon which the gloom once more descends.

The Tokyo's final Allegretto is rustic and bumptious, rhythmic with cock-eyed syncopations in an irony which is almost of Mahlerian proportions. A section with another song-like passage is decorated with unique fluttering violin parts, beautifully nuanced, with heady climaxes as if the composer was desperately clinging on to life. A brief look back at Academia follows in a fugato, culminating in the return of the song melody. A reprise of the initial dance theme follows but is suddenly swept away by a last superhuman burst of energy in a helter-skelter dash for home, played by the Tokyo with perfect ensemble and élan.

The vivid nature of my descriptions of this performance comes from a reading which brings forth the spirit and humanity of Schubert in playing of great insight and empathy, and as such it must join the great interpretations.

As a nicely comparative fill-up, the Tokyo offer Schubert's "Quartettsatz" in C minor, an unfinished remnant of quartet-writing project from 1820. The superb (complete) first movement has been hailed as one of the most perfect of its genre. It is followed by the tempting fragment of a sweet Andante; both pieces being the victims of Schubert's sometimes over-thought personal critical faculty. Fragments they may be, but the Tokyo Quartet gives them full attention. Helpful notes in the booklet give more detail about the inception of the proposed quartet.

This is a powerfully moving performance of the String Quintet in which the Tokyo Quartet and David Watkin dig deep into Schubert's and their own souls. With breathtaking sound, I'm almost certain that this will prove to be my SACD of the year. Please don't miss it; even if you are not normally a fan of chamber music, this performance gives luminous insight into one of humankind's great achievements.