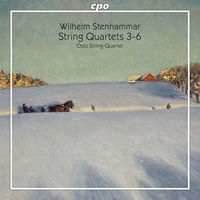 »My work demands all my energies, and the rehearsal of Sten’s quartet has gripped me completely. We worked like madmen out of joy in it; I perhaps with more pain than on any other occasion, for I understand the core of this piece so desperately well that I dream about it at night.« It was the violinist, string quartet leader, and composer Tor Aulin who raved with such empathy while preparing his friend Wilhelm Stenhammar’s fourth string quartet for performance. Stenhammar unfortunately even today continues to number among the group of those composers whom one might term the »great unknowns«; nearly all the works compromising his rather compact oeuvre are of pronouncedly high quality. Unlike Grieg, Nielsen, and Sibelius, Stenhammar never attained the status of a musical icon in his native country – for political and social reasons Sweden evidently had no need of such an influential personality. On its wonderfully harmonious and homogeneous new Surround recording of Stenhammar’s Quartets Nos. 3-6 the Oslo String Quartet impressively demonstrates that he merits much greater representation in today’s concert world than is currently the case.

‘Wilhelm Stenhammars string quartets don’t enjoy the popularity they deserve’. It sounds banal. We have heard that so often when new works of ‘forgotten’ composers surface. Most of the time the reason ‘why’ appears after listening to them a couple of times. At first they sound like Haydn, Mozart etc. but after a while it becomes clear that they lack their genius. And that’s probably why they have been forgotten. Of course, this doesn’t necessarily mean that they were bad compositions. In the chamber music department many compositions had no other purpose than to please the listener. The pop music of their time, so to speak. Many works of Haydn, Mozart and a number of romantic successors served to a large extent the same purpose. But theirs remained. Evergreens, you might say, to stick to the metaphor. So, what about Stenhammar's string quartets? If you look at his vital statistics you will see that he was born in 1871 and died in 1927. In the second half of the 19th century, Brahms was seen as a ‘late-flowering’ romantic. Stenhammar, therefore, is ‘way out of phase’ as these quartets, composed at the beginning of the 20th century, are romantic pieces in the style of Mendelssohn and Schumann. Not devoid of self-esteem, he himself considered his quartets as building upon Beethoven's heritage. He clearly was not an innovative composer, and he admitted this in so many words (and I quote from the excellent liner notes): “…in these Arnold Schönberg times I dream of art far away from Arnold Schönberg, clear, joyful, and naïve”. Would this be the reason why his string quartets have largely been forgotten? In Central Europe times were changing and Stenhammar choose to play no part in it (like other composers of Nordic chamber music, by the way). However, listening to his quartets it becomes clear that they do not lack quality. On the contrary, they are full bodied and well-constructed (sounds like good wine!) and we must be grateful for CPO having brought them to the surface. And not only for that, but also for contracting the eminent Oslo String Quartet to convey its beauty in first rate Multi-Channel Super Audio format, albeit with some resonance due to the recording venue (Jar Kirke –church-, Oslo, Norway). The playing is precise, romantic and forceful. They make for excellent Sunday morning entertainment.

These are excellent string quartets, inventively written with good melodies and consonant tonalities throughout. Why they have not gotten more attention from ensembles and record companies in the past is a mystery to me. Back in the early 1990’s, Musica Sveciae released Stenhammar’s six published quartets on three RBCD’s performed by three different quartets: the Fresk, Copenhagen and Gotland. These were analog recordings made in the early 80’s and they formed my introduction to these fine pieces (they also garnered the Swedish Record Award). I fell in love with the music. Since then, there have been no other recordings until this one by the Oslo String Quartet which, frustratingly, does not include quartets 1 and 2. CPO, a wonderfully adventurous label that has been spotty in producing SACD’s, chose to release this in the hi-rez format and for that I am grateful.

Listening through this set (the stereo SACD tracks) prompted me to go back to the Musica Sveciae RBCD’s to refresh my memory of its performances and sound. The Oslo Quartet performances for CPO are every bit as good as those earlier recordings and in some ways superior. The Oslo’s exhibit more dynamic contrast in their playing and they also linger a bit longer in some of the slower passages, bringing out more emotion. Hearing the Musica Sveciae recordings for the first time in a while shows their inherent weaknesses – despite being “AAD” recordings, the old RBCD 16/44 digititus seems more prevalent than usual making the violins sound a bit edgy compared to the more natural tonality on the CPO set. Most of the Musica Sveciae set were recorded in a church (like the CPO set) although they don’t allow the church resonance to overwhelm the direct sound as sometimes happens in the CPO set.

I have two complaints to lodge about this CPO set. The first is sonic and concerns the decision to record in a church with a bloomy resonance that makes it difficult to find the right playback volume to achieve a natural perspective. The microphones are obviously close to the ensemble since breath intakes and exhalations are audible from the players yet the resonance makes it seem like we are sitting at a decent distance from the players. This creates a slightly jarring aural picture – both close in and far away at the same time – making it hard to find an appropriate playback volume. That issue aside, the rest of the recording is quite fine in that it captures the full frequency range of the instruments coupled with natural timbres and very good dynamics.

The second complaint? Why oh why did they not include the first two quartets in this set? This would have been a world-beater had it been COMPLETE (they could have even added the unpublished f minor quartet that came between numbers 2 and 3 – as far as I know this has never been recorded). Perhaps the first two quartets will follow – I hope so. Recommended.