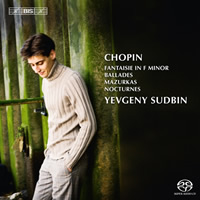 
Chopin’s music presents us with a strange paradox' writes Yevgeny Sudbin in his liner notes to this recording. In Sudbin’s own experience, the music’s direct emotional appeal makes it instantly accessible to most listeners, but to the interpreter ‘it becomes a tough balancing act: on the one side, naïvety and blandness threaten, while, on the other side, a laboured and contrived approach could potentially damage the music'.

Sudbin's own approach has been influenced by Chopin's own words regarding interpretation: 'Simplicity is the highest goal, achievable when you have overcome all difficulties.' But, as he recounts, he is also fascinated by historic recordings by legends such as Ignaz Friedman and Benno Moiseiwitch – performances which have made an impact on him on account of the highly personal playing: 'the beguiling rhythmic swings, freedom in phrasing, articulation that tickles you all over…' Sudbin opens his own Chopin recital with the expansive Fantaisie in F minor – sometimes described as the composer's 'grandest work' – continuing with a selection of pieces from three genres that are strongly associated with Chopin: Mazurkas, Nocturnes and the Ballades Nos 3 and 4.

Following the 2005 release of his second disc, Piano Magazine described Yevgeny Sudbin in lyrical terms as 'a fearless technician with an all-encompassing command of his instrument; a musical dramatist of exceptional acumen and sophistication; a poet who moves seamlessly between unbridled rhetoric and extreme intimacy; a stylist who catches the particular spirit of everything he plays' – all qualities which would seem to be conducive to a memorable Chopin recital, and which Sudbin certainly brings to the fore in the encore À la minute, his own paraphrase on the composer's 'Minute Waltz'.

Yevgeny Sudbin, BIS' young Russian pianist, turns to Chopin, in what may be a contentious recording for those who have strong pre-conceptions about how the composer's music should be played. A good start, therefore, is to read the extensive booklet first, for Sudbin himself has agonised about the issue. He learned his Chopin as an innocent youngster and is now re-thinking the music as a maturing virtuoso. Sudbin's booklet essay, titled aptly "In search of the 'perfect' Chopin interpretation...", casts fascinating and eloquent insight into his experiences and studies on the subject, and is the key to the present disc.

Lamenting the comparative lack of reliable, non-contradictory evidence about Chopin's own performances, Sudbin turned first to the very early recordings, particularly those of Polish-born Ignaz Friedman. He tells us that hearing how Friedman played a mazurka "opened a door to a whole new world" for him. "The approach was in such stark contrast to everything I had heard or learned previously; there was so much personality in the playing, with beguiling rhythmic swings, incredible freedom in phrasing, delicate voicing, a rubato that is more paralysing than an epidural, and articulation that tickles you all over".

Chopin's scores themselves tell us of his flexibility in regard to performance of many of his pieces, for he often prepared several different versions, some quite radically altered, giving edition editors and pianists a real headache. Which one to play? The answer Chopin would probably have given is any or all, depending on mood. Thankfully, the clouding myths about the composer as a "pale, sickly man" (as Sudbin puts it), are beginning to be dispelled, although there are still those who claim that his music should not be played above mezzopiano. This silly notion is clearly dispelled by viewing the scores of the Ballades, Fantasie in F minor and many other pieces which have clearly-written wide dynamic ranges. Even some of the Nocturnes have powerful 'sturm und drang' sections, as illustrated on this disc.

On his search for the (unattainable) 'perfect' Chopin performances, Sudbin of course does not follow Friedeman and other contemporary artists in altering the scores with double octaves, changing dynamics or other such tinkerings from an earlier age; he goes back to the new Urtext editions (which he describes as being skeletons awaiting an interpreters characterisation). What emerges are performances which are at once sensitive and poetic, vivid and bold; above all they show a devotion to the composer and sheer joy in playing his music for us. In his booklet notes he tells us that this disc presents a "snapshot of Chopin's mastery of different genres", and writes about the origins and development of the featured Nocturnes, Mazurkas and Ballades as a basis for their interpretation.

He begins the recital with a late masterpiece, the Fantasie in F minor, which has incomprehensibly become rare in recitals and recordings. In this piece, Chopin experimented with unusual harmonic progressions, creating a work of heady Romanticism which Sudbin relishes. From its mysterious dotted-rhythm march, passionate and turbulent faster sections, through the dream-like Lento episode in the distant key of B major and the virtuoso flurries which precede a moment of exquisite reflection before its serene close in A flat major, this gravely beautiful work is given a tremendous sweep.

Chopin's Nocturnes were developed from the original rather pallid character pieces called nocturnes, 17 or so of which were written and played in Russia by Irish pianist John Field. They used rather banal tunes in the style of Italian operatic arias and French chansons of the period. From them, Chopin devised works of great power, like miniature opera scenes, rather than the wistful, slow themes which their title suggests.

Sudbin programmes three canonical Nocturnes. Op. 27,1 in C sharp minor is portrayed as very much an object of Night, with its widely-spread left hand arpeggios supporting a truly sotto voce melody in the RH. After a disturbed and foreboding piu mosso brings a sense of alarm, tension is resolved by a shift into the major to the strains of a polonaise before a cadenza brings back the atmospheric opening. How lovely to hear the fading harmonics of the final chords held for as long as Chopin indicated, with the sustaining pedal on. In contrast, the Nocturne in C minor, Op. 48,1 - marked 'con molto sentimento' is made stately in its patrician grief by Sudbin, with reposeful calm in its middle section in the richness of an E flat major chorale. The return is built up with a kind of stormy grandiosity, and the first theme now floats agitatedly with perfect operatic effect. An antidote to the darker world of the preceding minor key Nocturnes is revealed in Op.55, 3 (the penultimate Chopin track) in a rhapsodic interplay of many colourful inner melodies, as near to polyphony as Chopin ever got. Some might hear a precursor of Rachmaninov's pianistic style here.

The Mazurka was a form appropriated from the Central Polish 'mazurek', 'kuawiak' and fast 'obertas', triple-time country dances with fast and slow versions, intensively developed by Chopin throughout his life. No other genres had such persistent appeal for him, and he made a point of appropriating the basic dance melodic patterns and using one or a blend of their rhythmic patterns, which included accents on the second or last beats and/or a slight pause before the last beat. The real dances were not made to be poetic, but Chopin made them so. His soulful creations are fleeting impressions, not copies, of the dances, as Chopin applies imaginative rhythmic, dynamic and melodic effects with great subtlety - indications for an accented last beat are very sparingly indicated, for example, although some pianists have been told to put them in every bar. The interpretation and pianistic characterisation of these pieces thus remains controversial; one reviewer from a certain magazine once rashly opined that only native-born Poles could play them properly!

Sudbin treats his selected five Mazurkas as the poetic miniatures they are, finding wistfulness, nostalgia, poignancy, brilliance and cheeky humour in them, just as did Friedman, Moiseiwitch and Leschtitzky. His rubato is measured and carefully applied, and to my ears these lovely interpretations are less mannered than, say, the readings of the same pieces which Perahia included in his volume of the Ballades.

Turning to Sudbin's selection of Ballades, he avoids the first two, which have become very popular and often aired, for the last two. As in the F minor Fantasie, he shows great skill in revealing the underlying structure of these large-scale works. There is no doubt about the high status of the Ballades, and the F minor Ballade Op. 52 has very slowly gained a reputation as one of Chopin's peerless masterpieces, so in his high-voltage reading it makes a most satisfying climactic conclusion for his recital. Except it isn't! On an extra track, Sudbin relaxes and plays a pastiche based on Chopin's Waltz in D flat Op. 64,1, portraying what some of his heroes including Rachmaninov might have done with it. He manages almost to outdo Godowsky and even Hamelin with sheer glitter and élan, a most enjoyable encore.

Given a sumptuous, sonorous capture of a very well-prepared Steinway D in an ideal acoustic, this disc is a very fine start to Sudbin's self-imposed search for the 'perfect' Chopin performance. Having struggled to play many of these pieces for much of my own life (as a mere amateur), this recording is hugely entertaining, revealing and thought-provoking. Not for the faint-hearted collector or listeners with deeply embedded preconceptions, it will no doubt be followed by other performances as Sudbin's artistry develops. I hope he will look back on it with at least some pride. For the rest of us, we can but listen and marvel. 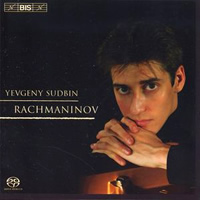 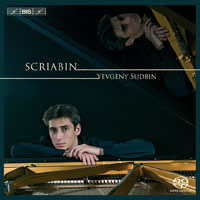 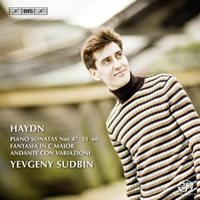 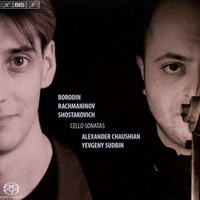 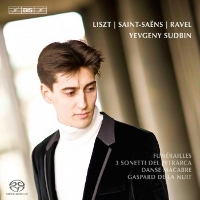 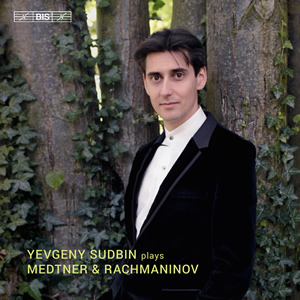 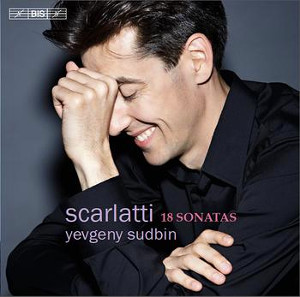