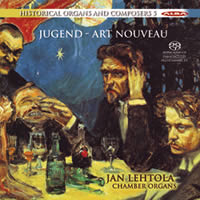 Alba's striking cover has a cartoon by Swedish artist and want-to-be Finnish Alsele Gallén-Kallila. Staring at us from left to right are the scowling, raddled faces of Gallén-Kallila himself, composer Oskar Merikanto, composer-conductor Robert Kajanus and composer Jean Sibelius. These students met up in their study visits to Berlin, Vienna and Paris during the decades before and after 1900. According to Sibelius, more to take part in late-night "Drinking Symposiums" than to study a revolutionary period of the fashionable new philosophy of art, variously termed Art Nouveau or Jugendstil.

This album is the third in Alba's excellent series "Historical Organs and Composers" and visits Chamber Organs of Finland. It is a lavish publication indeed, with fine recordings of 28 pieces played by Jan Lehtola (in the top echelon of Finnish organists) on four well-preserved chamber organs from the Art Nouveau period. Support for the album, in a substantial slip-cover, comes in a glossy-paged booklet of 49 pages (English and Finnish) with an outline of the history of organ-building in Finland by Lehtola, relating how the Art Nouveau permeated the buildings housing organs (not always churches), the design of the organs and the music played on those organs. Most of the booklet is used for descriptions of each organ and their histories, and the rest for the music and composers featured. The SA-CD case has a folded card with five panels of splendid coloured photographs showing each organ and its environs; one of the three programme lists is on the final panel.

In general terms, some 40 organs were built in Finland before the year 1700. Most, however, were destroyed during the period of Russian occupation (1714-21). New organs were built and old ones repaired after a war, and by 1809, when Finland became a Grand Duchy in the Russian Empire, there were again over 30 organs in the land, mostly in churches. After Finland's Declaration of Independence in 1917, organ building proceeded apace, and a Golden Age began for organs, inspired by the Art Nouveau movement. By the turn of the 20th Century there were over 400 organs in the country.

Chamber Organs in the past were common musical instruments in large, wealthy Baroque houses, opera theatres, church chapels or used as choir organs for rehearsals. But by the turn of the C19th, they were much in demand for rich person's homes as well as small concert halls or public institutes. With regard to the Chamber Organs on this disc, two were originally intended for artist's studios, one for the assembly hall of a vocational school and one for the final chapel of a business tycoon. They are major historical-cultural examples of the Golden Age of Finnish Organ building, featuring products of the Kangasala Organ Company in the 1920s-30s. Except for the organ at the Kymi Ceremonial Hall, which is rather plain in design, the Visavuori, Kalea and the Amos Anderson Art Museum organs have elegant cases, my favourite being at the Museum. Its pipe case above the console has a pair of wooden doors which open to display paintings of characteristic Romantic Art Nouveau half-clothed nymphs hearing and playing music.

The organs are all Late Romantic in their basic register dispositions, often with a few Romantic registers. Since they reside in what would be an impossibly restricted space for full development of sound in their respective acoustics, there are some oddities in speaking. The lack of reverberation to help sustain patterns of notes sometimes produces a dry, over-articulated sound (for example in the chord sequences in Sibelius' Intrada Op. 111a). The Kymi organ's reeds in this piece also sound a little wheezy; the 16' pedals don't have much impact, probably due to the room's lack of support for such fundamentals, and here, as well as on some of the other organs, the necessary closeness of the sound makes dynamic changes using the Swell doors take place unexpectantly rapidly and sometimes startles, disrupting a melodic line somewhat. More gradual dynamic changes by build up of successively louder stops on an organ well-appointed with large disposition numbers is not possible with the limited choice of stops these chamber organs have.

Such differences to full organ sound are somewhat unsettling at first hearing, but soon the ear adjusts, thanks to the skills of engineer Mika Kouivusalo and the dedicated playing by Lehtola. The recording, particularly in multichannel 5.0, sensitively captures whatever ambient environment is present for each organ, and maintains it between tracks, so that switching from organ to organ, if you have good ears, shows their difference in response. If you have very good ears, or have been playing at a high volume, you might hear some distant dogs at one of the locations!

Another characteristic feature of chamber organs is that they produce various amounts of working noises, some intriguing ones of which I have never heard before, together with some soft hiss or LF from blowers. These are clearly depicted in Kouivusalo's recordings, some even emanating from a rear channel. I never found them distracting to the music; rather that they could be enjoyed as distinct and intimate characteristics of these characterful little organs.

Lehtola started out his choice of music for these organs with the aim of proving that "Jugendstil" is reflected in music for the organ. His choices are of Late Romantics such as Toivo Kuula, Sulo Salinen, Selim Palmgren, and Oskar Merikanto, all working in the Art Nouveau scene. None of these short pieces are deeply emotional, but they are certainly homely, elegant, lyrical and digestible. Salonen's Partita is mingled Bach with Romanticism; it's subtitle is "The Loveliness of the Summer". Merikanto's collection of 100 Chorale Preludes is really a set of Romantic cameos. So it seems that Lehtola has made his point.

I was surprised to find that Lehtola ha also included Sibelius' organ music (only found in Ms and published in 2000), spreading the pieces between three organs (Intrada, Op.111a, Funeral Music Op. 111b, Impromptu Op. 5 (MS), Preludium and Postludium (MSS). Usually these have been recorded by full organ (e.g. Sibelius: Complete Organ Works - Kiviniemi), but Lehtola noted that in their original form they lacked pedal parts, thus hinting possible use on a chamber organ. However, the Intrada was composed for the visit of the Swedish Royal couple to Finland in Helsinki's Nicolas Church. In full organ it is thunderous, majestic and awe-inspiring, with the later version's double pedalling, and runs rings around the Kymi organ's effort, although Lehtola does, towards the end, express joyfulness. The Funeral Music, however, was Sibelius' lament for his friend Gallén-Kallila, and it sits well on the Artist's Kalela home organ, with Lehtola in the intimacy of an almost closed acoustic, pacing rhythmic time changes from 3/4 to 2/4 then 9/8 with an air of strangeness, uncertainty and anguish, draped in modal, dissonant and chromatic harmonies. Elements of Sibelius' destroyed Eighth Symphony?

Two most interesting tracks are his Lehtola's own Improvisations, Hommage à Sibelius I (Kymi organ) and Hommage à Sibelius II, the latter on the Kalea organ and a very pleasant surprise, as it recalls a time when Sibelius was improvising and came up with the tune for his Second Symphony. Lehtola's mastery of the available stops on this little organ makes it almost sound orchestral!

Despite my initial disappointment with Chamber Organ sound, I have greatly enjoyed this luxuriously presented history of Finland's versions of these instruments, with Lehtola and Koivusalo revealing the little instrument's respective personalities so well. My only caveat is that this album is not really for the general listener to organ music, but for those deeply interested in organs and their histories - or those willing to further explore their experience of Finnish organs. 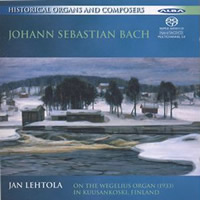 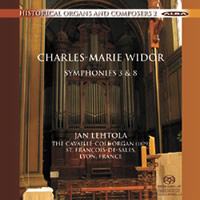 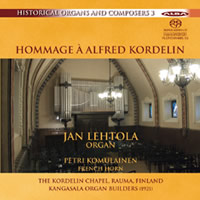 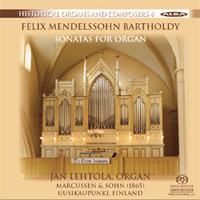