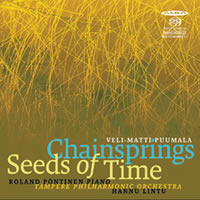 Listening to the first few minutes of Puumala's Chainsprings from 1995/1997 clearly put it into the avant-garde category, that catch-all term for post-1945 modernism. Personally, I usually have found this fragmented scatter of sounds, often over-blown or otherwise distorted, to be hard work to listen to, and never felt the urge to repeat one hearing. The ultimate experience was when I was sitting in a concert's front row, just feet away from the principal cellist of a famous orchestra (whose name I shall not reveal). The alleged music was a new commission from a young composer, who was seated in the balcony for its première. After a seemingly endless time for my wishing it would stop (echoing a Viennese critic's vocal cry during a Beethoven symphony), I saw the principal lay down his bow and cello, then to drag a galvanised bucket into the cello's place between his legs. Then he produced a length of black hose pipe, dipped one end into what must have been water in the bucket, and at a gesture from the conductor, blew into the hose for about 15 seconds. Other noises were been let off at the time elsewhere in the orchestra, so only I and the few listeners close by could hear the bubbling of the water. During his solo, our gazes met for a moment, and we mentally shared our opinions of the Dadaistic brand of avant-garde.

I therefore began listening to Chainsprings with some trepidation. But during its progress, I warmed to it as music rather than merely a chaos of cerebral noise-making with sophisticated instruments. Puumala doesn't take himself as seriously as did most of his august predecessors from the post-serial schools, but manages to convey both humour and his joy in experimenting with orchestral sound (not that this kind of music manages to sound happy, although he writes some prodigious raspberries for the brass, which would make anyone laugh).

Born in 1965, Veli-Matti Puumala has become a very significant element of the Finnish music scene, and since 2005 has been Professor of Composition at the esteemed Sibelius Academy. This disk is the première recording of Chainsprings, one of several Puumala compositions with Chain in their name. The composer sees Chainsprings as "a sort of tribute to the musical thinking of Lutoslowski" in that his music also grows out of fragments which move towards longer time spans, from splinters to a complete picture.

This piece, lasting 25 minutes, works on three planes: it is a set of 13 variations (on a theme not disclosed); it is divided into four 'Quadros' (Italian for "pictures") and thirdly it is divided by recurring Exposiziones, Cadenzas, Intermezzi and Spazios (spaces). The orchestra also assumes a wealth of guises or musical landscapes, which are juxtaposed and include Balkan folk music, French spectral music, Finnish orchestral pieces, Italian virtuosity and Indonesian gamelan music. In other words, Chainsprings is a sonic collage with several overlapping and superimposed structural elements. I suggest it to be as difficult for the average listener to perceive such complex structure as to play three-dimensional chess blindfolded.

At the beginning of Chainsprings, the splinters are immediately obvious, with solo instruments or groups playing isolated notes or very short mottos which are tossed around the orchestra, forming a kaleidoscope of sound colours, very much in the style of some members of the Second Viennese School. Fragments of ghostly jazz also flit by, and a Steve Reich parody occurs several times. One cadenza is allocated to the extensive percussion group (wonderful sonics here) and it passes into a gamelan sequence. Another brief cadenza is allocated to the bass woodwind. Gradually the music begins to cohere into longer and more Romantic sounding sequences, led by violins above deep bass pedal notes, and this at times has a solemn majesty about it. There is indeed a resolution of a sort.

A major feature of this recording of Chainsprings is that the engineers place us inside the orchestra, with instruments popping up all around us. This is the ideal sort of material for true surround sound, and the clarity of recording and maintenance of a believable perspective in the large Tampere hall gives superb results. Listening to the piece in this way makes it much more involving than a plain concert layout.

Seeds of Time (2005) is a piano concerto commissioned by four orchestras, one each from Finland, Denmark, Sweden and Norway. It was written for the Swedish pianist Roland Pöntinen and conductors Hannu Lintu and Susanna Mälkki. Puumala unconventionally arranges his orchestra into seven groups: a chamber orchestra, double septet, triple trio, various string groups, a string quartet, duos and various section soloists, including clarinet. bass clarinet, trumpet, timpani and violin. As with Chainsprings, there is a complex structural concept. It involves a musical element which Puumala calls a window, and this represents "a static image like a window pane through which it is possible to peer into a different time that does not move". Much of the piece is concerned with depicting different aspects of time, which are often interrupted and contrasted with the 'windows', and it opens with a window. I wondered if reading "A Brief History of Time" again might help understanding all this abstractism.

The other significant structural element is a three movement division, each movement given an Italian title. These are also associated with different times of day; the first and second being daytime music, the third nocturnal. Various shards and snapshot phrases of music such as jazzy notes from the '50s or the solo violin's Romantic reconstructions comprise "seeds of time", which grow and interact in each movement, the first of which is called Turba ("crowd" or "disturbance"). Premura (haste) is the second movement's title, and its music becomes a study of various hurried movements backwards and forwards, interrupted by windows. The repetitive piano part here represents Time which can go forwards or backwards (one wonders at this point if quantum entanglement is involved!) and the piano gathers various solos from different parts of the orchestra, their heterogeneous sounds each seeming to inhabit a different time (so the booklet notes insist). At this point, I found it best not to involve myself at all with what the intent of the composer (allegedly) was, but just to listen to, and ultimately enjoy, the music itself.

Transition to the nocturnal third movement, Tra le Braccia della Notte (The arms of the Night) is quite obvious, as it is slow and lyrically atmospheric, with a singing clarinet, comments from a trumpet and a piano texture which recalls a lullaby, Renaissance singing and Medieval organum. Time seems to congeal and seemingly stop entirely as the cadenza approaches, contrasting with the busy world of our present. Messiaen-like bird calls have a calming effect, but soon the instrumental cadenza interrupts boisterously. However, calm is restored and finally the percussion group, as if retreating, "enfolds the music in the timeless veil of the night" as the insert notes put it.

Pontinen, a brilliant pianist with a formidable repertoire, gives a fearless performance of this concerto in which often the pianist is not at all the centre of attention. Here, as in Chainsprings, the Tampere Philharmonic players are also simply dazzling in negotiating not just the often seemingly chaotic process of Puumala's music, but also his demands on producing unusual sounds from their instruments. Hannu Lintu's acutely perceptive direction in these difficult pieces would be hard to supersede, and these première performances will surely remain as touchstones in the future. Similar praise must go to the engineers, who have produced a recording of great clarity and presence, which shows off the detailed timbral qualities of each instrument and handles a wide dynamic range with aplomb. The 5.1 track is best; not only for the surround immersion of Chainsprings, but the more usual concert-hall perspective for Seeds of Time.

Documentation is quite good, in English and Finnish, with brave attempts to explain the composer's comments on his creations (eclectic as usual) but in a minute font, difficult to read for many, which brings the booklet down to a mere 7 pages, including some photos. More seriously, inexplicably there are no subsidiary tracks for the two pieces, which last 25'02 and 39'10 respectively. There is no way to jump to movements or other structural elements, which may bother those who wish to study these pieces (like a reviewer).

If your musical tastes must involve tunes, then don't bother with this disc. But if you are more adventurous, and also interested in some contemporary music which is a number of degrees higher in audience-friendliness than usual, I urge you to try it. I did and my usual rejection of much avant-garde music was appeased so much that I have played Chainspring and Seeds of Time several times, with increasing enjoyment - aided by the vibrant sonic characteristics of Alba's disc which is almost worth acquiring for its quality sound alone.