This is a surround delight. Just seen this for £0.98p + postage on Amazon marketplace. If you have a surround system then do yourself a favour. 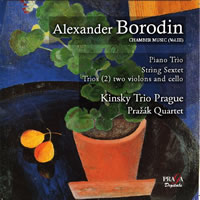 
The young Kinsky Trio continues the tradition of the Czech chamber school: that of the Suk and Guarneri Trios as much as that of the famous quartets: the Vlach and Smetana yesterday, today the Zemlinsky... and Prazak. Under the leadership of Pavel Hula, of the latter, their sins of youth again reveal their spontaneity and native Russian lyricism, souvenirs of afternoons of chamber music in which Borodin, an amateur cellist, participated in Saint Petersburg and Europe.

After having cheated about the recorded sound in the second volume of Borodin’s chamber music, I awaited Praga's third volume with mixed feelings. As it turned out, unnecessarily so. This time the recording is in SACD Multi-Channel. There is no information about where and when the recording took place, but by the sound of it, I assume that the DSD format is equally correct. Praga Digitals / Harmonia Mundi have rehabilitated themselves with this issue. The interest of the disk lies in ‘rounding-up’ what’s left of the chamber music that Borodin composed in part, or left behind unfinished. During his life only a few, and hitherto most appreciated works, came to a successful end: two string quartets, some ‘melodies’ a symphonic poem (in the Steppes of Central Asia) and two symphonies. Even his famous opera ‘Prince Igor’ had to be completed after his death (by Glazunov). It should also be noted that Borodin was a part-time composer. He did it for pleasure or, as some said: he was a ‘Sunday Composer’. There was no need to make a living out of it. He held a full time position as professor at the Military Academy in Petersburg. This said, we are left with the question: did he leave these chamber works unfinished because he was not satisfied with them or because he could not find the time (and may be the patience) to complete them. Could be both, but I do not dispose of the material to substantiate this one way or the other. However, thanks to Praga Digitals, the Kinsky Trio and the Prazak’s, we, the listeners, will now be able to judge the quality for ourselves. The liner notes give a lot of insight under which circumstances the compositions were brought about. As far as I am concerned, none of the works on this third volume have the depth, the maturity and the melodic charm of his two string quartets. But they should by no means be brushed aside as mere ‘Sunday stuff’. Being an autodidact, Borodin taught himself to play the flute and he became a successful cellist as well. He started composing at the age of 13 and all the works on this disk stem from the period before joining the famous Russian ‘Group of Five’. They are largely inspired by Russian folk music and have the charm of unpretentious and melodious joy. We hear some Mendelssohn and some Schumann, but all of it is firmly rooted in the Russian tradition. The Kinsky’s and the Prazak’s guarantee first class performances, the recording is good, so why not try and judge for yourself. You can hardly go wrong. The pieces are obviously not all of the same quality, but I have drawn an immense pleasure from listening to them.

This is ultimately a frustrating SACD, not because of the performances (they are quite fine) nor for the sonics (they, too, are generally fine) but for the unfulfilled promise of the music. It consists of mostly unfinished pieces by Borodin – a piano trio missing a final movement, two movements of a string sextet and two string trios, the first (in G minor) consisting of just a single movement and the second (in G major) having two movements. The best work on the disc comes last of all – the two minute Serenata Alla Spagnola for string quartet which was the first movement of a group quartet with the other movements by Rimsky-Korsakov, Liadov and Glazunov (unfortunately, these movements are not recorded here). Alas, two minutes of great music is not enough to rescue this.

The unfinished Piano Trio in D (22 minutes in this performance) is a good work, reminding me of Dvorak in many ways. No one knows why Borodin never got around to adding a finale which is too bad because the work could sustain another 6-8 minutes of compelling music to bring it to a close. The Kinsky Trio play it very well.

The unfinished String Sextet in D minor (8 minutes here) consists of two movements – an opening allegro followed by a brief andante. This is a pleasant work that might have been better had the composer continued writing. As it is, it just feels incomplete and unsatisfying. The two String Trios are likewise unsatisfying as compositions due to lack of an overarching movement structure and mundane musical material.

The piano trio was recorded in Martinu Hall in April, 2011 by the usual Praga recording team and possesses the best sound on this SACD – full-bodied, wide ranging and natural with a wonderful balance of direct and hall sound. The rest of the disc was recorded in May, 2011 in the Domovina Studios. Here, the sound is just a bit veiled and top heavy and the resonance sounds artificial to me. It’s not bad sound by any means but not up the highest standards for chamber music recordings. I rate the trio at 4.5 stars, the rest at 3.5 stars for 4.0 overall. I think a better strategy for Praga would have been to include these various bits and pieces on other releases with completed chamber works of Borodin. That way, one is not left with a complete disk of odds and ends like this one. I find it hard to muster much enthusiasm for this SACD. 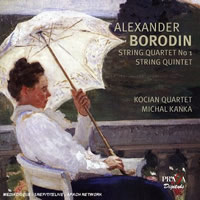 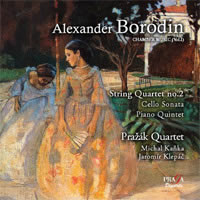