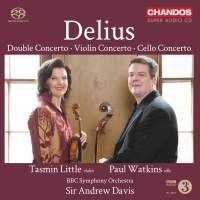 
These three major concertos by Frederick Delius involving solo string instruments are here brought together on the same disc for the first time. The Violin Concerto, Double Concerto, and Cello Concerto are performed by exclusive Chandos artists strongly associated with British repertoire.

Sir Andrew Davis and the BBC Symphony Orchestra have already released one Delius disc this year (CHSA 5088 – Appalachia and The Song of the High Hills), of which International Record Review (IRR) wrote: ‘I am absolutely certain that this is the greatest performance and recording of Delius’ Appalachia which has ever been put on disc… it would be hard if not impossible to imagine a more magnificent performance of this masterpiece… the playing is unfailingly beautiful and infused with sensitivity, brilliance of technique and vividness of colour.’

Tasmin Little, who won the Critics’ Choice Award at this year’s Classic BRIT Awards, is the soloist in the Violin Concerto. This is not a virtuosic showpiece in the ordinary sense; instead, the solo part stays harmonically connected with the orchestra throughout; in fact, it seems to grow out of its textures. The work is composed in a single long span, divided into three clear sections in which different moods succeed one another, sometimes passionately spontaneous, sometimes dreamlike, sometimes fiery.

Paul Watkins is the soloist in the Cello Concerto, which Delius regarded as his personal favourite among his concertos. It was the last work that he was able to complete in his own hand before experiencing the onset of the devastating effects of syphilis: paralysis and blindness.

Tasmin Little and Paul Watkins join forces in the rarely performed and recorded Double Concerto, which represents Delius at his most inspired: the work is warmly evocative as well as strong and memorable. The soloists get to showcase their abilities in music that is both passionate and tranquil.

May be due to stiff competition I was less enthusiastic about Tasmin Little’s performance in Elgar’s Violin Concerto than many others were. But this time I cannot but express my greatest admiration for her sensitive playing in Delius' Violin Concerto. In fact the whole disk is 'une merveille': Programme, soloists, orchestra, conductor and, last but not least, the typical Chandos sound.

Delius’ background is not as British as one would think. Of German descent, he has spent a large part of his life in France. ‘External’ influences are noticeable, though more German than French, as he did not mingle much with the French musical world. Yet, most listeners are convinced that his music is firmly rooted in the Anglo-Saxon tradition and that, in order to flourish and bring out the beauty, performances are best served by ‘native’ English interpreters.

This may largely be the result of the admiration of the late Sir Thomas Beecham for the compositions of Delius and his continued efforts to bring these to the attention of British audiences. Delius’ markings like ‘rather quiet, ‘rather quicker’ etc. have a typically British flavour, too, and it would seem that you have to be born and grown into understanding this kind of lyrical country style inspired music to recreate what seems to have been meant by him.

On my side of the Channel, British music does not enjoy the same popularity as it does ‘over there’. With this disk, however, Chandos makes a most convincing statement. In the hands of the chosen performers, Delius becomes so much more than ‘On Hearing the First Cuckoo in Spring’.

We have here the three major solo works for strings (excluding the Caprice and Elegy, for Cello and Orchestra and the Suite for Violin and Orchestra): The seldom played double concerto, the better known violin concerto and, finally, his melodious Cello Concerto.

Tasmin Little and Paul Watkins are a perfect team in the Double Concerto and the latter excels in the Cello Concerto, turning it into a most memorable experience. Together with Tasmin Little's aforementioned playing in the Violin Concerto, nothing but praise, therefore, and that includes Andrew Litton and his musicians.

Those who are not familiar with Delius’ larger compositions can’t do better than buying this disk and enjoy it as much as I did. 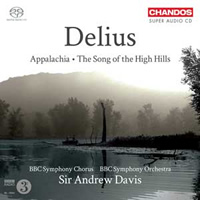 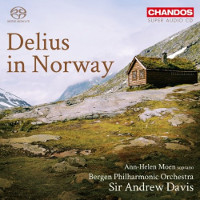