Mine finally arrived and am still digesting it (not literally !!!) both as a performance and recording. Expected to be bowled over but will wait and see! 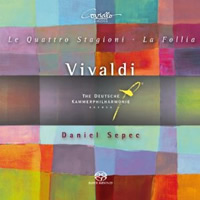 
Following on from his previous year’s success with the prize-winning recording of Biber’s Rosary Sonatas (e.g. German Record Critics Award), Daniel Sepec now turns his hand to one of the small number of Baroque works to have made it into popular repertoire. Vivaldi expressed the intentions of his famous concertos “The Four Seasons” in a series of sonnets. Daniel Sepec declares his intention of returning to the roots of these compositions accompanied by Germany’s leading chamber orchestra Deutsche Kammerphilharmonie Bremen: Our aim is to tell a story. On first sight, the text of the underlying sonnets appears somewhat naive, but through the music, musicians and listeners are able to immerse themselves in the images on a profound emotional level and bring them to life. I had clear-cut musical ideas for certain images, for example through the inclusion of the harp alongside harpsichord and lute in the slow movement of Autumn: this achieved the vague and obscure sound that I had always had in mind for the drunken villagers lying on the ground. The focus of our approach is thus on a narrative level, built on the foundations of our knowledge of historical performance practice.

In this recording, Sepec and his colleague Florian Donderer have also committed a veritable folly – at least according to the title of Vivaldi’s Sonata “La Follia“. Sepec considers it essential that this folly should be reflected in the performance of this work: We emphasized the title of this sonata (follia means "madness") through our choice of ensemble. We have supplemented the original trio sonata instrumentation with guitar/lute and percussion (castanets, several drums, etc.) in the continuo group. Our actual intention is to create a wild and emotional atmosphere in a dance intensifying to a state of ecstasy towards its culmination.