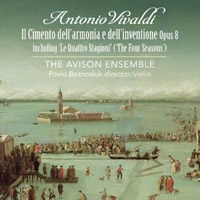 
Vivaldi: Concerti Opus 8 is the anticipated second recording in The Avison Ensemble's Baroque series, which includes the complete recording of Antonio Vivaldi's virtuosic violin concertos by the outstanding period instrument orchestra. Directed by Pavlo Beznosiuk, Britain's foremost Baroque violin virtuosi, the ensemble presents an insightful performance of the masterpiece that is brimming with energy.

Vivaldi's Concerti Opus 8 includes 'The Four Seasons' which is, without a doubt, Vivaldi's best-known work. Each of the twelve concertos is extremely demanding and Beznosiuk's virtuosity permeates throughout each performance. The thematic elements within each innovative work results in a collection that is colourful, fresh and emotionally charged. Opus 8 is a true testament of Vivaldi's ability for invention and variation.

Vivaldi's collection of violin concertos entitled "The Trial of Harmony and of Invention" Op. 8, is not so often recorded despite it including "The Four Seasons", probably the best known classical music in the world. The "Seasons" have taken on a life of their own, being used for ring tones, advertisement music, jazz versions and in classical recordings of every kind, whether on period or modern instruments and having size of ensembles from one-to-a-part to the whole string section of the Berlin Philharmonic. Yet new ones still come forth, even though they have to survive in an extremely competitive market. Pity the poor person who is trying to locate the best version to buy for their first purchase. Pity also the poor reviewer, who faces an impossible task of comparing chalk and cheese to the nth degree. It all comes down to personal preference, of course.

The Avison Ensemble has two useful marketing angles in its favour; it contains all 12 violin concertos of "Il Cimento dell'armonia e dell'inventione", and the two Hybrid discs are at a 2 disc-for-1 price. Pavlo Beznosiuk, the director and soloist for the Avison Ensemble has impeccable qualifications for his job as a period instrument violin soloist. The Ensemble itself is based in the north-east of England, and takes its name from Charles Avison, a local composer who wrote many excellent sets of concertos himself. The disc's booklet rather shoots itself in the foot by telling us that when copies of Vivaldi's Op.8 arrived on Avison's desk, he was quite unimpressed with the work (although in his own later concertos there are signs that he had adopted some of Vivaldi's effects).

While scholars still remain locked in disagreement about the "normal" size for playing concerti in the Baroque, the Avison fields up to 15 players (including Beznosiuk) Apart from his solo violin, the ripieno group consists of 4 firsts and 4 second violins, a viola, two cellos, one bass and two continuo players, whose instruments include archlute, baroque guitar, harpsichord and box organ. This size of group might be found in a pretty well-to-do institution or household. Instruments are of period type or replicas thereof.

Taking The Four Seasons first, it is immediately clear that that the Ensemble has an excellent grasp of Baroque playing practise. Their tempi are in line with the speeds of 'Allegro' other terms generally used in Vivald's time; there are no frenzied or hyper-aggressive movements, and the various effects such as winds, storms, animal and bird noises which Vivaldi's programmatic texts abound with are produced naturally and musically, rather than the shock and awe tactics employed on some recordings to gain kudos.

I did notice that Beznosiuk does take more notice of Vivaldi's detailed instructions in the score than some. For example in the Largo of "Spring", the soloist portrays a goatherd soundly asleep, while the viola emulates a barking dog, obviously warning of a carnivorous attack on the herd, as Vivaldi has a note saying that the viola must play insistently "molto forte e strappato" (very loud and snatched). The joke is that the goatherd is probably too drunk to hear the insistent dog's warnings. Only Fabio Biondi follows the instructions to the letter; many others prefer to keep the dog very much quieter. To their credit, the Avison go a little more than half way, and we certainly notice the dog barking.

In short, the Avison's whole approach to the programmatic elements is thoroughly musical, and all the better for that. Beznosiuk selflessly does not involve himself in the "Virtuoso" style which Vivaldi himself reportedly had, declining tp add florid ornamentations on the wing as does the passionate Carmignola. Instead, this is rather a North European set of "Seasons", rather than one located nearer the Mediterranean. Beznosiuk also keeps the continuo section colourfully varying their instrumentation from piece to piece. While clearly present, the continuo playing is happily trenchant but unfussy.

The other concertos in Op. 8 are mostly up to the same standard; Vivaldi's inventiveness is astonishing, and the non-Seasons really should be better known. Several of them do have names indicating a generalised programme, such as "Tempesta del Mare" (Storm at Sea), "Il Piacere" (The Pleasant) and "La Caccia" (The Hunt), but all of them are lively, colourful and entertainingly tuneful.

Linn's recording, particularly in multichannel, is immediate but not too close, with a solid and deep bass and plenty of instrumental detail. However, I did notice that, as on all my other Linn SACDs, the upper violin sound tends to become glassy if you play at a pretty high volume. Backing off the control a few notches usually removes the problem. For me, the most thrilling Vivaldi sound on SACD comes from Channel Classics' later set of 12 violin concertos with Rachel Podger, "La Stravaganza". The playing of Arte dei Suonatori is also in class of its own in these pieces.

Despite a few minor issues (including my staunch affection for Orbellian's "Seasons", which is full of fun), I think that the Avison's version of "Il Cimento", neatly clad in a triple gate-fold digipac, is a real bargain, and anyone lacking the Op. 8 concerts could well do much worse.