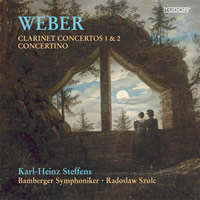 Forsaking his baton that was so ably displayed in Trumpet Concertos - Gábor Tarkövi, Karl-Heinz Steffens takes up his instrument that once occupied a principal position in no less than the Berliner Philharmoniker.

Those familiar with the traditional approach to Weber that his former great orchestra adopts, will not be surprised that Steffens is less speedy on the whole than the exhilarating accounts proffered on Weber: 2 Clarinet Concertos, Clarinet Quintet - Fröst, Kantorow. In spite of audibly larger forces, Radoslaw Szulc manages to spring the rhythms so that no fast movement ever drags in the orchestral tuttis. Sadly Steffens does not always pull off the same feat. To give one example, in the first movement of the F minor concerto (No. 1), the triplet passages often sound flat-footed instead of the natural bounce that Martin Frost imparts. Perhaps, given the overall conception, the slow movements work best with Steffens and Szulc both finding a natural ardour and long line the defies criticism. In the Finale to No. 1, Steffens seems to find Szulc's wavelength and the whole performance catches fire, even though it is a definite Allegretto (Frost could be accused of being a bit over-enthusiastic here!)

In the second concerto, honours are far more divided. Many would feel that Frost's more fleet-footed approach in the opening Allegro is a little too light-weight and doesn't adequately capture the scale of the musical argument as Steffens manages here - he & Szulc are definitely of one mind in this concerto. As before, the slow movement has a natural flow and Szulc's firm and sensitive accompaniment manage to support Steffens almost unnoticed before the recitative section towards the end of the movement; Steffens sotto voce playing is very beautiful indeed. Marked "Alla Polacca", this movement is clearly very taxing for the soloist yet Steffens plays it with grace (although not finding quite the last degree of humour that Frost manages, his is far from po-faced).

To round off the disc comes the Concertino in C-minor/E-flat major (making this disc somewhat shorter measure than the rival BIS account which also manages to include the Clarinet Quintet arranged for string orchestra) and features playing that mirrors the best characteristics that were displayed in the concertos. Throughout this disc, the playing of the Bamberger Symphoniker is exceptional for the size of string section employed - the lightness of touch and sense of bounce in the rhythms is a constant joy to the ear - our thanks must go to them and Szulc as much as Steffens for making this disc so pleasing to the ear. Lastly, the engineering that Tudor lavishes is ideal for the musical conception - bold but not overly resonant with clear placing of all the instruments but lacking that last degree of transparency that some manage with this orchestra.

This is a "traditional" reading of these works, albeit in far superior sound than such a conception has previously been awarded. If one is not insistent on a chamber orchestra accompaniment or the super-virtuoso approach of Frost, newcomers will find this disc largely very satisfying indeed.