Argento: Jonah and the Whale - Clark | David Stanbury - Yesterday 09:13 am 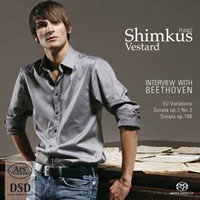 Vestard Shimkus (or Šimkus in Latvian) is the elder brother of Aurelia, who just got a 2016 ECHO Klassik (Germany's major classical music award) for her latest disk: B-A-C-H Ich ruf' zu dir: Liszt / Bach / Bach-Busoni - Shimkus. Talent is clearly all in the family. Here he presents a Beethoven programme, confirming his already widely recognized talent in his home town, Riga, Latvia. His international credentials were established after a successful 2007 début with the BBC Philharmonic Orchestra under the baton of fellow country man, Andris Nelsons, stepping in as a late substitute for the Serbian pianist Aleksandar Madzar. Soon after, Invitations for concerts with i.a. the City of Birmingham Symphony, L’orchestre national de France, the Czech Philharmonic and the Kremerata Baltica followed.

Beethoven is one of his idols. But as a man of his times, this versatile pianist is equally at home with jazz, improvising and quality pop. As a composer he has already written 2 piano concerti and various other compositions, of which talent we get a sample on this disk: ‘EU Variations on a theme of Beethoven’.

Latvia joined the European Union in 2005 and Shimkus’ German editor, Schott, invited him to compose a set of variations on the EU anthem taken from the final movement of Beethoven’s ninth symphony for an event in Wiesbaden, Germany, on condition that it had to be witty and virtuosic. I’m no great fan of incidental music for an ‘event’. But I must say that he, Shimkus, succeeded in concocting something humorous and pianistically demanding, whereby the variations are written in a style of famous composers or taken from well-known songs, depicting the variety of European cultures, including the former Soviet Union (of which Latvia was for some time a part) and even would-be member Turkey.

The real Beethoven comes thereafter: sonata Op. 2 no. 3 and, the longest and most difficult of them all, the ‘Hammerklavier’ sonata Op. 108. I could not believe my ears and had to check with other copies of these sonatas in my library: Such a (relatively) young talent and already so mature in his musical vision. Both sonatas bridge Beethoven’s life from ‘the spirit of youth’ to ‘the old revolutionary’, dixit Tomas Höft in his liner notes. And so it is. And so does Shimkus. His interpretations colour all shades of Beethoven’s life: Powerful, but also playful and uplifting young ‘élan’ alternate with considerate tenderness in the wonderfully crafted adagio in Sonata no. 3; moving to desperate fury, battles with deafness and moments of resignation, so well expressed in the emotionally laden adagio sostenuto in Sonata no. 29. Nowhere hindered by technical barriers, Shimkus covers it all in a way many talents of lesser quality can only dream of. A not to be missed revelation.

For completeness sake I may refer to his other recording with ARS-Produktion: ‘Wagner Idyll’ deals with transcriptions of Wagner operas and, interestingly enough, an early piano composition: Fantasia in F sharp Op. 3: Wagner: Piano Transcriptions - Shimkus

For Hi-Res fans it is unfortunate that Vestard Shimkus has since moved to another label which does not record in high resolution. I, for one, shall miss further recordings of this gifted player as captured in a sound quality that Manfred Schumacher time and again produces at the ARS-Produktion preferred location in the Immanuelskirche in Wuppertal, Germany.

I’ve said it many times: High Resolution recordings, like Super Audio, does not only guarantee the best and most detailed sound, but it also enhances the dynamics, and thus the emotional feeling, which, in Beethoven’s sonatas, is imperative for conveying heart & soul of the piano in its entirety.