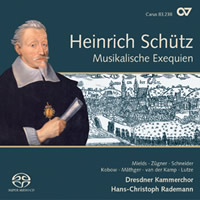 This is the third volume of Carus' complete recordings of Schütz and, like their Mendelssohn choral cycle, this series started out RBCD-only. Like Schütz: Musikalische Exequien, Motets - Homburg, the mainstay of the disc is the Musikalische Exequien (music for the funeral service of Count Heinrich II "Postumus"). Unlike the alternative performance on MDG, this disc is completed with other works by Schütz and these are other works of mourning (including 4 world premiere recordings).

The key attribute that this recording has over the MDG account is Hans-Christoph Rademann's use of a professional choir (his own Dresdner Kammerchor). Their sense of tonality thankfully matches the soloists (Dorothee Mields, Anja Zügner, Alexander Schneider, Jan Kobow, Tobias Mäthger, Harry van der Kamp & Matthias Lutze) and the soloists are pleasingly well blended (when required) whilst retaining their individual character of voice in their solo lines. The continuo of Matthias Müller and Ludger Rémy is pointed to great effect and although Rademann allows a greater amount of space than others, the musical argument and tension is sustained without effort on the part of the listener. The performances of the "less well known" works are delivered with equal assuredness as in the Exequien and are as rewarding to hear, if not more so, as the more familiar work.

The sound, coming from the Stadtkirche "Zum Heiligen Namen Gottes", Radeburg has the appropriate ecclesiastical space reflected and fortunately, this church is not one endowed with an enormous reverberation time or other sonic quirks. It is not perhaps as fine as some that Carus have released but it is far from problematical in any way whatsoever. 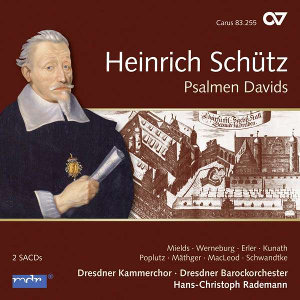