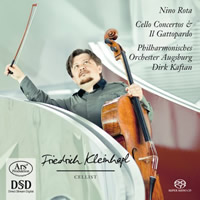 Nino Rota (1911-1976) was born to compose. He conducted his own Oratorio at age 8, his first Opera at age 14. At the age of 20 he left his native Italy to study in America, at the Curtis Institute in Philadelphia. He got to know Copeland and Gershwin (the latter greatly inspiring to him as an example of getting involved with Hollywood as well as having a Classical career). In Italy, such popularism was still regarded as bad form for Classical musicians. Encouraged by Toscanini, he lived in America for 2 years at the beginning of the 1930s and began writing film scores for both Italian and international studios, some 150 in all. At the same time, he was writing operas, choral, orchestra, ballets and chamber works. However, he is known to the general public for his film scores, particularly Coppola's 'The Godfather Trilogy' and Fellini's 'La Strada'.

His two cello concertos were written towards the end of his life, as a diptych in 1972 and 1973 repecitvely. Never a follower of any particular avant garde school, Rota's idiom remained tonal, melodic and these concertos wear their 20th Century harmonic references lightly. The first concerto is essentially Romantic (in both the musical and filmic senses) with a large orchestra including heavy brass, while the second reverts to the more lightly orchestrated Neo-Classical style of the 1930s, starting its first movement with a quotation from Mozart's Violin Concerto in G major, a fitting tribute from one wunderkind to another. At first hearing, the thematic material of the first concerto might seem less distinguished than that of the second concerto, but it grows on one with repeated hearings. The Second concerto is immediately recognisable as a gem, particularly in its long slow movement, a graceful and moving set of variations on a softly musing melody, which is taken from gentle wit to deep pathos, to be followed without a break by a brief playful and muscular romp.

I greatly admired Austro-Belgian cellist Friedrich Kleinhapl's wonderful readings of Beethoven (Beethoven: Cello Sonatas 1-3 - Kleinhapl, Woyke) and Brahms (Brahms: 2 Cello Sonatas - Kleinhapl / Woyke) sonatas, and he doesn't disappoint with these splendidly characterised readings of the Rota concertos. He and the wonderfully-named conductor Dirk Kaftan relish all of Rota's innovative and colourful textures and melodic twists. As well as drawing a limpid, golden singing tone from his Guadagnini cello of 1743 in lyrical subjects, Kleinhapl gives no quarter in Rota's more aggressive or sardonically humorous passages, including some impressively fierce secco (dry) bowing.

In short, these are thoroughly vivid performances which illuminate Rota's vision in a most affecting way. The Augsburg Philharmonic Orchestra, which I have not had the pleasure of hearing before, play magnificently in support of Kleinhapl under Kaftan. I particularly noted wind and horn soloists who literally swap notes with the cellist in duetting, as well as the solo first violinist in the first movement of the first concerto. The orchestra's disciplined ensemble is excellent. Although the strings are not the most alluring above the stave, they nonetheless play very well, the violins divided left and right.

Comparisons with Dmitry Yablonsky's RBCD version in my view gives Kleinhapl the palm for these concertos. The Ars label also provides a substantial extra piece, Rota's music from Visconti's 'Il Gattopardo' (The Leopard), set during the civil action and unification of Italy. Rota conjured a suite of dances based appropriately on Verdi's style (the older composer was a devoted follower of the revolutionary developments). These 7 delicious period dances are exquisitely orchestrated and beguilingly played, Rota in his best cameo mode.

The Ars engineers have given the orchestra a wide and deep sound stage, very well focussed in an airy acoustic and relatively close, equivalent to a front stalls seat. The cello is quite forward but has an acoustic image which is well in proportion, and there are few audible instrument or breathing noises, although Kaftan does make occasional podium noises in the heat of the moment. The 5.1 track is the most realistic, but I found it was very important to have the subwoofer engaged, otherwise the sound was plain and rather brittle, as the sub carries much reverberance information as well as mere filtered LF content.

While certainly not in the same class as the great cello concertos of Dvorak, Elgar and others, these are very attractive works which invite repeated hearings, and it is a pity they are not more often heard live. Rota's own comment on his music making was "When someone says that all I try to express in my music is a bit of nostalgia, lots of humour and optimism, then I think that this is the way people should remember me later. So be it!

A worthy addition to the Nino Rota resurgence, enthusiastically recommended.