I agree with every word of DYB's comment on this recording and am pleased he has saved me writing a review of it. I have listened to it a number of times and find Gardner's ... 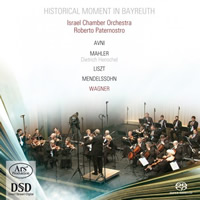 The "Historical Moment" in question occurred on July 26th, 2011, when the Israel Chamber Orchestra gave a concert in Bayreuth, the social centre of the Nazi Regime and where Hitler came to hear the operas of his adored Wagner. It was culmination of the long-held vision of Roberto Paternostro, current Music Director of the ICO, that the ensemble might one day appear in Bayreuth, and play Wagner there. He had the support and help of Katherina Wagner, great-granddaughter of Richard Wagner and current organiser of the Bayreuth Festivals. The concert, however, was part of the Festival's artistic Fringe, and took place in the Bayreuth Town Hall. Paternostro records that Katherina Wagner attended the concert, sitting in the front row, but that she did not have a welcoming meet and greet for the musicians, and she left immediately after the concert. The concert was captured in DSD by the German company Ars Produktion and issued on SACD.

What music could be programmed for such an important and still very controversial occasion? Paternostro put forth one of the best-known elder Israeli composers, Tsvi Avni; Felix Mendelssohn-Bartholdy, a German Jew; Gustav Mahler, a Jew converted to Catholicism; Franz Liszt, a devout Roman Catholic and Richard Wagner, a virulent anti-Semite. There is some kind of logic in this line-up.

The concert opens with 'I Hatikva', the Israeli National Anthem - solemn, measured and richly toned in a colourful setting for the whole orchestra. Avni's 'Prayer' (1962) for strings only, inhabits the worlds of Shostakovich and Stravinsky; canonic, dance-like, with a soft, yielding ending beneath shimmering violins.

Only four of Mahler's Ruckert Lieder were played, omitting 'Liebst du um Schönheit'. Listeners will also be surprised to find that Mahler's orchestration was not used, rather an arrangement by the singer, baritone Dietrich Henschel. This is not mentioned in the booklet other than adding the word "arranger" in German next to Henschel's name. There have been a number of such arrangements for use by chamber orchestras in recent years, presumably as instruments so cumbersome as tuba, celeste, piano and harp pose logistical difficulties on tour. This one is for a small body of strings alone, and is of chamber music scale. It works surprisingly well though, its intimacy highlighting the emotion of the singing. I did, however, miss the marvellously sparse but rich colours of Mahler's original, particularly the harp, which is part of a sonority also used in the Adagietto of the Fifth Symphony. Henshel's singing is deeply sensitive to Ruckert's poetic moods; the lower register of his voice being much darker and authoritative compared with Fischer-Dieskau. It is pointless to make anything other than passing comparisons in a disc of this type, but the first applause track in the programme shows how much the audience appreciated the Mahler.

Mendelssohn's 'Italian Symphony' followed, and by this time the orchestra had got over their not surprising nervousness. They leaped into action to produce a sizzling reading, each movement somewhat faster than usual, and better for it. Full of sunshine and with a brilliantly articulated Saltarello, this performance almost rivals the miraculous one of Holliger, who also has the benefit of a small orchestra where the winds are quite prominent (Mendelssohn: Symphonies 3 & 4 - Holliger). Strong applause greets this fine performance.

Liszt's 'Angelus', transcribed for strings, is a tranquil pool after the buoyant symphony. It exploits the warmth and tonal depth of the ICO's lower strings, and leads into the final (and still highly controversial) piece, Wagner's 'Siegfried Idyll'. The story of the work's origin is well-known, as a birthday present to his second wife, Cosima, after the birth of their son Siegfried in 1869. It was played by musicians on the villa stairway. and thus scored for chamber ensemble rather than full symphony orchestra as often heard nowadays. since Wagner's music is still strongly rejected by many in Israel, the orchestra could not rehearse it there even behind closed doors. On their mettle in the Bayreuth hall, they play it with freshness, charm and elegance, and some breathtakingly transparent textures. There is no applause on the disc, but in the concert, the audience rose to its feet in appreciation.

Sonically, the Ars engineers have made a good job of capturing the atmosphere of the town hall, packed with people, yet with some reponsive acoustic presence, especially in 5.1 multichannel. The image of the orchestra on the stage as shown in the booklet photos is reflected in the sound-field. Inevitably there a few audience noises and clatter from musicians, as well as some hearty podium thumps from a very enthusiastic Paternostro at climaxes. Also a 'feature' of live performances, there are some small discrepancies of pitching and a few smudged entries from the musicians, but nothing to seriously affect this historic performance. There are plenty of notes and quotes in German and English about the political and emotional issues raised by this visit by the Israelis to Bayreuth (where there was opposition even from the small remaining local Jewish community), although only skimpy notes about the music.

This unique SACD has two main aspects, only one of which is its musical and sonic quality. Most importantly Ars have published a recording of a momentous step in the progress of disentangling Wagner's music from its appalling association with the Holocaust victims, as brought about by the Nazis. An 80 minute long first-order historical document in itself, the disc is self-recommending. I hesitate to give stars, but do so purely as a personal response. And I wonder if one may dream that some day in the (distant?) future, there will be another and perhaps greater "moment", when the Israel Philharmonic plays a concert on the stage of the Festspielhaus itself.