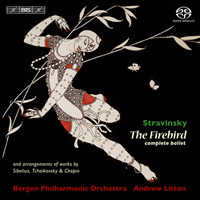 
The Firebird was Igor Stravinsky’s first full-length ballet, but not his first collaboration with Diaghilev and his Ballets Russes. In 1909, a year before the triumphant première of The Firebird, the charismatic impresario had commissioned Stravinsky to orchestrate two piano compositions by Chopin for use in another project.

Evidently pleased with the result, he invited the young composer to write the music for the next production of his ballet company, to a scenario based on various well-known Russian fairy-tale characters. The score holds several moments that recall Scriabin, Tchaikovsky and Stravinsky’s teacher, Rimsky-Korsakov, but the mature Stravinsky is already present in the superb orchestral craft and the vivid rhythmic imagination.

Rather than either of the two suites which Stravinsky later prepared, Andrew Litton and the Bergen Philharmonic Orchestra have chosen to record the original ballet score, allowing us to relish the enormous range of colours springing from what the composer later described as a ‘wastefully large’ orchestration. Soon after The Firebird, Stravinsky went on to influence the direction of music with Petrushka and The Rite of Spring – two scores which appear on a recent release with the same performers.

That much acclaimed disc was short-listed for a 2011 Gramophone Award, named Editor’s Choice in Classic FM Magazine, and selected as Disc of the Month by the websites Classics Today and Classics Today France, and the recording itself was praised on a par with the interpretation and playing, with the reviewer in International Record Review describing ‘the efforts of the BIS recording team’ as ‘truly magnificent’.

The present disc includes not only The Firebird, but also the above-mentioned Chopin orchestrations, as well as arrangements of pieces by Tchaikovsky and Sibelius, ending with Stravinsky’s tongue-in-cheek 1955 Greeting Prelude for the 80th birthday of Pierre Monteux, the conductor who had given the world premières of both Petrushka and The Rite of Spring some forty years earlier.

At a first glance there would appear to be is no shortage of recordings of Stravinsky's 1910 ballet 'The Firebird' on SACD. Yet closer inspection reveals that the important and venerable recordings by Antal Dorati and Robert Craft are not now widely available except for those with large bank balances, while that conducted by Yoel Levi on the Glossa label is not only a fairly dull performance, but will be further ruled out for many listeners by the exaggerated dynamics of the recording that makes listening to it a frustrating experience, unless that is one's hand is kept close to the volume control.

Now thanks to Andrew Litton, the Bergen Philharmonic orchestra and BIS, we have one of the finest accounts of the complete ballet to appear for some time - one that will, in nearly every respect, satisfy the most demanding listener and bring a smile to the face of the seasoned audiophile. Litton's thrilling performance is a winning combination of textural clarity and muscular strength in equal measure. Though in the main quite leisurely (overall it lasts some six minutes longer than Dorati's MLP version), it does allow Litton and the orchestra to reveal details in the score that fail to register on some other recorded versions. Try the 'Carillon féerique' (Tr.12) to experience a glimpse of the excitement and thrust Litton brings to this work as a whole. Every section of the Bergen orchestra perform with commendable precision, but the limpid woodwind deserve special mention, and I particularly liked the forthright playing of the principal horn in their many solos.

The bright BIS 24bit/ 44.1 recording produces an orchestral image of great solidity and satisfying depth, though some may wish that it had allowed a little more warmth to be given to the Bergen upper strings, and perhaps greater weight and depth to the bass end of the spectrum. Such criticisms only become apparent when direct comparison is made between the same passages on this recording and those from Ivan Fischer's recent recording with the Budapest Festival Orchestra Stravinsky: L'oiseau de feu, Le Sacre du printemps - Fischer . A full comparison, however, is not possible, as Fischer only gives us the 1919 Suite not the full score, but the marginal superiority of Channel's DSD recording is not in doubt.

The fill-ups – arrangements of music by Tchaikovsky, Sibelius and Chopin - are examples of Stravinsky the master orchestrator seen in an unfamiliar light, while the birthday 'Greeting Prelude' written for the 80th birthday of the conductor Pierre Monteux is a fine example of the composer's concision and acerbic wit. Though none of these pieces can be regarded as essential Stravinsky , all are none the less most entertaining.

This SACD makes a most welcome companion to Litton's earlier BIS Stravinsky disc Stravinsky: Le Sacre du printemps, Petrouchka - Litton and it is hoped that some of the composer's later less familiar ballets such as 'Jeu de cartes' and 'Scènes de Ballet' may eventually appear from this source.

Warmly recommended as the undoubted current first choice for 'The Firebird' ballet. 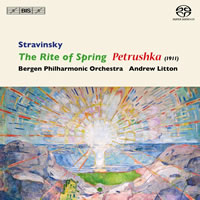