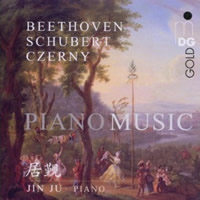 
Splendid Recital
Jin Ju recorded a classical bestseller in China, and her Schumann debut CD on MDG shows why: such a clear, unpretentious virtuoso has only rarely been heard, one whose enormous musical intuition enables her to convey and interpret even the most hidden musical messages. A recital now follows in which Jin Ju displays an even broader spectrum of expressive means. Beethoven’s Appassionata demands the greatest virtuosity and musical stringency, Czerny’s Ricordanza Variations are not stingy with sophisticatedly placed, sparkling figuration, and Schubert’s Sonata in C minor lavishes in a writing style relying very much on cantabile. The fact that these works were written during the space of twenty years and thus practically at the same time enhances the appeal of this recording.

Romantic Solo
Beethoven’s Piano Sonata No. 23 in F minor op. 57 numbers among the composer’s best-known works and is regarded as the epitome of romantic solo virtuosity. Its virtuosity is never ostentatiously taken to the extreme but employed rigorously and systematically as a means of expression, of passion. No wonder that this work so incredibly charged with energy later earned the name of the Appassionata.

Sonata Glory
What a very different work was created only a few years later in Schubert’s Sonata in C minor from 1828, the year of his death! Although a few themes continue to recall Beethoven, Schubert completely frees himself from traditional forms, and the music seems also to lose itself in improvisational suggestions and states of suspension – as a result, the passages never seeming to want to end and glorified by Schumann as “heavenly longueurs” can
be experienced directly.

Stunning Virtuosity
Those who associate the name of Czerny solely with the exertions involved in the practice of finger exercises in piano instruction should absolutely take the opportunity to acquaint themselves with the works of this brilliant pianist. Alone the sophistication with which Czerny has the fifth variation go over into a virtuoso cadential passage and then into a furious presto is stunning. When this is done with witty nonchalance and so brilliantly as here in colossal 2+2+2-Steinway-Multichannel-Sound the wish to press the repeat button becomes an automatic reflex.

Although this disc has no competition on SACD for the Czerny and practically none for the Schubert (an expensive stereo-only disc), there are of course several for the Beethoven on SACD and for both sonatas a myriad of alternatives on RBCD.

On SACD, Jin Ju's main competition in the Appassionata must count Beethoven: Piano Sonatas, Vol. 1 - Tchetuev and Beethoven: Complete Works for Solo Piano, Vol. 06 - Brautigam; both are highly individual and dramatically different, not least because of the different instruments employed (Brautigam of course is using a fortepiano). As far as timings go, Jin Ju opts for something close to Brendel’s last account for the first & second movements and Gilels acclaimed performance of the third movement. At no time do the tempi approach the close-to-breathless (but excitingly so) of Brautigam but neither does the first movement spread out as it does in Gilels’ hands.

Timings though, can hide a great deal of a performance, yet there is little that Jin Ju hides here - her playing is extraordinarily clear & luminous which is helped by playing one of the very best instruments captured on disc and the tangible engineering. The repeated quavers nag insistently and if one cavils that the second subject on first presentation is too relaxed, when it reappears all doubts vanish. Of course, a Steinway piano - no matter how good condition it is in & the recording quality - can not rival the clarity of sound afforded to Brautigam in the passages of dense chords in the lower registers but through great slight-of-hand, Jin Ju nearly manages the same sense of attack that Brautigam can employ without preventing all the harmonic and melodic details from being audible. Gilels manages a similar feat but then takes nearly half as long again as Jin Ju, never mind Brautigam. The “free” arpeggiated sections will likely decide listeners as to whether Brautigam goes too close to the edge or not for comfort - certainly Jin Ju, whilst exciting, always sounds perfectly in control.

As when re-hearing pre-HIP orchestral accounts of the Beethoven symphonies, one can feel that “slow” movements don’t have the courage of their convictions and neither go for a truly flowing tempo or one where musical phrases are in constant danger of fragmentation. So it is the case here; despite the surface beauty, there is neither the repose that Gilels bought to the music nor the flow that Brautigam manages. The finale is taken at a quick tempo but not one that can sound harried in the wrong way as Schnabel’s otherwise magnificent account demonstrates - here is one place where Brautigam definitely reigns supreme for those looking for a lightening finale. Jin Ju’s judicious choice of tempo while keeping the adrenalin level high, allows for all the details from the score to be registered by the ears whilst the eyes are closed. More naturally than earlier in the sonata, Jin Ju applies a very natural sense of rubato and voice leading that adds greatly to the musical journey. Somewhat controversially, after a thrilling coda, the last three chords are not separated by the pedalling - which may jar in some ears.

The Czerny has no competition on SACD and - Horowitz apart - precious little on other media; even if it did, modern competition would have to be very special indeed. Throughout the more outwardly virtuosic passages, one can hear the smile that must surely have been on Jin Ju’s face and it is reflected in that of the listener, so delightful and coquettish is her touch and phrasing. Wonderful stuff and some of the best piano playing issued this year.

As one might expect Jin Ju’s Schubert is just as musical as the Beethoven and Czerny that came before. Her timings are conventional in all except the last movement where she markedly more relaxed than her more established competitors such as Brendel, Perahia, Pollini & Richter. Nothing escapes the control of her fingers though and Jin Ju steers a fine course between the Beethovenian storm and bitter-sweet beauty so particular to Schubert in both the opening movements. The repose in the slow movement is most affecting yet when the accompaniment adds movement underneath the theme, there is no sense of either haste or tardiness. Like all the above mentioned competitors, Jin Ju manages to make the “throwaway” Scherzo & Trio sound more profound than it appears on paper and the finale gains from the slower than usually adopted tempo. The major gains are twofold: the textures are clearer (a particular benefit to the left hand passage work & chordal sequences) and dynamic contrasts achieved sound more natural as the ear has fractionally more time to adjust.

As already mentioned, the sound of the piano in terms of the playing, the instrument itself and the engineering are all outstanding and of the highest possible beauty.