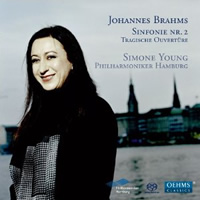 
"Powerful Brahms from Hamburg!” – This is what Gramophone Magazine said in March 2011 about the recording of the First Symphony with the Hamburg Philharmonic under the baton of Simone Young on SACD.

Now, maestro Young presents the Second Symphony in proven audiophile sound in a meeting between the traditional and the modern. The work was recorded live in the Laeiszhalle in Hamburg in October 2010.

After a disappointing experience with Brahms: Symphony No. 1 - Young, it is a welcome relief to turn to this next installment in Young's Brahms cycle.

Although the conditions of recording are the same (concert performances), the Philharmoniker Hamburg seem much more at ease with their intonation and also Young's conception of this most darkly sunny of symphonies. Like all the best interpreters of this work, Young manages to let the ruminations meandering beneath the surface distort the otherwise sunlit facade to an unnerving effect. [NB - despite my imagery, I am not for one moment suggesting that Young distorts Brahms into Mahler or similar!] The tempo for the opening movement is the epitome of the slow waltz and for the most part the orchestra revel in their music making; only at certain corners does one hear snatched phrase endings but that is more than made for by the playing of the horns who manage to link their sonorities explicitly to those heard in the first symphony chorales. For those that it matters, the exposition repeat is observed and the return to the opening is well handled - no jarring at all.

Young's Adagio is similarly of moderately chosen tempo - not stretching the fabric as heard on Brahms: 4 Symphonies - Manze but relaxed enough so there is lilting feeling carried over from the first movement. As some of the central climaxes are approached, Young demands step-ups in tempo and the strings sound reticent, perhaps even a little surprised - a shame for it undermines a lot of otherwise very fine playing and model conducting of "natural" rubato (unless wants near-histrionic levels of intervention from the podium). Likewise, the third movement is very pleasing on the ear - the tempo changes here are far better handled and the "Presto ma non assai" passages lift off like the proverbial rocket whilst maintaining a delicacy that matches it with the "Quasi andantino" sections; very exciting indeed.

The finale is taken fast, just faster than Manze & Jansons (Brahms: Symphonies 2 & 3 - Jansons) but by well over a minute from Abbado/BPO (RBCD only); though the main difference is the degree to which the conductors allow themselves to relax in the more pastoral passages. One criticism is the degree to which Young asks for the tempo to be held back before the return of the opening theme - it just feels slightly too much and destroys the onward build-up of momentum. The main body is certainly a tour de force for the orchestra & for the most part, they and Young should be rightly proud of their achievements (although some runs reveal slightly fraught relationships with the notes in the violins).

The "encore" of the Tragic Overture is given a similarly flowing reading, which makes for a high-voltage reading. Sadly, like the finale of the symphony, there are moments when the tuning goes awry (and a patching session would surely have been highly beneficial) but no-one can doubt the passion and commitment that Young gets from her orchestra.

Slightly frustrating is the audience noise that is present just before the overture & between each movement (there is no applause included), for during each performance the microphones have clearly been set in such a manner that extraneous noises are omitted. It is to the credit of the performers that so much of their playing withstands such close scrutiny (there are moments when it doesn't) and nice that the sound isn't too unnatural as a result. 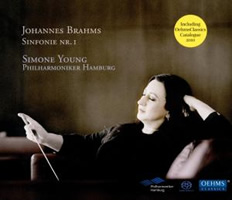 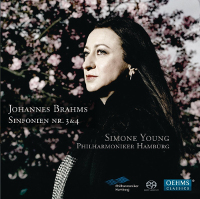